On 1 January, Anirudh organised a meeting with 7 young villagers from Zari who had earlier undergone four-wheeler driving training through Satpuda Foundation’s livelihood program. During this meeting Anirudh explained to the young villagers about an employment opportunity driving E-rickshaws with Uber.

Similar meetings were organised in Nagartas and Barukheda on 2 January and in Dhargad on 12 January.

On 11 January, Anirudh organised a meeting for women from Zari village. During the meeting, Anirudh explained the importance of Self Help Groups (SHGs) to the women. He provided information about registration process of SHGs with the Panchayat Samiti and the Maharashtra State Rural Livelihood Mission (MSRLM) scheme. During the meeting various ideas regarding micro-enterprises were also discussed.

In January, our team conducted 5 classroom sessions as part of wildlife and environment education program in schools of Pingali, Bhingara and Zari villages. During these sessions, Kushagra, Anirudh and Deepak taught students about various birds that migrate during winters. Kushagra taught the students how to identify various trees and explained their uses for both humans as well as wildlife. Our team also conducted interactive games to explain about concepts of water conservation to the students. A total of 128 students and teachers from 3 schools participated in these sessions.

Posted by Rajashree Khalap at 12:53 AM No comments:

On January 10th, 16th and 18th, we organised cleanliness and anti-plastic programs with villagers of Dewada, Katwal, and Mudholi. Programs were organised in order to sanitise the area around villages as litter and food leftovers sometimes leads wildlife to venture into the village and causes man-animal conflict. We collected over 7 kilograms of plastic litter through public participation (Voluntary work project). A total of 98 villagers including members of women’s Self-Help Groups (SHGs) volunteered for these activities.
On January 29th, we organised a forest foot patrol jointly with Forest Department involving local young villagers of Khutwanda village. 7 young villagers participated in the patrol.
On January 19th, we constructed a check dam near Kondegaon village through Voluntary work project. 19 villagers volunteered for the construction work.
Education Program
During January, we organised 12 environment education  programs in Zilla Parishad schools of Khutwanda, Katwal, Sitarampeth, Bhamdeli, Dewada, Adegaon and Junona. We  organised these programs with students and teachers in order to make them aware of the importance of biodiversity and conservation. We taught them about nature and wildlife’s value through interactive sessions and various nature games. A total of 383 students participated in the programs.
On January 9th and 14th, nature clubs ‘Leopard’ and ‘Drongo’ of ZP schools, Kondegaon and Bhamdeli, set up  kitchen gardens on their respective campuses. 26 students of the clubs participated in the activity. 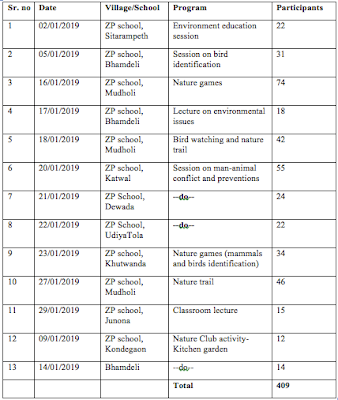 Employment Cell
We organised 9 village eco-development committee (VEDC) meetings and 6 women Self-Help Group (SHG) meetings, focusing on alternative livelihoods which would reduce dependence on the forests that leads to man-animal conflict and degradation of forests. A total of 379 villagers attended these meetings and shared their thoughts.
We have also submitted a list of 50 eligible young villagers of Moharli buffer to the Forest Department along with a proposal to organise a four-wheeler driving training program.
In the SHG meetings, we discussed about forming a group of interested members who are willing to undergo training in embroidery and in making paper bags. The training will be provided by Nehru Yuva Kendra, Chandrapur. A total of 135 members attended these meetings.
In VEDC meetings, we discussed and explained short- and long-term benefits of fodder plantation. We also discussed about man-animal confrontation in the Moharli buffer area and how to reduce this by adopting cattle sheds and stall feeding for their cattle. A total of 244 villagers attended these meetings.
Details of the programs are given below: 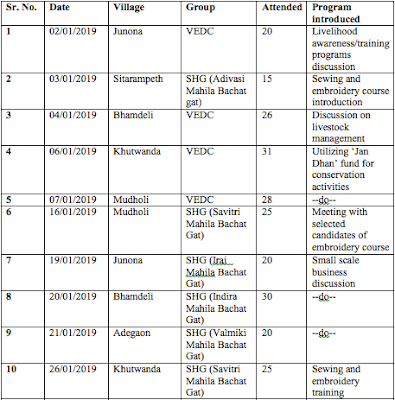 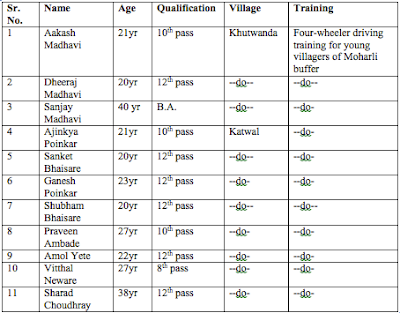 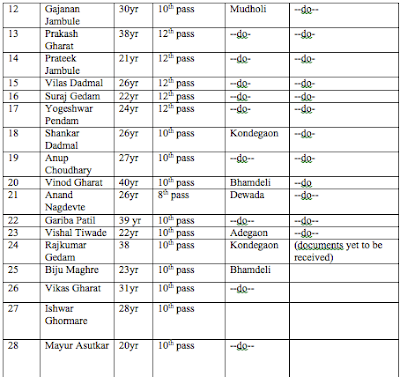 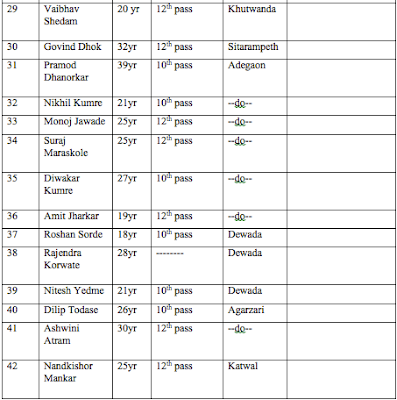 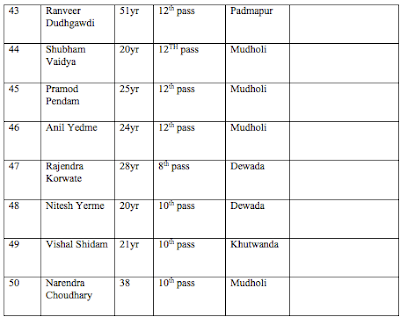 Posted by Rajashree Khalap at 6:29 AM No comments: