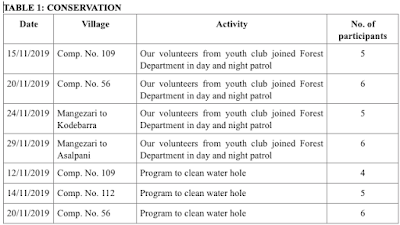 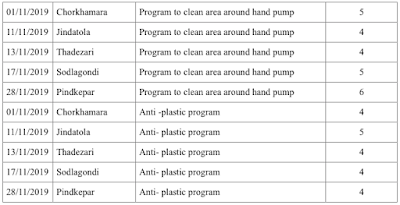 Our team organised 3 programs on November 12, 14, and 20 to clean water holes in Compartment No. 109, 112 and 56. Unemployed young villagers from Mangezari participated in the programs, led by Mukund (See Table 1).

Our team organised 5 community assistance programs on November 1, 11, 13, 17 and 28 to clear areas around hand pumps at Chorkhamara, Jindatola, Thadezari, Sodlagondi and Pindkepar. Unemployed young villagers from Mangezari participated in the programs, led by Mukund.

Water had spilled over while people drew from the hand pumps and had stagnated, leading to proliferation of mosquitoes and insects. Our teams cleared the area, removing scum and organic growth, and dug canals to drain away the water.

Our team joined the Forest Department in day and night patrols in Compartments No. 109 and 56 and on paths linking Mangezari to Kodebarra and Mangezari to Asalpani. Besides our staff, volunteers from the Youth Club at Mangezari also joined in the patrols. The Youth Club was set up with our assistance and is mentored by our Conservation Officer Mukund Dhurve.

During the month, our team organised 5 anti-plastic programs to clean polythene/plastic litter from villages. The programs were organised on November 1, 11, 13, 17 and 28 at Chorkhamara, Jindatola, Thadezari, Sodlagondi, and Pindkepar villages respectively. Mukund organised the programs which were attended by villagers and village eco-development committee (VEDC) members. The plastic litter has been kept in our Mangezari office and will be sent to Tiroda for recycling.

On 26 November, we built a check dam in Compartment number 56 as part of our water conservation programs. Besides conserving water, the check dam will also provide drinking water for wildlife in the area.

There were 6 education programs in November.

From 5th November to 12th November, we celebrated “Pakshi Saptah” in memory of Shri Maruti Chitampalli and late Dr. Salim Ali’s birth anniversaries. We organised various programs during the week, including a demonstration on making artificial nests from used cardboard boxes, nature trails and presentations in classrooms. We gave information about both ornithologists to students and teachers.

Posted by Rajashree Khalap at 7:00 AM No comments: 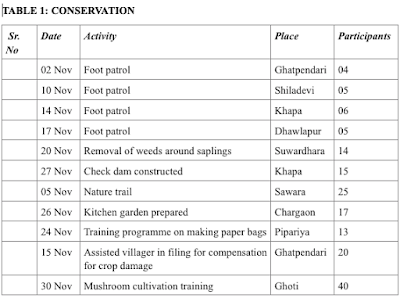 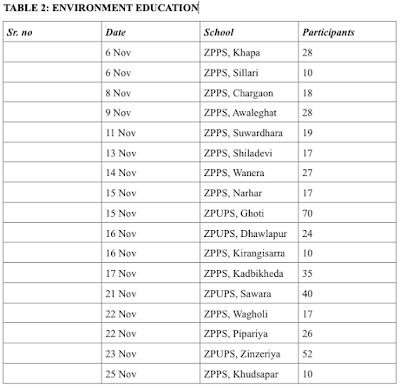 
On 2 November, following reports of the presence near Ghatpendari of a large carnivore, possibly a tiger, Bandu motivated 3 local young villagers to patrol the area to keep track of the animal’s movements. During the patrol, the team assisted the Forest Department staff in checking for any illegal activity like logging, and placing of snares for poaching. They also looked out for any indirect signs like pug marks, scat or scratch marks made by tigers, leopards or sloth bears. The team also checked for signs of illegal grazing inside the forest. No illegal activity was detected during the patrol. The team encountered signs indicating the presence of ungulates like wild boar, sambar deer and axis deer.  Similar patrols were carried out along with Forest Department staff in Shiladevi, Khapa and Dhawlapur on November 10th, 14th and 17th respectively.

On 27th November, Bandu and Dilip encouraged 15 villagers from Khapa to construct a check dam near the village to provide water for wildlife during the summer season.
On November 15th, following requests from farmers of Ghatpendari, Bandu assisted 20 farmers including the Sarpanch and Police Patil, in filing for compensation for their crops damaged by wild herbivores. While assisting the villagers, Bandu also explained to the farmers the various steps they could take to check crop raiding by wildlife. Speedy settlement of compensation claims helps improve the farmers’ morale and reduces the likelihood that they will seek revenge against wildlife for the crop damage.

On 5 November, Dilip took 25 school students from Sawara village on a nature trail in the forested area adjoining the village. While on the trail, Dilip provided information on various plant and tree species. The students identified trees such as teak, palash, mahua, neem, banyan, fig and salai. Dilip explained that the trees not only provide people with many medicines and fruit but also support numerous animal, bird and insect species. Dilip helped students identify hoof marks of herbivores like wild boars and sambar deer. During the trail, the students also observed many birds like Rufous Treepie, oriole, Coppersmith Barbet, Yellow-footed Green Pigeon and Indian Grey Hornbill. Dilip helped the students observe the differences in the shapes of beaks, feet and wings of the birds.

There were 6 medical camps in November in which 200 patients were treated.

Posted by Rajashree Khalap at 3:16 AM No comments: 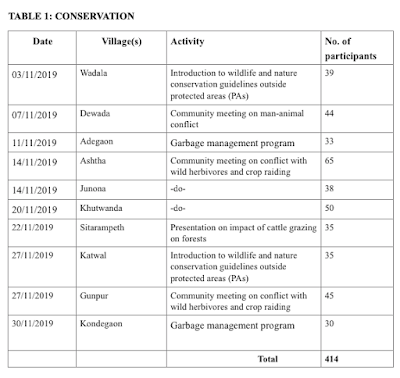 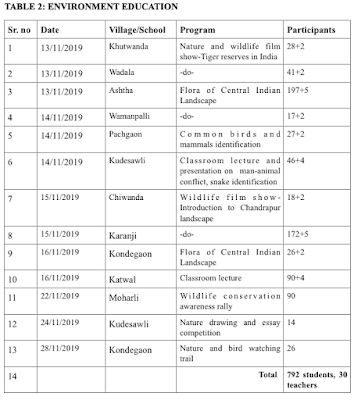 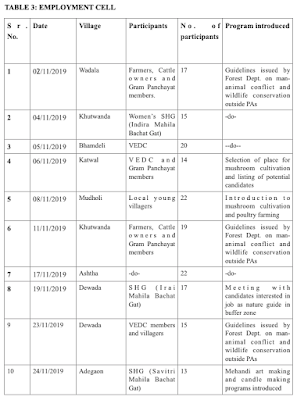 Highlights of the month: SEE TABLE 1


During November, we organised several meetings with villagers focusing on reduction in human-animal conflict. We introduced the villagers to the recently released human-animal conflict Resolution issued by Maharashtra Forest Department.  To spread awareness, we spoke to the community members about potential threats and the danger of venturing into the forest areas for fuel wood, mahua, tendu collection etc. As the Tadoba area has a good tiger breeding population and other large carnivores, encounters sometimes turn fatal for villagers, often leading to retaliatory killing of wildlife. Resolving issues like garbage dumps around villages, cattle grazing, minor forest produce (MFP) collection and unemployment, help in reducing human-animal confrontation.

We also focused on wildlife movement outside protected areas (PAs). Wild herbivores like blue bulls, spotted deer, sambar deer and wild boar also pose a threat to villagers by raiding farms, damaging the crops and sometimes attacking farmers. Farmers suffer losses in these depredations. Farmers were told to maximise the usage of solar-powered fencing to try and deter wild animals from their farms. Our team is preparing a list of farmers who are willing to set up solar-powered fencing around their farms. 394 villagers attended these meetings.

We organised garbage management meetings and activities with villagers of Khutwanda and Kondegaon. Programs were organised in order to sanitise the area around the villages, as garbage spillover and food leftovers lure wildlife into villages and cause human-animal conflict. We collected over 5 kilograms of plastic litter through public participation. 65 villagers including members of the VEDC (Village Eco-Development Committee), and children participated in these activities.

During  November, we organised environment education programs in Chiwanda, Karanji, Kondegaon, Kanargaon, Gunpur, Kudesawli, Wamanpalli, Pachgaon, Khutwanda and Katwal villages. We  organised these programs with students and teachers to make them aware of the importance of biodiversity and conservation. We taught them about nature and wildlife’s value through wildlife films, documentaries, presentations and classroom lectures. 662 students and 30 teachers participated in the programs.

Students of Nature clubs ‘Wagh,’‘Bibbat’ and ‘Ashwal’ from Moharli, Kudesawli and Kondegaon participated in a wildlife conervation awareness rally, drawing and essay writing competition and a nature trail. 120 students participated in these activities.

We organised 8 Village Eco-Development Committee (VEDC) meetings and 3 Self-Help Group (SHG) meetings focusing on alternative livelihoods which would reduce dependence on forests. Forest dependence leads to human-animal conflict and degradation of wild habitat.  209 villagers attended these meetings. In the SHG meetings, we discussed several livelihood related issues. We formed groups of members who are willing to be trained in making paper bags and in embroidery.

As there is increasing tourism in buffer zone of Tadoba, some villagers requested us to organise a workshop to train women as nature guides. We shared success stories of women guides trained by us in Priyadarshini Pench Tiger Reserve, Madhya Pradesh. 45 members attended these meetings.

In the VEDC meetings, we discussed human-animal conflict and wildlife conservation guidelines outside protected areas (PAs). We also focused on increasing usage of solar-powered fencing in farm lands to prevent conflict with wildlife, and to reduce the incidence of wild animals being killed by electrified fencing. We also discussed and explained short- and long-term benefits of fodder plantation. We discussed the rise in human-animal confrontation in and around Moharli and how to prevent this by adopting cattle sheds and stall feeding for cattle, to prevent straying of the animals into forests and falling prey to carnivores around the area. 144 villagers attended these meetings.

Following a request from villagers, we organised a workshop on mushroom cultivation for residents of Katwal. We had earlier trained villagers in Pench to cultivate and market mushrooms, and their success has drawn villagers from Tadoba to emulate them. Mr. Abhimanyu of Sky Mushrooms, Nagpur visited Katwal and spoke to the candidates about mushroom cultivation and marketing etc. 20 interested candidates attended the workshop. Some of them also prepared a first batch of mushroom spawn for cultivation. They are cultivating oyster mushrooms as the local climate is suitable for it.

Posted by Rajashree Khalap at 5:26 AM No comments: