They all jokingly called him ‘Shabari Baba’ and ran away the moment he came in sight. One night after our round of medical camps in the designated villages in Pench, he sat down with me and chatted up. Slowly the conversation turned towards religion and his favourite topic, Ramayan and how devoted Shabari was to Ram. I realized now why people called him so. He was more than 60 years now living with his wife and did not have any kids. Most of the time he spent soaking up religious books, songs and sermons for the entire village….a very mild-natured pious man indeed. 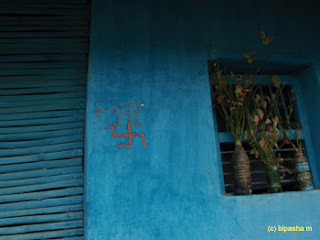 The village Mela was being held at the periphery of the forest. There was palpable excitement in the air. Villagers were slowly trickling in from all across dressed in their finest Sunday clothing. There was food, bangles, photo-frames of gods, household items and even games. The Mela was filled with mothers, kids, young guys and girls. 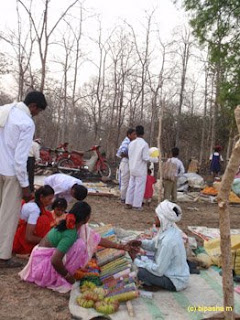 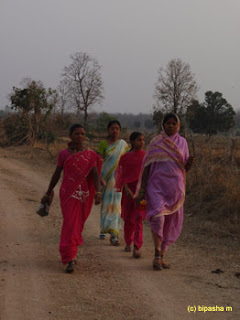 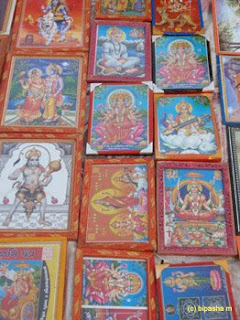 We talked to a guy handsomely dressed hanging around with his friends. He explained us the games especially the one where one had to climb a slippery pole to get to the prize. Next day while on our way to the SF office, we heard a commotion at the village market. Somebody had consumed poison and the SF van rushed him to the nearest hospital. As it turned out, it was the same Mela guy who had consumed poison because of a ‘love’ issue. One day happy and boisterous, and the next day its passion-play. Who could have guessed. He managed to survive. 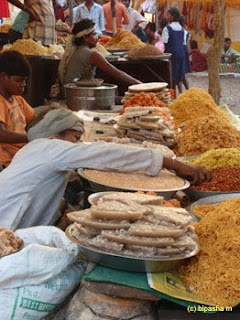 While on the field, we had our lunch in the villages itself cooked by a family. They were given the necessary food items and some money for the service. By the time we finished our camp, food would be ready – piping hot. In every house where we had our lunch, it was served with so much warmth and love. And for all of us there, it was the best food ever eaten….so much that we all ended up over-eating. 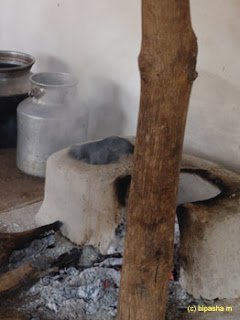 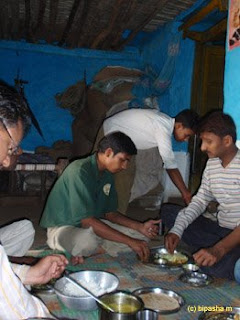 Life and people in these villages are so simple with simple needs and demands. Small things give them happiness and each incident becomes a big event for them to talk about. In the last few months I have gone in other villages and spoken to villagers. I realized that given the right knowledge and guidance, they are all willing to go the right way. Tell them plastic bags are harmful and they will use a single one for months.

It’s us city folks who are the most obstinate about the idea of change. Tell a city person not to use plastic and you will see the next person carrying 5 bags out of a shopping mall. We, who are seemingly educated and know the status of our world, refuse to change. Because we refuse to give up even an iota of luxury for anything good.

Email ThisBlogThis!Share to TwitterShare to FacebookShare to Pinterest
Labels: medical camps for villagers, programmes and initiatives 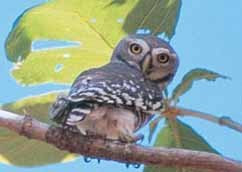 If you're wondering what "Duda" means, it's this charming little bird, the Forest Owlet. Duda is its name in the language of the Korkus, a tribe that live in Melghat Tiger Reserve and elsewhere in the Satpudas.

For more than a century the Forest Owlet was thought to be extinct. But in 1997 it was rediscovered in Melghat by three Americans, including the famous ornithologist Pamela Rasmussen. Melghat is one of the most important habitats for this unique, highly endangered species. 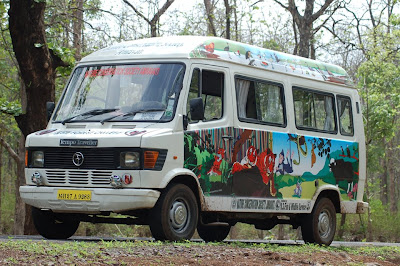 When Nature Conservation Society of Amravati (NCSA) started the nature education programme in 2005, they cast around for a suitable name for the van that was going to be the hub of the activity. "Duda" was the name chosen. It was a friendly and familiar word among the Korkus, and the van was after all going to spread a positive message about the Forest Owlet and other endangered creatures. 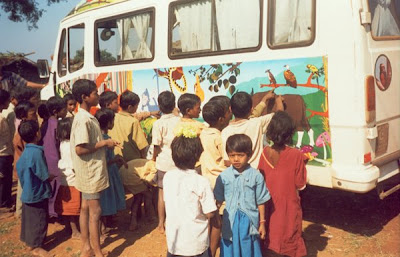 It was a perfect choice of name. "Duda gadi" (Duda car) proved to be a great hit with the Korku kids, and its regular visits are an eagerly anticipated event in the villages of Melghat.

The Education team are in the field for a fortnight at a time, travelling from village to village with the programme.

Children and adults are taken for nature walks around their village, and educated about the many treasures there. They are taken for forest safaris in the Duda Gadi. They play games specially designed for these workshops, including one called "Web of Life" (picture below). In the evening when the adults are free, they are shown films about wildlife and nature and its protection. 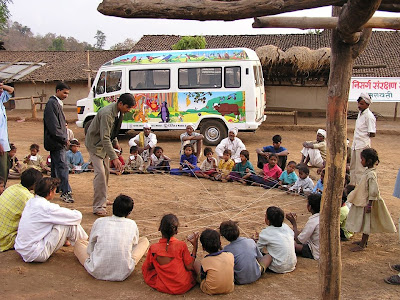 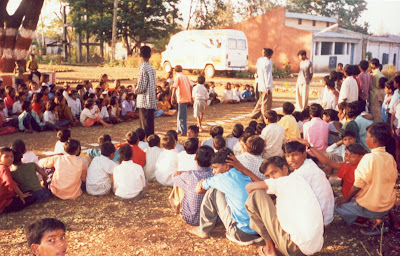 Conservation activities are included in the education programme. Below: a tree plantation drive. 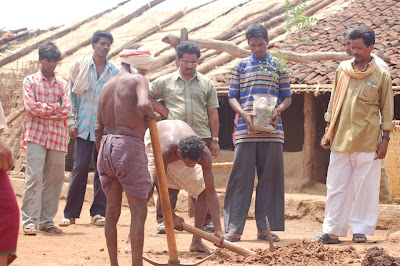 And coming back to the original Duda, the Forest Owlet itself...you can read more about this bird in an article by Kishor Rithe (President, SF) in our website. To see our site, click on the logo on the top right, or else scroll down to "Links" below. Select "Articles" in the site and you'll find the one on this owlet.

The education programme pictures were sent by Vishal Bansod for this blog. I borrowed the picture of the Forest Owlet from our website. 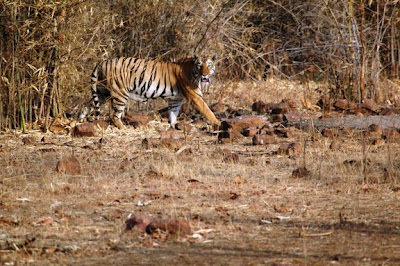 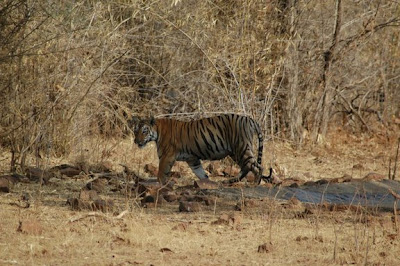 This is a magical co-incidence! On 29 April I posted pictures of a gorgeous tigress I saw in Tadoba-Andhari last year. I mentioned that I hadn't ever seen her again.

Well, on that very day my friend Shonali Laha saw her in Tadoba and clicked these pictures. She didn't of course know that she'd seen my tigress, and I only realized it myself while looking through her photos this morning.

Perhaps Shonali was clicking these at the very moment that I was posting my story here - who knows?

Anyway, I am absolutely thrilled to see that she is well and looking as stunning as ever. This girl would win any tiger beauty contest paws down.

Shonali, thanks for letting me post your pictures here!

Photos: Shonali Laha
Posted by Rajashree Khalap at 9:36 AM No comments: 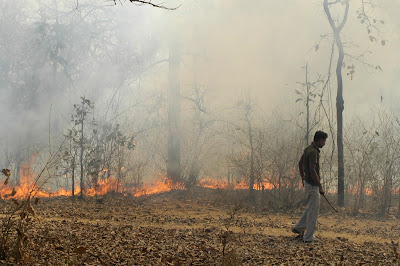 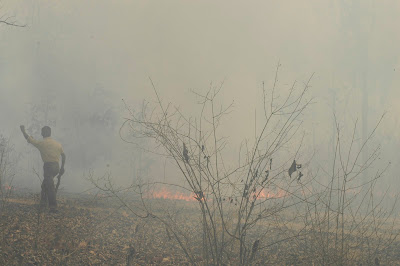 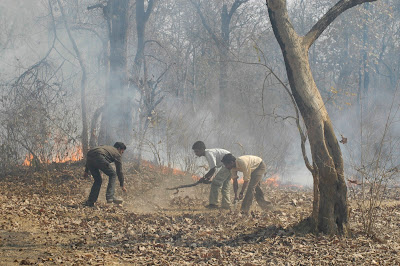 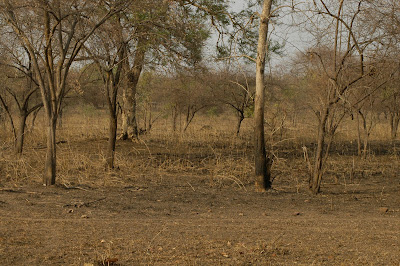 Forest fires are a huge problem in summer, and they can lay waste extensive areas if not immediately checked. They are usually started by villagers living inside the forest. The aim is to clear the ground of dead leaves, making it easy to collect fallen mahua flowers and tendu leaves. Mahua flowers are used for making the alcoholic beverage of the same name, and tendu leaves are used for making "bidis" (cigarettes).

Sometimes the locals also start fires to scare wild animals into running out - making them easier to hunt.

The slightest change in wind direction can start an enormous conflagration and cause immeasurable damage to wildlife and the forest. Given that protected areas are almost always understaffed, it's rare that a fire gets put out quickly.

I took the first three photos in Bori-Satpuda Tiger Reserve in March this year. We saw the fire on our way out of the reserve after completing our four day medical camp. Luckily there were seven of us on this trip and we managed to create fire lines and control the blaze before the forest staff arrived. I must admit I found it scary to be so close to the rapidly shifting flames and intense heat. There were moments when the fire seemed to be racing towards us.

The fourth picture I took in Tadoba-Andhari Tiger Reserve last week. These charred trees are all that remain of the once-lush meadow of Pandarpaoni, a favoured spot of herbivores in the reserve. A month ago a huge fire burned down all the lovely long grass, in which even tigers could remain hidden. Again, local villagers are believed to have started it.
Posted by Rajashree Khalap at 12:43 AM No comments:

One of the programmes of Satpuda Foundation and NCSA is distribution of clothes to tribals and other villagers living in and around tiger reserves. If you visit these communities you will see that they are cripplingly poor and some of the children are dressed practically in rags - a sad state to be in, specially in winter.

We usually follow a "clothes for work" scheme, that is, the clothes are distributed after the villagers have completed some stipulated community conservation work. We also sometimes distribute them on a need basis, after our medical camps.

A number of people have been donating clothes regularly for the bank, and from last year I started collecting from my friends in Mumbai as well. I take them to our office in Amravati whenever I go there but I am thinking of sending them by train/road transport at regular intervals if we can collect enough. At present this appeal applies only to people in Mumbai, Nagpur and Amravati, but later it would be great if we could spread this idea around to other places as well.

If you live in Mumbai and would like to donate clothes, please email me on rajashree.khalap@gmail.com
Some points to keep in mind:

1. All donated items should be in usable condition, not torn or badly stained.

3. These villagers are extremely thin. And city people often aren't.
So I am looking for medium and small sizes at present. Of course it is possible to alter larger sized clothes, and at a later stage we can possibly do that too.

4. All kinds of children's clothes will come in useful.

5. Warm clothes are needed for all age groups (shawls, woollens)

7. These items would all be very useful: bedsheets, blankets, mosquito nets, towels, pillows.

8. Items for children like school bags, boxes for pens and geometry sets etc are welcome

Do spread the word about our Clothes Bank - it's a great way to recycle our unwanted clothes, and it really makes a difference to these communities.

Posted by Rajashree Khalap at 8:05 AM No comments:

Email ThisBlogThis!Share to TwitterShare to FacebookShare to Pinterest
Labels: Clothes bank of Satpuda Foundation/NCSA, distribution of clothes to tribals in tiger reserves, programmes and initiatives

Mobile Health Unit schedule for May and June 2009

This is the schedule for the free medical camps to be conducted in May and the first half of June. Those interested in volunteering, please email ncsa.india@gmail.com