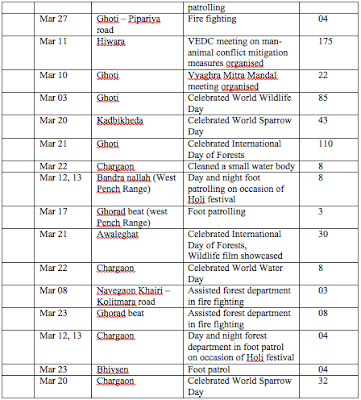 On March 28, Dilip Lanjewar organised a voluntary work programme programme to prepare a water hole for wildlife in a nallah near Khapa village. Dilip Lanjewar along with forest guard Mr. Sheikh and 6 villagers of Khapa selected a site for the water hole, around half a kilometer from the village. The site was selected in such a way that the wild animals will not venture near the village in search of drinking water during the dry summer season. A forest protection hut is also located nearby which will allow regular monitoring of the water hole. The Village Eco-development Committee (VEEDC) members have also decided to monitor the water hole regularly to make sure that nobody poisons the water hole and the water stays safe to drink for the wildlife.

A similar water hole was prepared by Mandar and Dilip along with 2 youths from Pipariya village in the premises of Satpuda Foundation’s Community Center in Pipariya. This water hole will be used by birds and small animals like hare, fox, jungle cat etc which are a frequent visitors at the center.

On March 22, Balkrishna Bagmare, Community Officer for Satpuda Foundation, organised a voluntary work programme programme to clean a water body near Chargaon village. A lot of organic litter had accumulated in the water body leaving the water unsafe for the wildlife that frequents it. During the summer time, if the water sources are not maintained, the wild animals tend to venture close to human habitation and this can lead to man-animal conflict. In order to avoid this, the water body was cleaned. President of the Village Eco-development Committee, Chargaon, Mr. Mohan Sonbarse, Forest Guard Mr. Raut and 6 other villagers participated in the voluntary work programme.

On March 23, Bandu Uikey got information that a fire had been spotted near the Maharashtra and Madhya Pradesh border in the Ghorad beat. Bandu immediately informed the Forest Department staff in Ghatpendari village about the fire. Bandu, along with 8 people including villagers and Forest Department staff, reached the spot and ensured that the fire was completely put out.

In another such incident Mandar and Dilip Lanjewar assisted in putting out fire in the forest adjoining Pipariya-Ghoti road. They also informed Forest Guard Mr. Satish Raut regarding the incident. Mr. Raut later visited the spot for investigation.

During March, villagers in the Pauni buffer area of East range of Pench Tiger Reserve had spotted a tiger which had ventured close to villages on numerous occasions. The tiger had also killed cattle, which created a sense of fear amongst the villagers.

During such migrations, it has been observed that tigers sometimes tend to venture close to human settlements. This can lead to conflict. Hence, proper mitigation measures need to be taken by open discussions and awareness campaigns in the villages in the corridors. In order to avoid any hate crime or poaching of the migrating tigers, the villagers need to be taken into confidence and involved proactively in the efforts to protect the tigers.

In order to achieve this, Satpuda Foundation organised a meeting of the villagers and the Forest Department staff in Hiwara (Salai) village in the Pauni buffer range of Pench Tiger Reserve on March 11. Assistant Conservator of Forests Mrs. Geeta Nannaware, Range Forest Officer Mr. Pakhale were present during the meeting along with other forest guards.

During the meeting, the VEDC members of the village were also present. Mandar spoke to the gathering of villagers regarding the precautionary measures that can be taken by the villagers in order to avoid any conflict.

A similar meeting was organised earlier on March 10 in Ghoti village during which 22 members of Vyaghra Mitra Mandal, Ghoti were present. During the meeting, Mandar and Dilip discussed conflict mitigation measures with them and decided to patrol the area on the village and forest boundary more regularly.

On March 11, Mandar and Dilip Lanjewar assisted Forest Department and Vyaghra Mitra Mandal members to patrol areas on the boundary of Ghoti village and the forest as decided earlier during the meeting in the village on March 11. The team patrolled during the night and watched for signs of presence of tiger near the village.

Similar patrols were organised on March 12, 13 during which members of the Vyaghra Mitra Mandal actively participated.

On March 12, Balkrishna organised a community foot patrol near Chargaon village. He led a team of 4 villagers along with Forest Guard Mr. Raut in the patrol to check poaching during the Holi season. The team patrolled the forest near Chargaon and Suwardhara both during day and night.

Dilip Lanjewar organised a foot patrol on March 28 along with 5 villagers of Khapa.
No illegal activities were observed or reported during these patrols.

On March 20, Dilip Lanjewar celebrated World Sparrow Day along with 43 students of Zilla Parishad Upper Primary school, Kadbikheda while Balkrishna Bagmare celebrated the day along with 32 students of Zilla Parishad Primary school of Chargaon village. During the celebrations, Dilip and Balkrishna made the students aware of rapidly changing climate affecting existence of numerous species. Rise in pollution, habitat destruction, human disturbance, use of chemical pesticides in farming etc are causing most common species like sparrows to go extinct rapidly. Birds being most sensitive to any minor change in environment are one of the best indicators of any ecosystem.

Steep decline in sparrow population both in wild or urban areas, is definitely an indication of deterioration of ecosystems and a reason of concern for us all. In order to make the students understand this and make conscious efforts to improve the environment, Dilip and Balkrishna organised interactive classroom lectures for the student.

On March 21, Satpuda Foundation staff celebrated International Day of Forests 2017 and spread the message for this year i.e. ‘Forests and Energy’ to students of various schools of buffer area of Pench Tiger Reserve in Maharashtra. Bandu Uikey and Balkrishna Bagmare organised a film show for the students of Zilla Parishad Upper Primary school in Awaleghat village.

During the celebration, the students were showcased a film ‘Queen of Trees’. After the film show, Bandu and Balkrishna interacted with the students and discussed how forests and human lives are related closely and we need to ensure that the forests are protected for the generations to come.

Mandar and Dilip also celebrated the day in Zilla Parishad Upper School in Ghoti village. 85 students were present along with members of VEDC and 3 Forest Department staff.

During the month of March 2017, Satpuda Foundation’s staff addressed 365 students during 12 classroom lectures. The staff made students aware of various environmental issues through interactive sessions. During this month’s classroom lectures, the staff emphasized on the reasons and ill effects of forest fires caused by human activities. They also made the students aware of the ways in which they can help prevent forest fires by spreading the message to the village elders.

Details of the classroom programs are as follows: 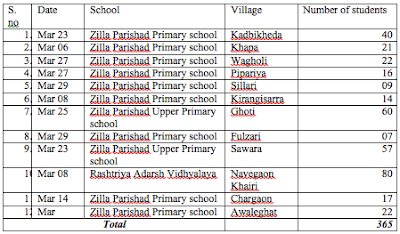 On March 15, Satpuda Foundation along with staff from Pench Tiger Conservation Foundation and Deolapar Police Station organised a meeting for 39 candidates applying for recruitment to the Maharashtra State Police Department.

During the meeting, Mr. Atul Deokar agreed to invite instructors from Pratibha Institute, Nagpur, for training the candidates for the written exam. Later on March 19, a free one-day coaching session was arranged for the candidates.

The written exam is scheduled to be held in April 2017.

During the month of March, Forest Department of Maharashtra state employed youths from villages of buffer area of Pench Tiger Reserve as ‘forest fire watchers’ for the next 3 months. These fire watchers are required to watch out for and inform the officers about any forest fire during the summer season and also assist them in controlling the fires. Satpuda Foundation assisted one villager in gaining employment as fire watcher with the Forest Department.

In addition, we assisted one villager in getting a job as an electrician.

There were no film shows in March due to annual exams in schools.

Posted by Rajashree Khalap at 3:39 AM No comments: