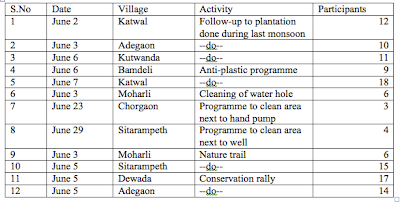 During June, Bandu organized 3 programmes to follow-up on plantation done during the monsoon months. Last year, during the monsoon, we had arranged for planting of saplings in different villages. Now, we are following up to ensure that the saplings get enough water as well as protection from grazing livestock. Details are given in the table above.

On June 23, Bandu organized a programme to clean the area around a hand pump at Chorgaon. Spillover water from the hand pump had stagnated around the pump. 2 students from the village school and one youth joined hands with Bandu in the programme. The team dug a canal to drain the spillover water away and cleaned the area of organic waste and litter which had accumulated there. A similar programme was organized on June 29 at Sitarampeth to clean the area around a well. 2 students from the village school and 2 youths teamed up with Bandu for this programme.

On June 3, Bandu organized a programme to clean a water body in the jungle around 1.5 km from Moharli. The bodies had become clogged with organic waste and scum. Four youths from Moharli joined hands with Bandu in the programme to clean the waterhole to enable wildlife to have access to the water. Wild boar and barking deer are sighted regularly in the area while leopard pugmarks are also seen.

There were no classroom programmes in June as schools were shut for the summer holiday.

During June, Bandu organized 2 nature trails for school students of Moharli (June 3) and Sitarampeth (June 5). On the trails, Bandu helped the children identify various birds and plants and spoke to them about nature and wildlife conservation.

On the occasion of World Environment Day (June 5), Bandu organized 2 conservation rallies at Dewada and Adegaon. Students went through their villages, chanting slogans about conservation of nature and wildlife.

There were health camps in 6 villages in June.

Posted by Rajashree Khalap at 4:15 AM No comments: