These were the five winners from Mofilm's video contest for the International Film Festival of India, Goa, 2010. We were one of the participating brands.

Our brief for the contest was to show the connection between tigers and our water supply. "Save tigers = save forests = save water" is our theme in all our communication. Have a look at how each contestant interpreted the message.

We can't thank Mofilm enough for featuring us in their "Causes" category. We could never had had such a platform without their support. And of course a big thank you to the talented contestants!


Below: Let it roar. Let it rain.
Created by: Mauricio Thomsen


Below: Save Tigers
Created by: Raja Naveen Srungavarapu


Below: The Jungle Guardian
Created by: Ligia Cortes

Posted by Rajashree Khalap at 4:27 AM No comments:

Email ThisBlogThis!Share to TwitterShare to FacebookShare to Pinterest
Labels: films made for Satpuda Foundation 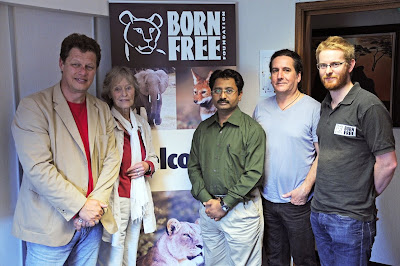 In the picture above: Will Travers, Virginia McKenna, SF founder/President Kishor Rithe, Dr Claudio Sillero and Chris Wright, after a lecture Kishor gave at the Born Free Foundation in Horsham, UK.

The Foundation was started by Ms McKenna and her husband Bill Travers, famous as the actor- couple who played Joy and George Adamson in the classic movie Born Free. This is the Foundation website.

Kishor writes from the UK:

"Today I was invited to give a lecture at Born Free Foundation at Horsham (UK). I was specially thrilled to see and meet a famous actress Virginia McKenna among the audience. She attended my lecture and applauded the work of Satpuda Foundation! While speaking to her after the lecture, I found her a great person...

"For her services to wildlife and to the arts, in 2004 Virginia was made an officer of the Order of the British Empire...I am proud that Satpuda Foundation is associated with Born Free Foundation, the organization that Virginia founded.

"She promised to extend every support for our conservation battle in the Satpuda! She was highly impressed by our work and has asked me to convey her best wishes to all our field staff, office bearers and trustees of Satpuda Foundation."

Posted by Rajashree Khalap at 7:42 AM No comments:

Email ThisBlogThis!Share to TwitterShare to FacebookShare to Pinterest
Labels: Events

Link to the story in Times of India (Nagpur)

NAGPUR: In a move that could go a long way in ensure buffer area management gives priority to tiger conservation, the state government is finally considering giving unified control of the core and buffer areas to the field director of Tadoba-Andhari Tiger Reserve (TATR).

The issue will come up for discussion with forest minister Patangrao Kadam during his visit to Nagpur on September 16. Some MLAs from Chandrapur district, who are opposing the move, allegedly to favour timber and mining lobby, have also been invited to the meeting to clear confusion.

Praveen Pardeshi, principal secretary (forests), confirmed the development. "Unified control of core and buffer areas with the field director of tiger reserve has been recommended by NTCA and practised in other tiger reserves. The same approach seems suitable for orienting buffer area management. Rights of people in buffer will not be harmed," Pardeshi said.

"This is a usual reorganization for forest and wildlife management purpose. Britishers have gone from the country in 1947. We've shifted from timber extraction era to conservation field. Indian Wildlife And Forest Acts have been changed and given complete focus on conservation especially from 2002," Rithe said.

"Now, Maharashtra cannot lag behind. A few politicians who are against this idea will have to think about future of Chandrapur district," Rithe, member of National Board for Wild Life (NBWL), added.

It has been recommended that these compartments may be attached with Chandrapur division and entire buffer of Chandrapur may be constituted into a buffer division attached to the tiger reserve.

Posted by Rajashree Khalap at 7:36 AM No comments:

Locally known as Maldhok or Hom, this endangered bird is tracked in Warora-Bhadrawati area every year in August to ascertain their numbers. Census of GIB, a Schedule-I avian, over the last few years revealed the presence of seven birds of the species. The efforts by the forest department and local farmers helped the survival of a hatchling last year, raising the population in the habitat to eight.

Apart from Solapur, Warora-Bhadrawati is only other rich habitat in the state where GIB is found in good numbers. "Last year, we traced three GIB eggs in the fields with help from farmers. However, only one of the three eggs survived the hatching period of 40 days. All around protection to the hatchling, with help from farmers helped its survival," said DCF, Chandrapur forest division, P Kalyankumar.

He said that hundreds of farmers were felicitated by the guardian minister last year for this. Farmer Waman Kite from village Wanoja, on whose farm the egg had successfully hatched, was given a special prize for his efforts.

According to the census, there were two males and two females of the species in the fields in Warora-Ashti-Tulana block, while a female and two males are seen in Nandori-Bhatali and Pawnal block. "Thanks to the successful hatching last year, one more bird has been added. The young one was seen with its parents in the fields this year. Our men are keeping a close watch on all these birds for protection," he said.

He said birdwatcher Gopal Thosar pointed out the GIB to forest officials in 2004. Since then regular census is being carried out every year. Since last year, foresters also carry out extensive awareness campaigns in villages near GIBs habitats. "People are educated about the importance of survival of the endangered species and GIB safety committees are being formed. Farmers have been asked to report the presence of GIBs and its eggs in their fields on phone numbers of forest officials. We have declared protection allowance of Rs 200 per day for any farmer protecting the GIB eggs in their fields. Any farmer protecting an egg through its incubation period (till hatching) could earn Rs 8,000," Kalyankumar said.

He said the exercise started in July and would continue till December. The birds usually lay their eggs in September-October. Foresters are trying to track every egg laid by GIBs this year. Once tracked, all eggs would be extensively protected till hatching. "Nanaj GIB sanctuary has 15 GIBs. If we could help a few more eggs survive, soon this area could overtake Nanaj sanctuary in the GIB count," Kalyankumar said.

Posted by Rajashree Khalap at 5:07 AM No comments:

Tigers stage comeback in Jalgaon after a long gap

Link to this story.

NAGPUR: It should sound a good news for wildlife lovers. Tigers have staged a comeback in Jalgaon district in Dhule territorial circle after a long gap.

However, Khandesh Nature Conservation Society (KNCS), working for tiger conservation in Jalgaon forest division, claims tigers were very much there but there was no serious monitoring by the department.

Wadoda range forest officer (RFO) DR Patil has been monitoring a tigress with a cub for the past three months. Patil also claims presence of a male tiger in his range. The tigers have made densely forested Purna backwaters their home.

"This is after 2001 that tigers have staged a comeback in Jalgaon division. In 2001, there was tigress with three cubs," Patil said. It seems tigers move from Melghat-Ambabarwa-Yawal-Western Ghats.

However, Abhay Ujagare and Vinod Patil of KNCS say presence of tigers is there in Jalgaon district since 1993 but due to lack of serious monitoring their existence could not be ascertained.

"In past few years the newly added Wan and Ambabarwa to Melghat tiger reserve has improved protection and management. Several evidences of breeding tigresses have been recorded in camera traps from this cluster," said Kishor Rithe, member of National Board for Wild Life (NBWL).

If you peep into history, tigers and lions used to live together in Gujarat. Tigers disappeared from Gujarat in the 1980s whereas lions could manage to survive. The last tiger seen in Gujarat is reported from Dang district bordering Maharashtra. Satpuda mountain is spread up to Dang district where it meets Western Ghats and Aravali mountain.

The tiger habitat continuity link is considered from Kanha-Pench (Maharashtra and Madhya Pradesh)-Satpuda-Melghat and Yawal. Local bird watcher Anil Mahajan from Varangaon (Jalgaon) had recorded a dead cub last year. This is a proof that tigers are breeding in Jalgaon district and earlier claims made by KNCS were also true.

Conservationists were dreaming in last 20 years that tigers would again disperse towards west to Melghat. The state expert committee to declare critical tiger habitats (CTH) ex-PCCF B Majumdar, ex-APCCF Nandkishore and Kishor Rithe had recommended a compact cluster of Wan, Ambabarwa and Narnala sanctuaries adjoining Melghat to be included in MTR, which was accepted by the state and the National Tiger Conservation Authority (NTCA).

Now it is high time this corridor is restored degraded forest towards west of Melghat to bring back tigers in Jalgaon and Dhule districts.

Posted by Rajashree Khalap at 3:34 AM No comments:

Good news in the bad news. The dead cub is a tragic sight, but it is also proof that conditions in Western Satpuda were suitable for its mother to breed. 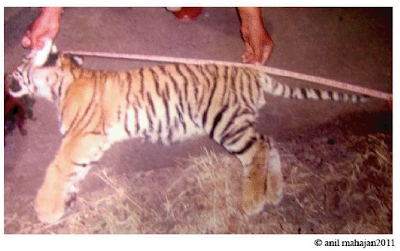 Tigers and lions used to live together in the state of Gujarat, India. However tigers disappeared from this state in 1980s whereas lions could manage to survive. The last tiger seen in Gujarat is reported from Dang district bordering Maharashtra!

The Satpuda mountain range is spread up to Dang district of Gujarat where it meets Western Ghats and Arawali mountain! The tiger habitat continuity link is considered from Kanha-Pench (Maharashtra and Madhya Pradesh)- Satpuda- Melghat and Yawal. Yawal was the western most protected area in Satpuda mountain where tigers were reported till 2002. However in the last few years, there were some claims made by Khandesh Nature Conservation Society of Jalagaon about tiger sightings in and around Yawal and towards west of Jalagaon district in Muktainagar. The Forest department was investigating these claims.

However a local birdwatcher Mr. Anil Mahajan (Varangaon, Dist: Jalgaon) has sent a picture of a dead tiger cub (above0 to Satpuda Foundation which is a substantial proof that tigers are breeding in Jalagaon district and earlier claims made by Khandesh Nature Conservation Society of Jalagaon were also valid! If it is so, it's a remarkable piece of news for the tigers in central India.

Tiger conservationists were dreaming for the last 20 years that tigers would again disperse towards the west to Melghat. The state expert committee for declaring Critical Tiger Habitats (CTH) Mr. B. Majumdar, Dr. Nandkishore and Kishor Rithe had recommended a compact cluster of Wan, Ambabarawa and Narnala sanctuaries adjoining Melghat Tiger Reserve (MTR) should be included in to MTR- CTH which was accepted by the state and the National Tiger Conservation Authority (NTCA). The committee had discussed the future possibility of restoration of degraded corridors towards the west of Melghat to bring back the tiger population in Jalagaon and Dhule district (further west to Yawal).

"In past few years the newly added Wan, Ambabarawa and Wan cluster (to MTR-CTH) has improved a lot in protection and management. Several evidences of breeding tigresses have been recorded in camera traps from this cluster of protected areas," said Kishor Rithe, member of the National Board for Wildlife.

The unconfirmed tiger sighting reports in the past two years by villagers and local nature lovers in Jalgaon district shows that the tigers are dispersing towards the west in Jalagaon district. The forest range Kurha (Vadoda) includes Kurha, Charthana and Dolarkheda rounds. The area of three beats North Dolarkheda (2100ha), South Dolarkheda (1500ha) and Sukali beat (1450 ha) of Dolarkheda round in Kurha range is a good potential area for tigers having 10 perennial waterholes.

Satpuda Foundation has requested the Government of Maharashtra to provide necessary management to this area urgently.

Posted by Rajashree Khalap at 3:03 AM 2 comments: