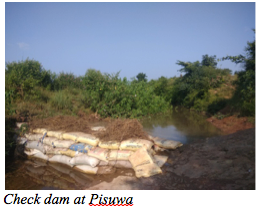 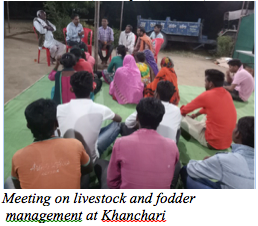 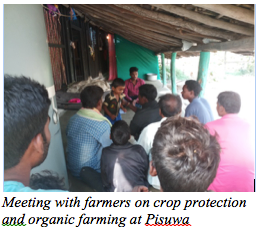 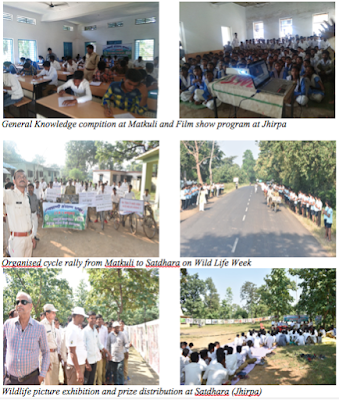 On October 13, we organised a program to build a check dam on a stream near Matkuli village. A team comprising 17 students from Government Higher Secondary School, Matkuli and our field assistants Hameed and Aabid built the dam. The resultant water body will benefit wildlife at night. Spotted deer, monkeys and leopards are seen in the area.

On October 21, we organised a program to dig a soak pit at the Government Higher Secondary School, Matkuli. 10 children joined hands with Hamid in digging the pit, which will take spillover water from a hand pump on the school premises. The pit will help to recharge the water table around the hand pump.
A similar program was organised at Chandanpipariya on October 21.

During the month we participated in forest patrolling work with Forest Department at Pisuwa, Jhirpa and Aaditoriya. Mr. Srinarayan Bhalavi, Shivnarayan Devda (Forest Guards), forest choukidars and Eco Development Committee members were the other members of the patrolling team.

During the month, our team organised 25 lectures to educate students about nature and wildlife conservation. 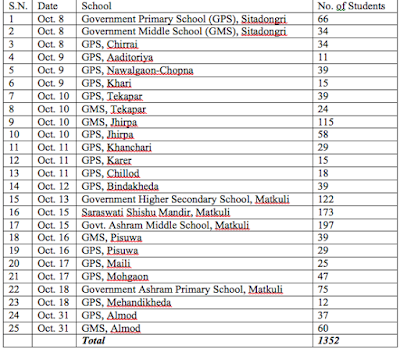 During the month we organised meetings with unemployed villagers to discuss candidate selection for drivers training, tailoring and embroidery, and poultry farming. This program was jointly organised with the National Rural Livelihood Mission (NRLM) and Nehru Yuva Kendra Hoshangabad.

In October, we completed the identification and selection of unemployed villagers in the buffer villages of East Pachmarhi and Denwa buffer and prepared a proposal for livelihood training. STR management will approach the concerned government agencies to implement livelihood training programs under the NRLM. Details of the programs are as follows: 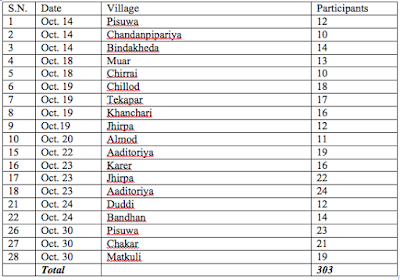 Meeting on livestock and fodder management

During the month we organised 17 meetings with villagers on crop protection, organic farming and horticulture.  Details of the programs are as follows: 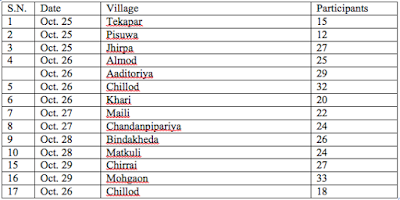 Satpuda Foundation organises medical camps at which villagers get free treatment and medicines. These camps, whose schedule is set in conjunction with the management of the Tiger Reserve, are run by the Mobile Health Service (MHS) of Satpuda Foundation.

There were health camps in 6 villages in October.

During the month, our team visited the relocated villages of Kukra, Birjikhapa, Nankot, Sonpur, Anjandhana, Mongra, Manakachar, Fiferi and Ghoghri, following up on the status of the relocated villagers. Our team organised meetings on employment and livelihood awareness program on poultry farming, fisheries, tailoring & embroidery, mushroom cultivation. Shirnarayan Dewda (Forest Guard) joined our team of Ashfaq Aarbi, Hamid Khan and Aabid Khan in the program.

During the first week of October, our team organised a series of events across two ranges - East Pachmarhi and Denwa - to celebrate Wildlife Week. 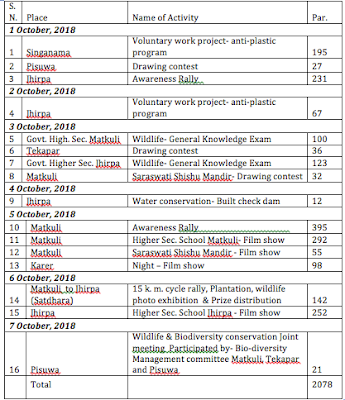 Posted by Rajashree Khalap at 4:04 AM No comments: