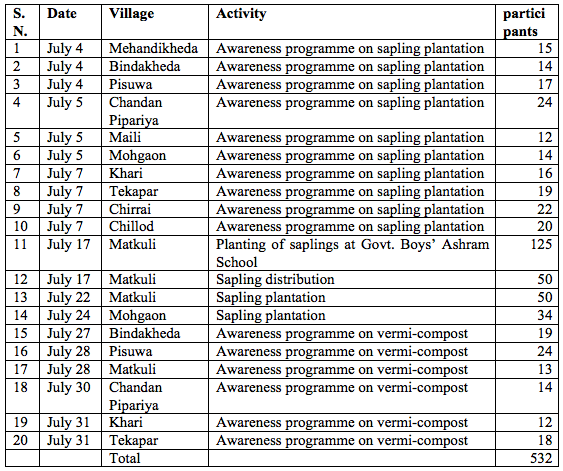 With the monsoon setting in across the landscape, our teams have been working to motivate villagers to plant saplings. In July, our Satpura team organized distribution and planting of saplings in Pachmarhi cluster. The details are given in the table above. The saplings were provided free of cost by the Social Forestry wing. Species distributed and planted included amla, lemon, amrood and kosam. 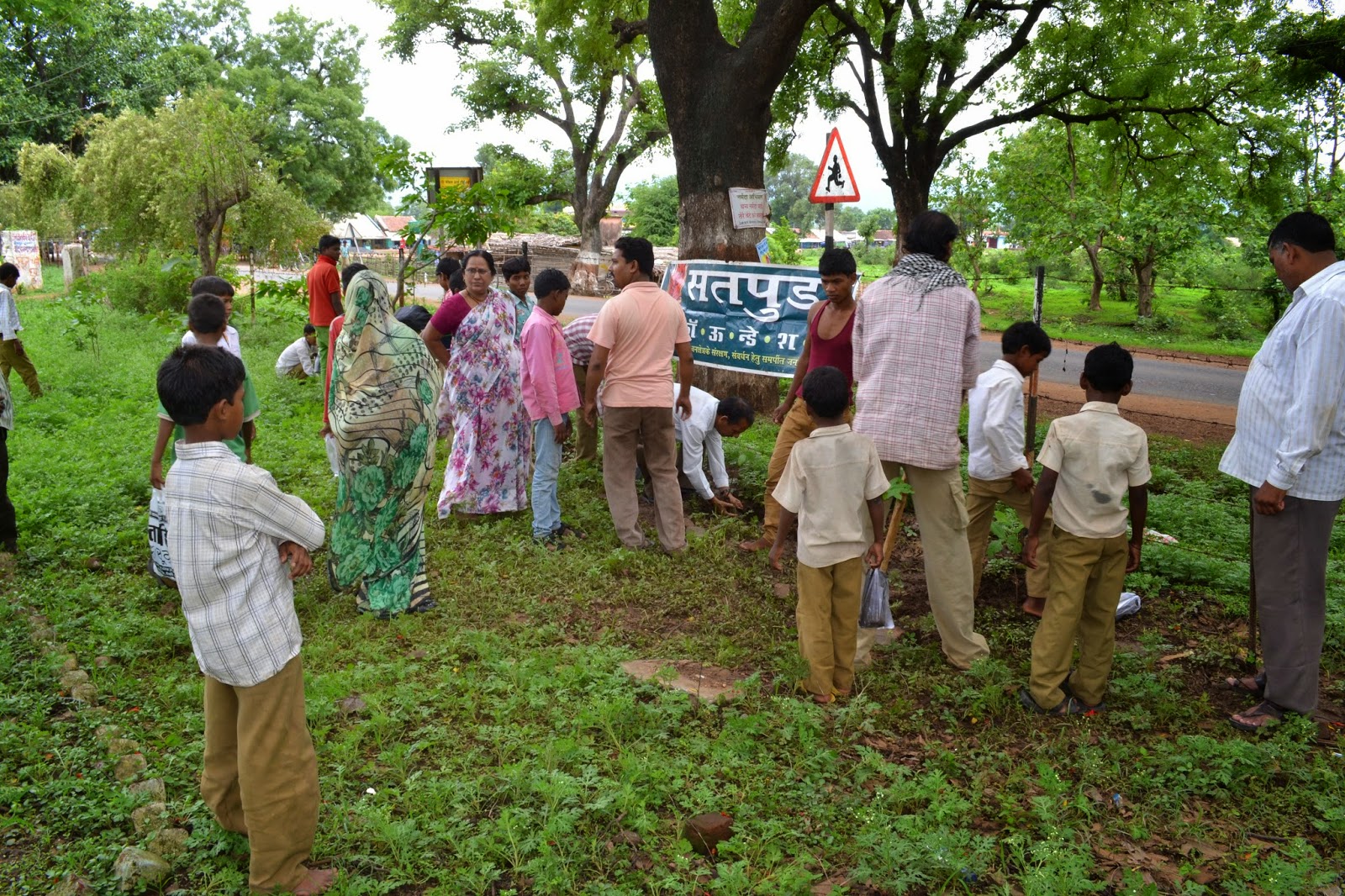 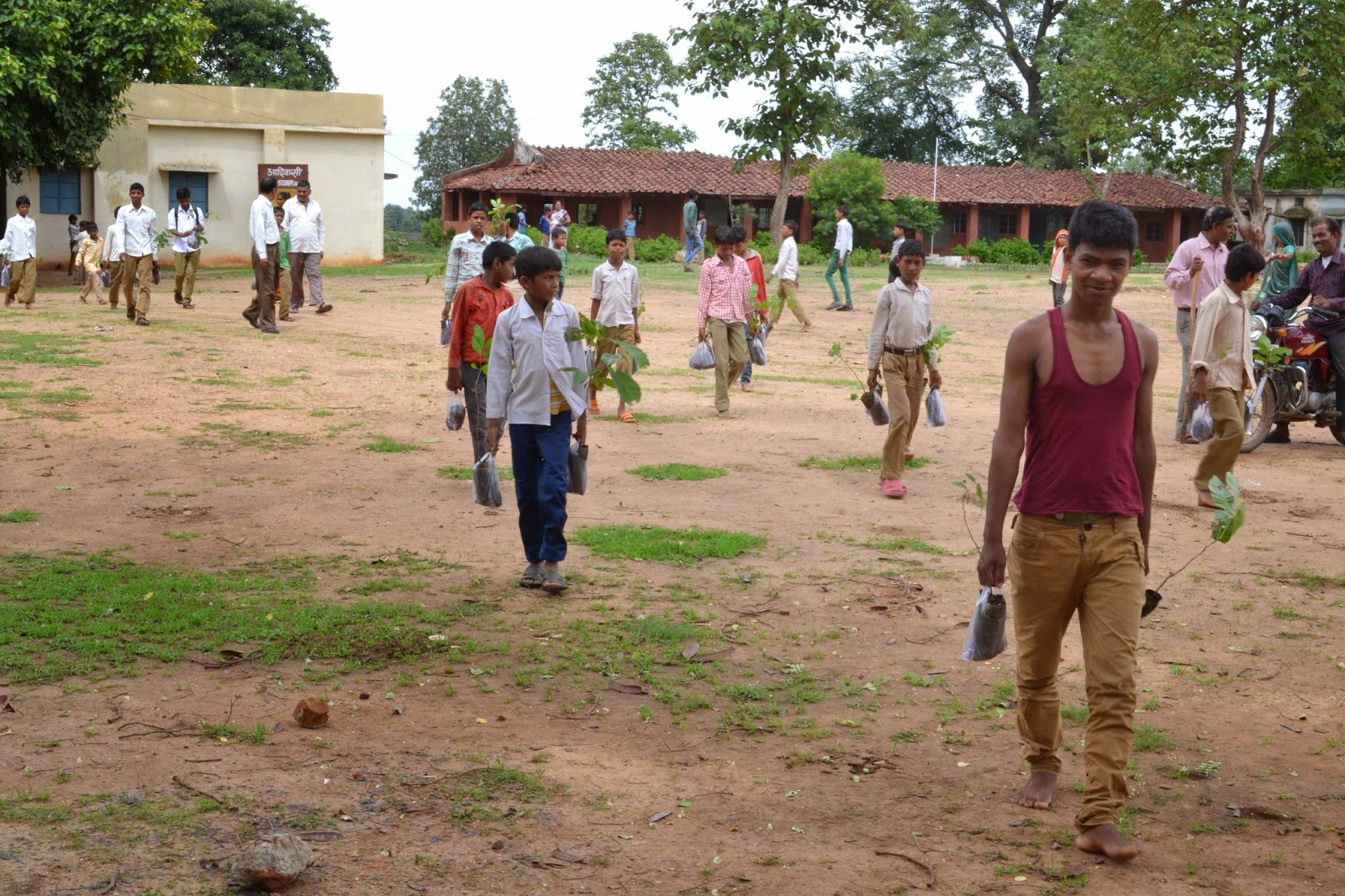 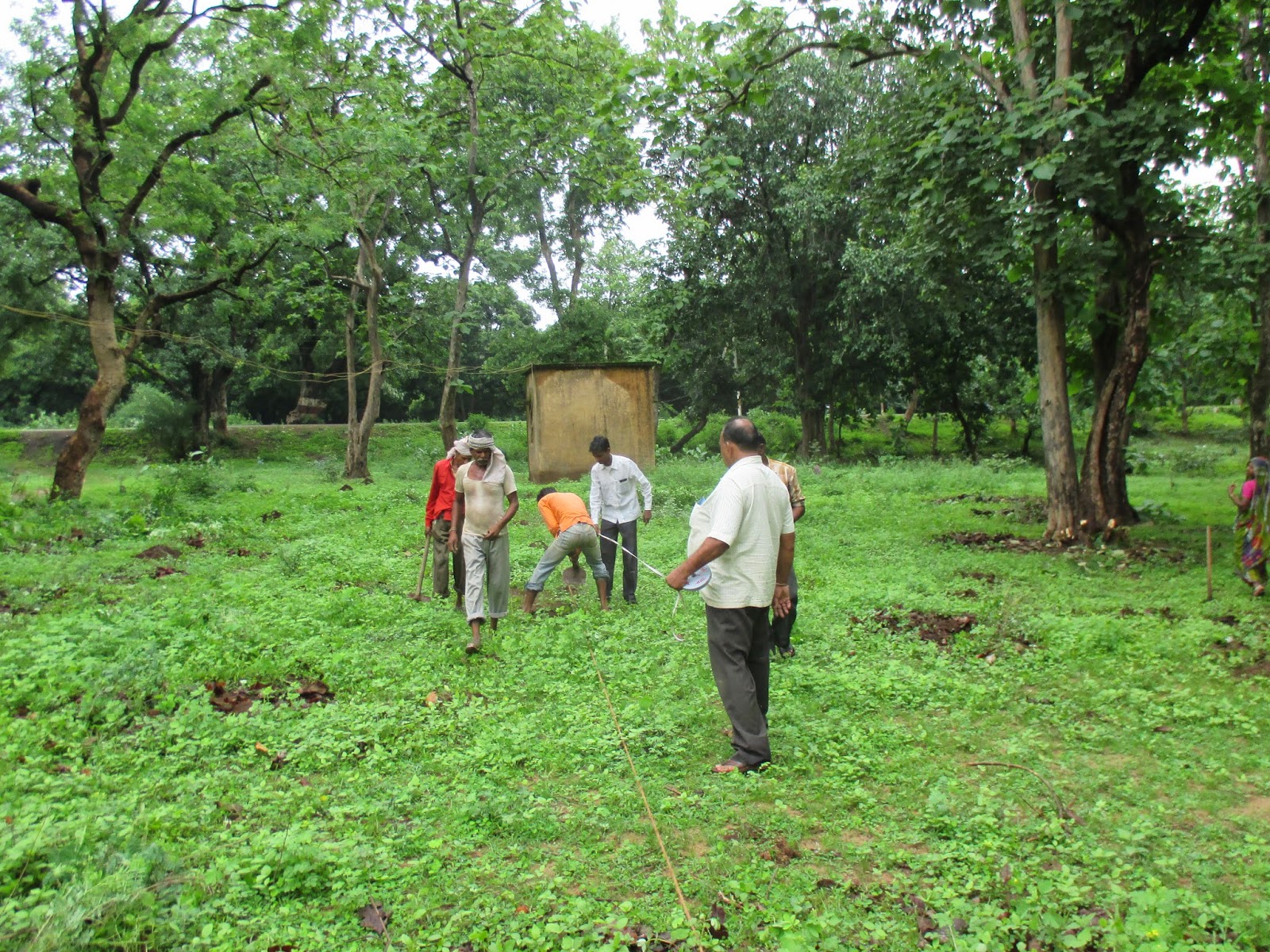 Education
During the month, our team visited 15 schools to educate children about nature and wildlife conservation. 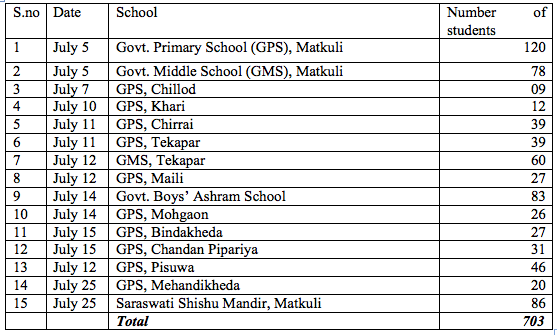 During July, our team conducted a total of 17 film shows on nature and wildlife conservation. 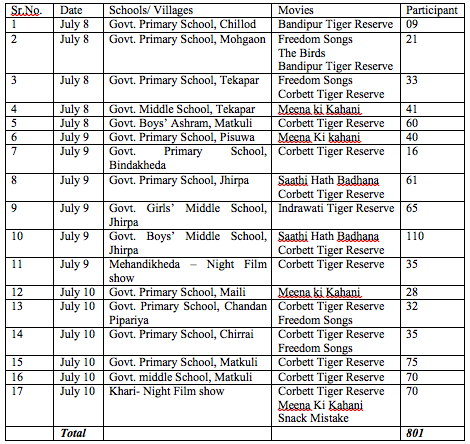 During the month, our team explained the potential for earning additional income by making and selling re-usable bags. Two villagers were identified for this activity and were asked to make samples. They will be assisted with market linkages once they are able to make products of the right quality. Indore-based non-government organization (NGO) Symbiosis will provide technical and financial assistance to this activity. Five youths will be sent to Symbiosis in August for training.  In the coming months, once a team of trained youths is in place, Symbiosis will provide a machine to make the bags.

Two SHGs were identified as suitable for this activity:

On July 15, Hamid Khan assisted Sahitya Academy Madhya Pradesh Sanskriti Parishad, Bhopal in conducting a cultural and educational programme for school, students at Matkuli. Various programmes were organized including an essay-writing programme on local culture and customs, drawing contest and singing of tribal songs. The programme was held at Saraswati Shishu Mandir, Matkuli. Photo below. 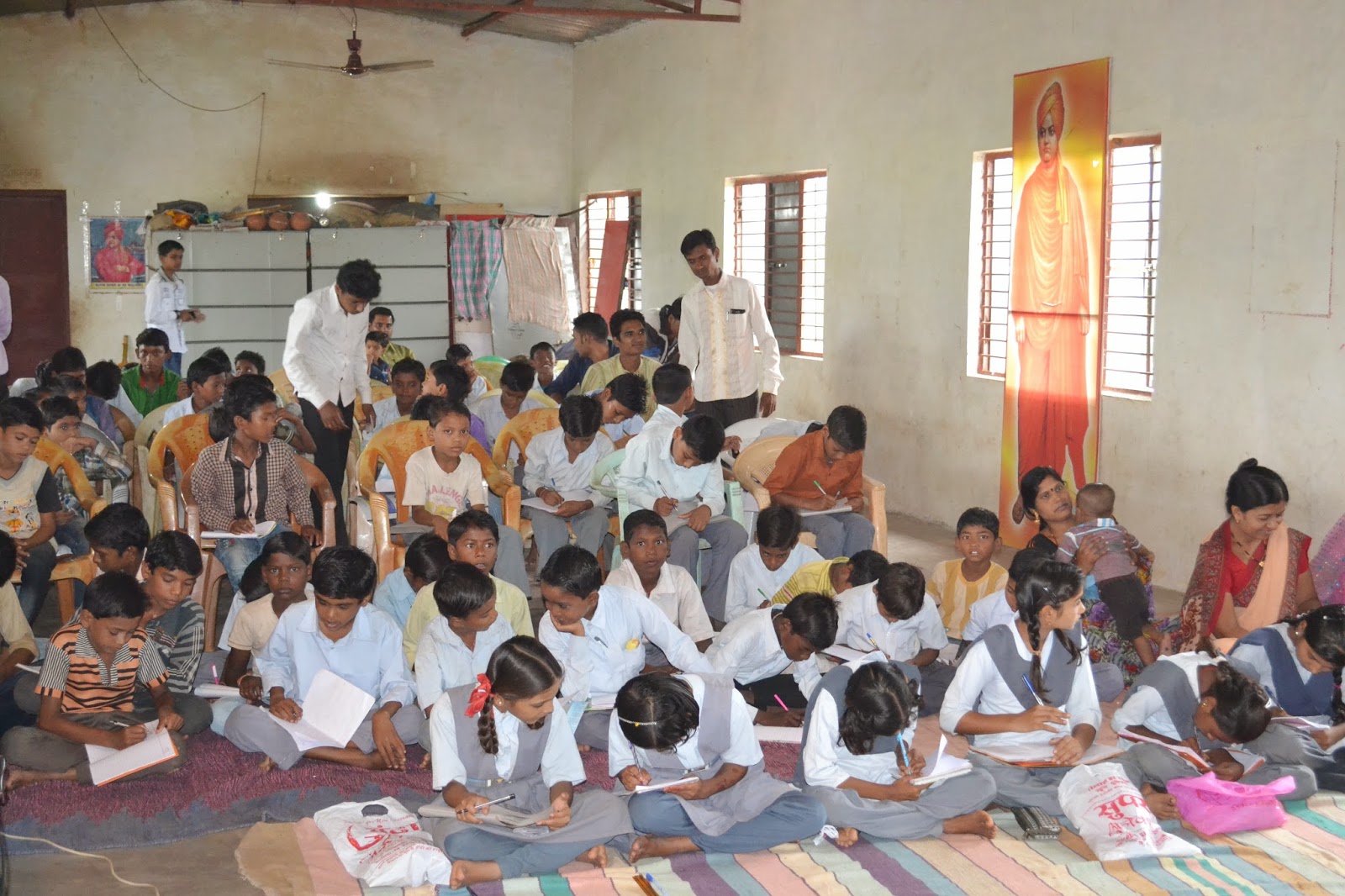 Posted by Rajashree Khalap at 4:18 AM No comments:

·      2 community assistance voluntary work projects – programmes to clean areas around hand pumps at Junona and Dewada
·      3 sapling plantation programmes at Moharli, Chorgaon and Dewada
·      3 programmes at Katwal to collect seeds for future plantation
·      One programme to clean soak pit at Adegaon
·      One conservation rally at Adegaon on Global Tiger Day
·      Classroom visits to 11 schools as part of our environment education programme – attended by 325 students
·      Film shows on nature and wildlife conservation at 9 places – attended by 373 people
·      Health camps in 6 villages – 120 patients treated 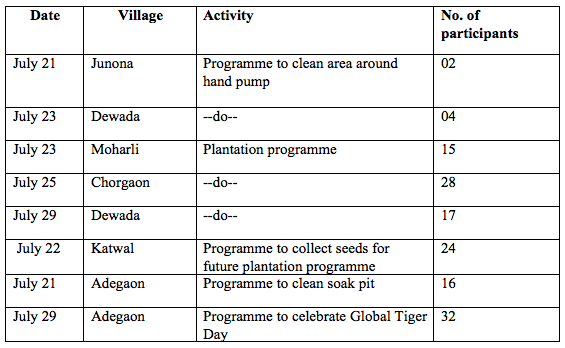 Bandu organized 2 community assistance programmes during the month. On July 21, he organized a programme at Junona to clear the area around a hand pump. Water had spilled over while people drew from the well. This had stagnated, leading to proliferation of mosquitoes and insects. Our team cleared the area, removing scum and organic growth and dug a canal to drain away the water. At Junona, 2 youths from the village joined Bandu in the programme. A similar programme was organized on July 23 at Dewada in which 4 youths joined hands with Bandu.

On July 21, Bandu led a team of 16 school students in cleaning a soak pit on the Adegaon Zilla Parishad Primary School campus. The soak pit was choked with wild growth. Photos below. 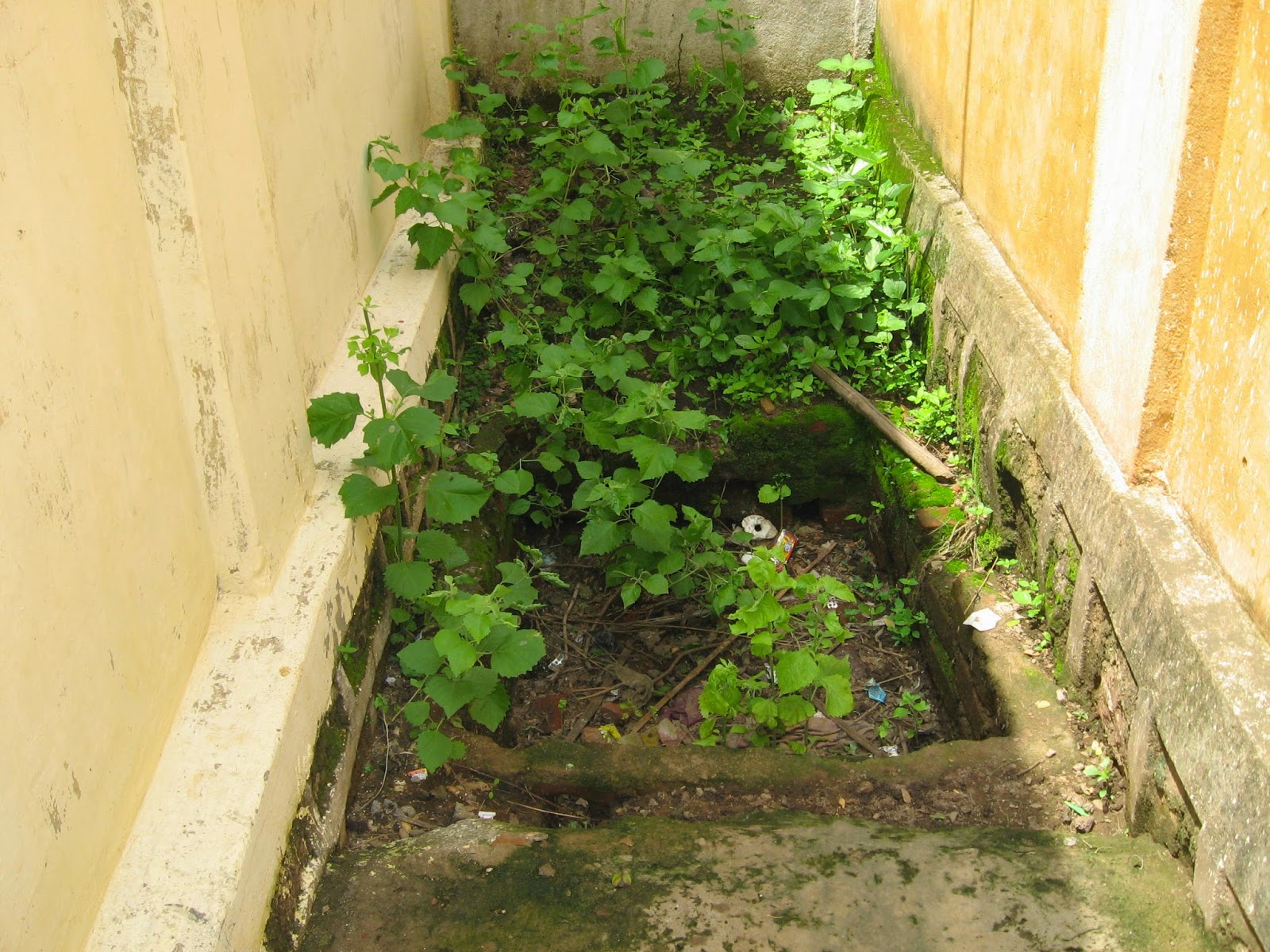 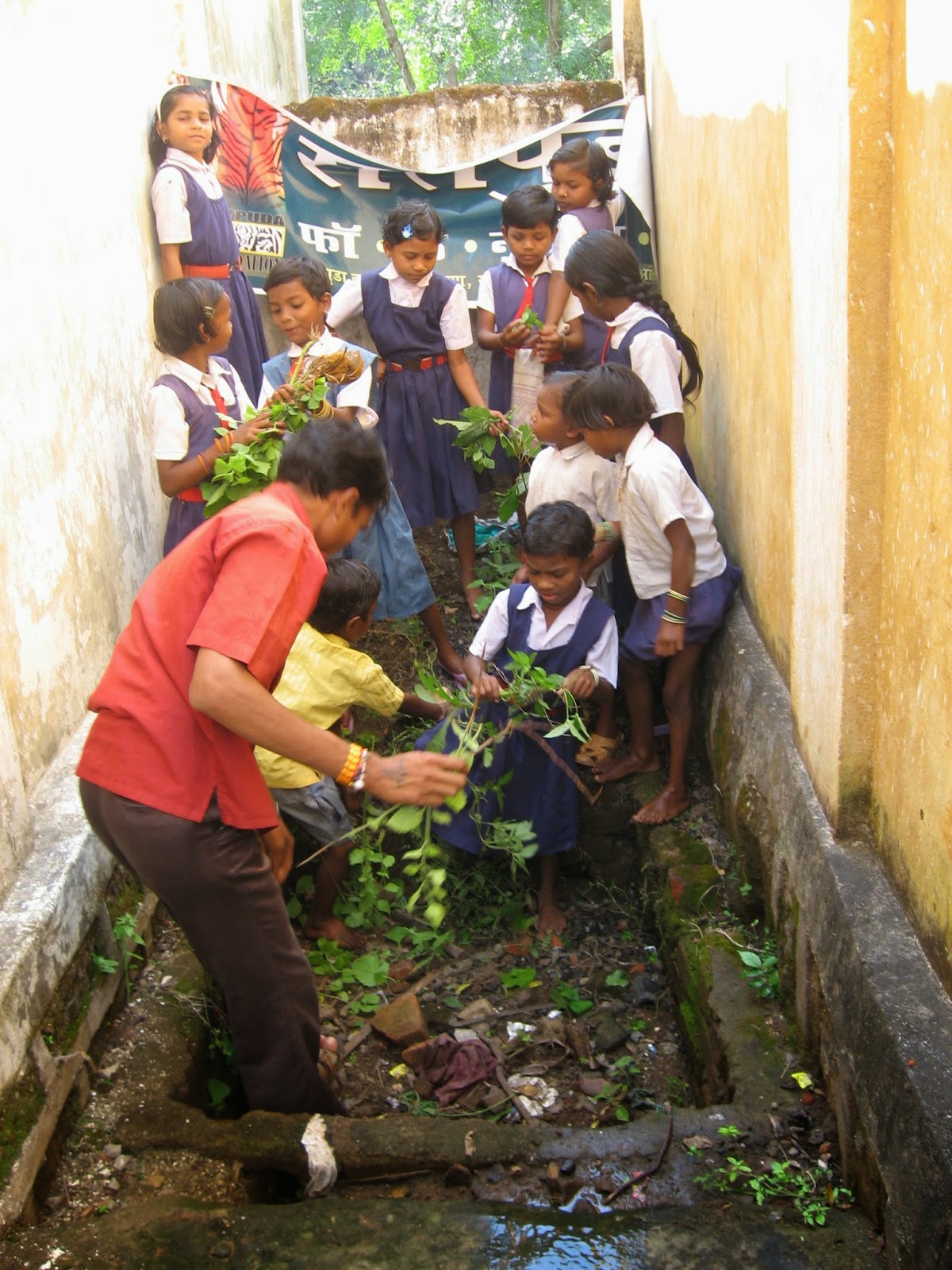 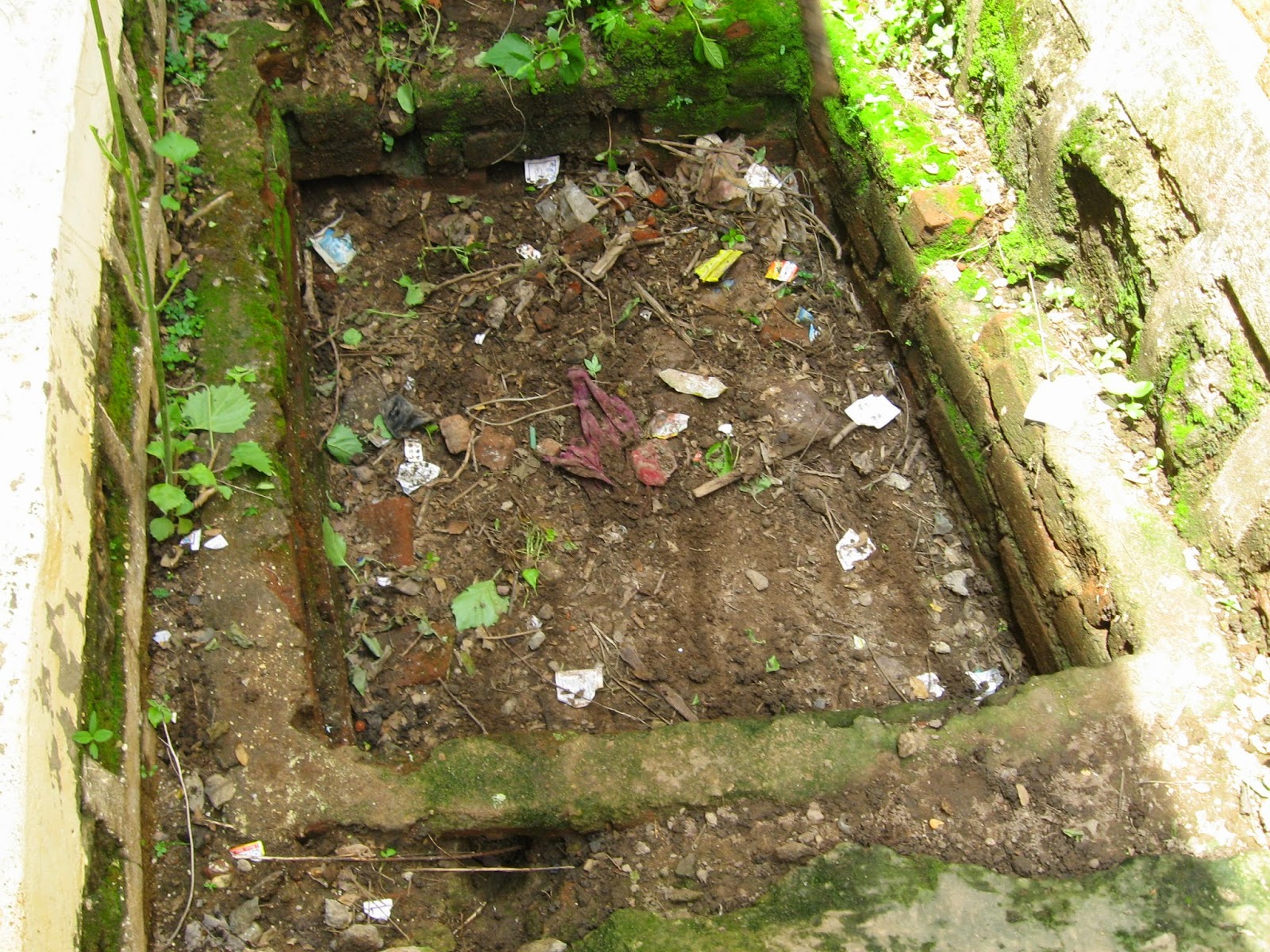 On July 23, Bandu organized a programme at Moharli to plant saplings. 15 youths from the village joined Bandu in the programme. A similar programme was organized on July 25 at Chorgaon in which 28 students participated and at Dewada on July 29 in which 17 students took part. A total of 30 saplings were planted in the three programmes.  The saplings included sitaphal, karanj, neem and mango.

Bandu has been organizing programmes to collect seeds for planting. In the process, children are taught about the value of trees and the need to preserve the green cover and increase it. During July, seeds were collected by children in Katwal.

Bandu visited 11 schools in July to give lectures on nature and wildlife conservation. 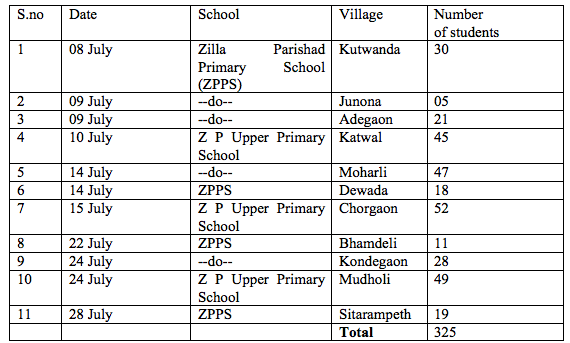 There were 9 film shows on nature and wildlife in July.

There were 6 health camps in July.

Posted by Rajashree Khalap at 6:53 AM No comments: