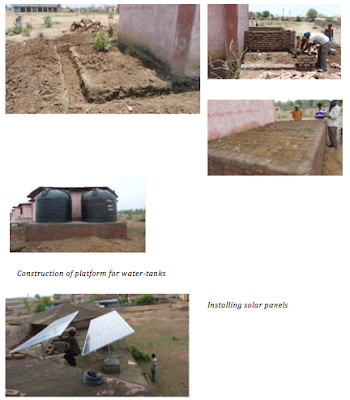 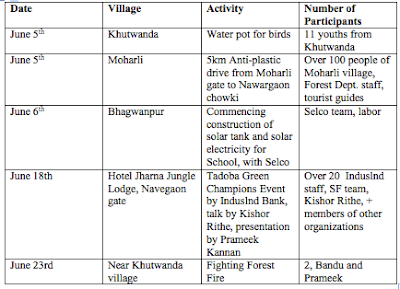 On June 6th, Prameek and Bandu met with a team from Selco, a Bangalore-based company that is collaborating with Satpuda Foundation on a solar-electrification project. The construction of two solar-powered 10,000-liter water tanks for the Bhagwanpur School as well as solar electrification of the school began today. Prameek and Bandu followed up this work on 9th, 10th, 12th, 13th, 14th, 15th, 16th, 17th, 18th, and 29th June.

On June 18th, Prameek and Bandu went to Hotel Jharna Jungle Lodge at Navegaon gate, for the Tadoba Green Champions event organized by Induslnd Bank. Satpuda Foundation’s founder and President Kishor Rithe gave a talk and presentation on Human-Wildlife Conflict at the event. Following this, our Conservation Officer Prameek Kannan gave a presentation on Satpuda Foundation’s work at TATR. This was a great opportunity for networking, as, in addition to Induslnd Bank’s staff, members of other organizations from Mumbai, involved in wildlife and environmental conservation were also present, and Prameek and Bandu got a chance
to meet and interact with them.

On June 23rd, Prameek and Bandu saw a forest fire in a bamboo grove by the side of the road near Khutwanda. The two then proceeded to put out the fire. It was unknown whether the fire was accidental or intentional.

There were no classroom programmes in June as schools were shut for the annual summer holiday.

On June 8th, Prameek and Bandu spoke with unemployed youths of Khutwanda village on the importance of drivers training and the employment opportunities for drivers around Tadoba and further afield.

There were no film shows in June as schools were shut for the annual summer holiday.

Posted by Rajashree Khalap at 6:34 AM No comments: