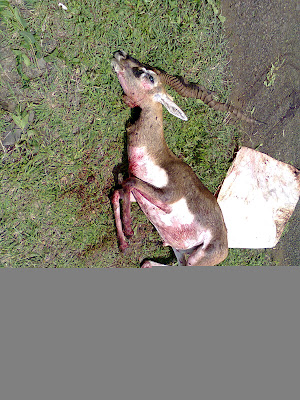 In Maharashtra's Washim district, the poachers entered on 16th July midnight near the agricultural fields between Jambharun and Kajalamba village and poached the blackbuck. Villagers of Jambharun rushed to the area after hearing the bullet fire and nabbed Anil Madhukar Naik, nephew of Minister Mr. Manohar Naik and his friends. Villagers later handed over these poachers along with the dead body of black buck, auto-rickshaw (No.M.H 37/G/3146), red colour Sumo vehicle (without number plate), rifle and net directly to the police squad that reached from Ansingh police station. However police later released the offenders due to heavy political pressure and even the forest department tried to help the offenders.
Knowing the relationship of the accused with NCP Minister Manohar Naik, Forest and police department initially tried to fully co-operate with the accused.
Chronology of events:
17th July 2012: Some local nature lovers took the matter to Satpuda Foundation, an NGO working for wildlife protection in central India, who then pursued the case strongly. It was alleged that the forest department had respected the political orders and only sent Round Officer for spot-panchanama and not even a Range Forest Officer. The Round Officer burnt the dead body of the blackbuck to remove the evidence. Top wildlife officers at Nagpur, forest headquarters of Maharashtra, remained ignorant till 17th July night.
Mr. S. W. H. Naqvi, Chief Wildlife Warden of Maharashtra state had ordered the arrest and investigation on 17th July. However even after a week, the chief conservator of forests (CCF), Yavatmal circle, D.K. Tyagi and his Dy. Conservator of Forest Mr. Moon did not even arrest the poachers.
21st July 2012: Honorary Wildlife Wardens of five districts of Vidarbha , appointed by the Government of Maharashtra, along with many NGO representatives went to Jambharun village to felicitate the brave villagers. They were shocked to see the kind of political pressure this village is facing.The team also found that the witnesses who had actually handed over the offenders to police now clearly declined to say anything. The Sarpanch politely refused to participate in the felicitation.
22nd July 2012: Satpuda Foundation demanded a CBI inquiry assisted by the Wildlife Crime Control bureau. After media pressure, the Forest department handed over the investigation to Assistant conservator of forest (ACF) VG Tehre who started conducting a strict inquiry.
On 24th July 2012: Finally Forest officials arrested one accused Yasin Shah Gulzar of Wara-jahangir, who was involved in disposing of the carcass of the animal on the direction of one Bhimrao Chavan. His bike used to remove evidence was also seized.
Anil Naik and three others, all residents of Gahuli in Pusad, applied for anticipatory bail through their lawyers and denied involvement in poaching.
30th July 2012: However, the Additional District and session court rejected the bail application and had kept the matter for final hearing on July 30. Meanwhile, accused Shah was granted a police custody remand (PCR) till July 30. All the eight accused - four from Gahuli and four from Shengi - were declared absconding.
9th August 2012: Prime accused Anil Naik finally approached the Nagpur bench of Mumbai High Court for bail against the order of District and session Court Washim. HC had granted conditional interim bail till 28th August 2012. HC had aso ordered that the accused should personally remain present before investigation officer Mr.Tehre on 21st and 23rd August and give his submission.
Three Police officers co-accused:
Realising the consequences, now prime accused Anil Naik also tried to pressurize the investigating team of the forest officers by registering the charges of molestation during the investigation through three police officers who are co-accused in this case. An FIR was lodged at Ansingh police station against round officer Babarao Ghatare and four other officials investigating the poaching case on Friday night 24th.
The investigation team of the Forest Department found that the three police officials Pratap singh Chauhan, Ramesh Chauhan and Tulsiram Khandare had aided the accused and hence were made co-accused. The Forest department was trying to nab them but they fled. Finally the team found police constable Ramesh Chauhan on 22nd August. But before the team could record his statement he ran away and took shelter at his aide Khandare's house. The team found it inappropriate to enter the house without a warrant and hence approached the Ansingh police station for help, but they did not co-operate. The same evening the wife of Khandare lodged a complaint of molestation against Round Officer Ghatare and others. The police lodged the FIR promptly on 24th night against the investigation team from the Forest Department.
Satpuda Foundation has demanded action from Home Minister R.R.Patil in this high profile case on co-accused police officers. "Home Minister should suspend the police officers immediately so that forest officers can arrest them in this case", said Kishor Rithe, President of Satpuda Foundation who is also a member of the Maharashtra State Wildlife Board.
24th August 2012: Prime accused finally surrendered the rifle and Tata Sumo to the Investigating officer. The license of rifle was found in the name of accused Anil Madhukar Naik. Shockingly the Tata Sumo vehicle which was purchased in 2008 is yet to be registered with the RTO.
28th August 2012: Today Hon'ble High Court rejected the bail of prime accused Anil Madhukar Naik.
The blackbuck is a Schedule- I animal as per the Wildlife Protection Act 1972 and there is a provision of up to seven years imprisonment for such wildlife crime. Now it would be interesting to see the accused behind bars. However sources in political circles are still expecting relief through NCP leaders.
Satpuda Foundation
Plot No.17, 201 Sapphire Apt,
Puranik Layout, Bharat Nagar, Amravati Road,
Nagpur-440001
E-mail : satpuda@gmail.com
Posted by Rajashree Khalap at 9:22 AM No comments: 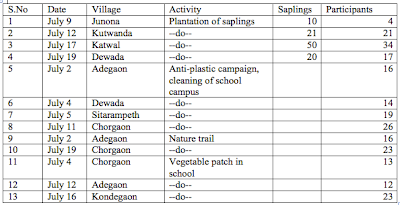 With the onset of the monsoon, our team has been organizing plantation drives in villages across the landscape. In Tadoba, our field assistant Bandu Kumare organized plantation in 4 village schools.

The Forest Department supplied neem saplings free of cost and we distributed them for planting in 4 village schools. Details are given in the table above.

Above: On July 2, Bandu organized an anti-plastic programme at the ZP Primary School at Adegaon in which school students cleaned up the main village road of plastic litter and waste. They then cleaned up the school premises. The litter/waste was then buried in pits. Similar programmes were organized on July 5 at Sitarampeth and on July 11 at Chorgaon.

On July 2, Bandu led 16 students of ZP Primary School, Adegaon on a nature trail in the jungle adjoining the village. Bandu, who earlier worked as a guide in Tadoba-Andhari Tiger Reserve, helped the children identify local flora and fauna and explained the need for nature and wildlife conservation to them.

A similar bird-watching trail was organized on July 19 at Chorgaon for 23 children of the village.

Above: In June, our team joined hands with school teachers to prepare vegetable patches (parsbagh) in school premises. This activity was done to develop interest among students to develop similar parsbagh in their houses, so they can get nutritious vegetables at home. Such vegetables are not usually available in forested regions.

In July, we helped set up three such vegetable patches at ZP Schools of Chorgaon (July 4), Adegaon (July 12) and Kondegaon (July 16).

Education Van
There were 10 film shows on nature and wildlife in July. 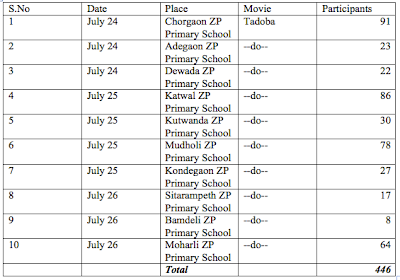 MHU
There were health camps in 6 villages in July.

Yogesh and Bandu visited Bhagwanpur on July 14. Bandu again visited the village on July 18-19 to follow up on the status of the relocated villagers. Below: a meeting with resettled villagers to hear their issues.


Posted by Rajashree Khalap at 4:52 AM No comments:

Highlights
·      Sapling distribution and tree plantation.
·      Classroom visits to 18 schools as part of our environment education programme – attended by 672 students.
·      5 unemployed youths placed in jobs at Matkuli/Jabalpur at starting salary of Rs 3300/- & 3000/- per month. 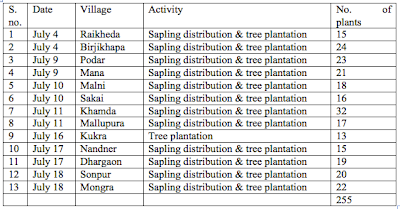 Above: With the monsoon setting in across the landscape, our teams have been working to motivate villagers to plant saplings. In July, our Satpura team organized sapling distribution and planting in both clusters. The details are given in the table above. The saplings were provided free of cost by the Social Forestry wing. Species distributed included mango, kattal, neem, amla, lemon.

Education
During the month, our team made classroom visits to 18 schools to educate children about nature and wildlife conservation. 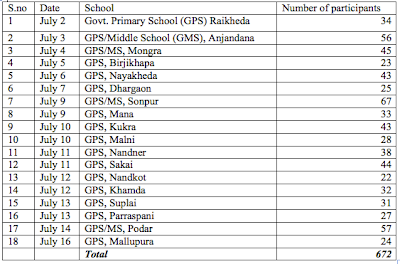 Employment Cell
5 youths from both clusters got jobs in July with our assistance.
Details of the placements are as follows: 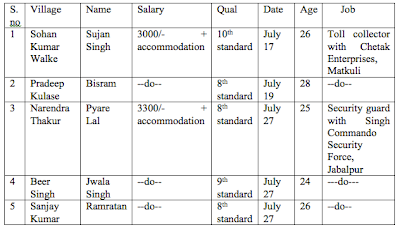 Posted by Rajashree Khalap at 5:06 AM No comments: 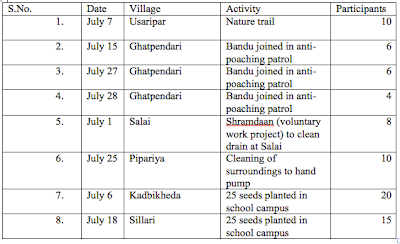 On July 15, 27 and 28 field assistant Bandu Uikey joined local staff of the Forest Department in anti-poaching patrols. Members of the eco-development committee (EDC) of Ghatpendari also took part in the patrols in the jungle near Ghatpendari.

Above: On July 25, field assistant Dilip Lanjewar led a team of 10 unemployed youths and children of Pipariya village in a programme to clean the surroundings next to a hand pump in the village. Leaves, plastic and other organic matter had spread, surrounding the hand pump. The team collected the material and cleaned the area next to the hand pump.

Above: On July 1, Bandu Uikey led a team of 8 unemployed youths of Salai village in a programme to clean a drain in Ghatpendari village. Leaves, plastic and organic matter had fallen into the drain and clogged it up, making it difficult for water to flow. 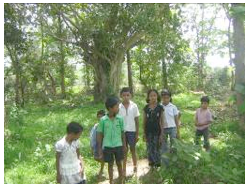 Above: On July 7, Dilip led 10 children from Usaripar village on a nature trail in the jungle adjoining the village. On the trail, Dilip spoke to the children about the importance of trees and wildlife in our eco- system.


Above: On July 6 Dilip led a team of 20 children from Kadbikheda in a programme to plant seeds in the school campus. Seeds were of kaner, neem, jamun and heat. 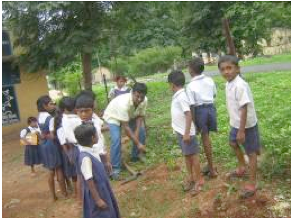 Above: On July 18 Dilip led a team of 15 children from Sillari in a programme to plant seeds in the school campus.

During the month, our team also worked with the Forest Department in preparing micro plans. As part of this exercise, we held awareness programmes jointly with the Department in villages to explain to the villagers about micro-plans, Joint Forest Management and Eco-Development Committees.

The meetings were held at 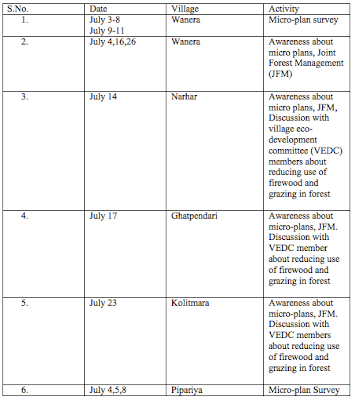 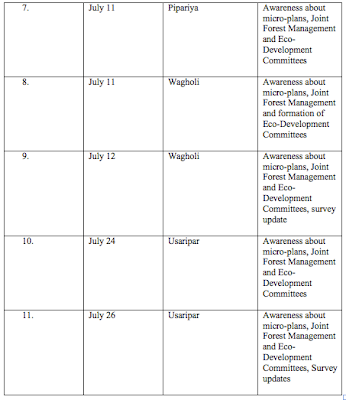 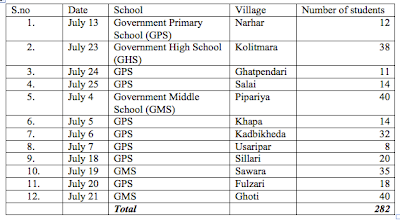 Education van programme:
There were 7 film shows on wildlife and nature conservation in July, covering 287 students.

Mobile Health Unit (MHU)
There were 4 camps in July at which 144 patients were treated.

Posted by Rajashree Khalap at 8:11 AM No comments: