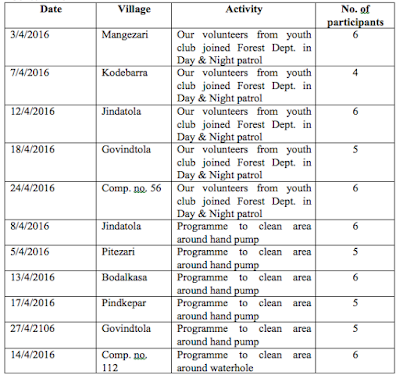 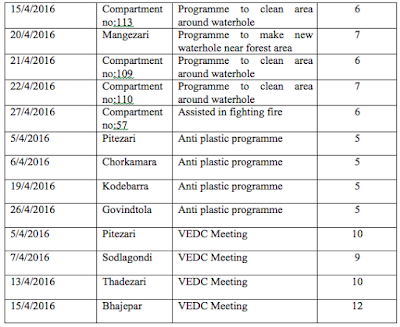 Our team organized 5 community assistance programmes on April 2, 5, 13, 17 and 27 to clear areas around hand pumps at Pongezara, Asalpani, Mangezari and Jindatola respectively. Unemployed youths from Mangezari participated in all programmes which were led by Mukund and Salimkumar.

Besides our staff, volunteers from a youth club at Mangezari also joined in the patrols. The youth club was set up with our assistance and is mentored by Mukund Dhurve.

During the month, our team assisted in fighting a fire in the forest in Compartment no. 57 on April 27.

During the month our team organized 5 anti-plastic programmes to clean polythene/plastic litter from villages. The programmes were organised on April 5,6,19 and 24 at Pitezari, Chorkamara, Kodebarra and Govindtola villages respectively. Mukund, Salimkumar and Jivraj organised the programmes which were attended by villagers and village eco-development committee (VEDC) members. The plastic litter has been kept in our Mangezari office and will be sent to Tiroda for recycling.

The Government of Maharashtra has issued the buffer zone notification for the Navegaon-Nagzira Tiger Reserve. Following this, doubts have sprung up in the minds of villagers as to how they will be affected by the notification. Due to the doubts, some villagers are opposing the notification. To clear these doubts and misgivings, we organised a total of 4 awareness programmes during April in 4 villages – Pitezari, Sodlagondi, Thadezari and Bhajepar.

On the occasion of Earth day, we organized a programme for villagers, self-help group (SHG) members and eco-development committee (EDC) members from Jindatola (Ghoti), Mangezari, Govindtola, Kodebarra, Bodalkasa. The importance of conservation was explained to the gathering and we explained to them how they could use measures like soak pits and stop dams to conserve water. The importance of reducing the usage of plastic was also stressed.

In livelihood options, our team explained to the SHGs the various government schemes available and offered them guidance on food processing, making of pickles, etc…

Our team also gave a demonstration of improved chullah (stove) which use less firewood and emit less smoke.

There were no education programmes during April as students were busy with their annual examinations.

There were no film shows during the month April as students were busy with their annual examinations.

There were 6 health camps in April at which 101 patients received free treatment.

Posted by Rajashree Khalap at 3:21 AM