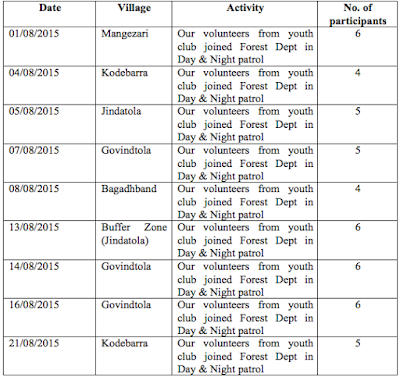 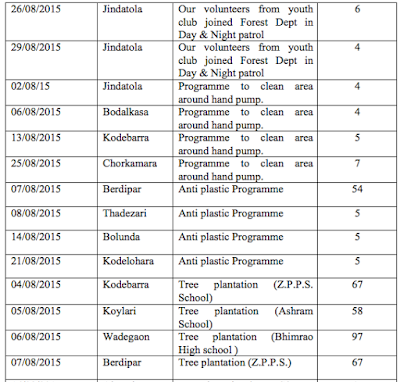 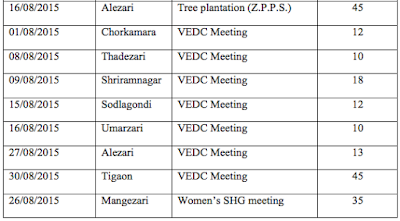 Our team organized 4 community assistance programmes on August 6, 2, 13, 25 to clear the areas around hand pumps at Jindatola, Bodalkasa, Kodebarra, and Chorkamara respectively. Unemployed youths from Mangezari participated in all programmes which were led by Mukund and Salimkumar. Water had spilled over while people drew from the hand pumps and had stagnated, leading to proliferation of mosquitoes and insects. Our teams cleared the area, removing scum and organic growth and dug canals to drain away the water. Photos below: the programme at Kodebarra 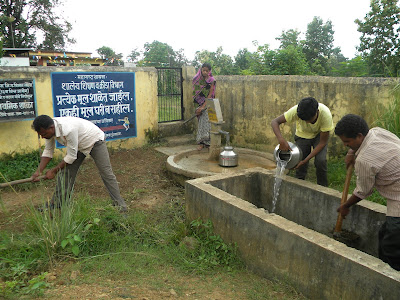 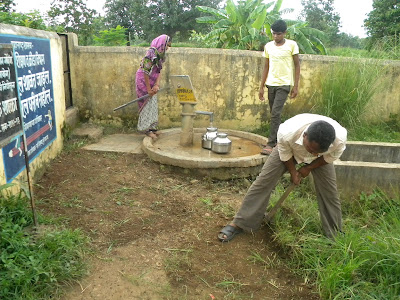 Our team joined the Forest Department in night patrols on the roads from Mangezari to Kodebarra, Mangezari to Jindatola and Mangezari to Govindtola on August 1, 4, 5, 7, 8, 13, 14, 16, 21, 26 and 29.  Patrolling was intensified after a leopard and tiger were spotted on August 3, 6, 14 and 21 as officials wanted to monitor their movement and ensure that they were safe from poachers. Three cattle were killed, reportedly by the tiger, near Mangezari while the leopard made on cattle kill near Govindtola, according to local Forest Department officials.

Besides our staff, volunteers from a youth club at Mangezari also joined in the patrols. The youth club was set up with our assistance and is mentored by Mukund Dhurve.

During the month, our team organized 4 anti-plastic programmes to clear polythene/plastic litter from the villages. The programmes were organized on August 7, 8, 14 and 21 at the village of Berdipar, Thadezari, Bolunda and Kodelohara respectively. Mukund, Salimkumar and Jivraj organized the programmes which were attended by villagers and students. The plastic litter has been kept in our Mangezari office and will be sent to Tiroda for recycling.

The Government of Maharashtra has issued the buffer zone notification for the Navegaon-Nagzira Tiger Reserve. Following this, doubts have sprung up in the minds of villagers as to how they will be affected by the notification. Due to the doubts, some villagers are opposing the notification. To clear these doubts and misgivings, we organized a total of 7 awareness programmes during August in 7 villages – Chorkamara, Thadezari, Shriramnagar, Sodlagondi, Umarzari, Alezari and Tigaon.

There were 5 environment education programmes during the month. Mukund used the classroom visits to conduct awareness programmes about snakes and snake bites. During the monsoon, snakes come out of their pits as these get flooded and there is greater occurrence of humans being bitten by snakes. Our awareness programmes focussed on teaching the students how to identify venomous and non-venomous snakes. Mukund also explained to the students what to do when bitten by snake.

There were 6 film shows on nature and wildlife conservation in August. 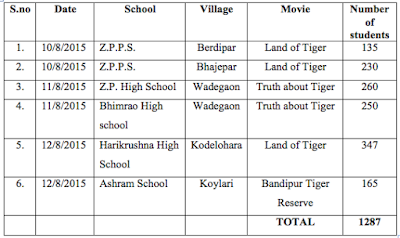 On August 26, we organized a meeting of 4 women’s self-help groups (SHGs) at Mangezari. During the meeting, the SHG members were given details about various government-sponsored schemes such as rearing of goats, dairy farming, tailoring etc. 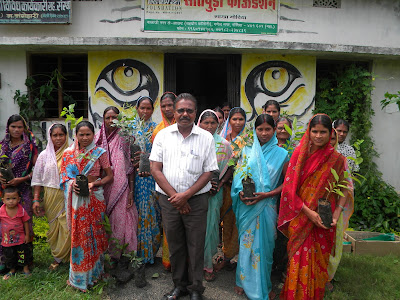 After the programme, Satpuda Foundation distributed saplings of sitafal (custard apple) to the women. The saplings were supplied by the Forest Department. Photo above:

There were 6 health camps in August in which 282 patients received free treatment. 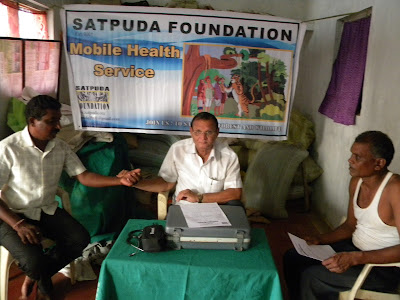 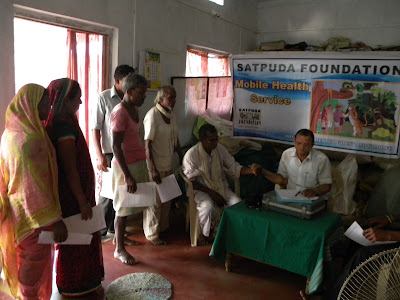 Photos: Dr Zanzad at our free health camp at Kodebarra

Posted by Rajashree Khalap at 5:01 AM