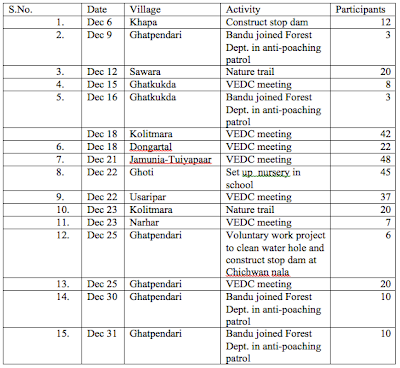 During December, we conducted two voluntary work projects to promote water conservation.
On December 6, field assistant Dilip Lanjewar led a team of 12 villagers of Khapa village in a programme to build a stop dam on a stream adjoining the village. The water body created by the stop dam will help recharge the water table in the area where there are many fields. It will also benefit domestic as well as wild animals.

On December 25, field assistant Bandu Uikey led 6 youths of Ghatpendari village in a programme to clean a water body and repair a stop dam at Chichwan nala. Leaves and other organic matter had accumulated in the area and scum covered the water. The team cleaned the water body. They also repaired an adjoining check dam. This water body is around 4 kms from Ghatpendari village and lies in the core area. It is used by wild animals. Spotted deer and sambhar are regular seen around the water body.

As part of our community assistance activities, we arranged for a visit by members of EDCs from 4 ranges – East Pench, West Pench, Chorbahulli and Salaighat – to villages in our area of operations to explore the possibility of livelihood from lantana.

On December 11, Anoop Awasthi, Range Forest Officer (RFO) Chorbahulli, Shri M B Pokale, Shri Deshpande (RFO, Salaighat), and other local officials of the Forest Department along with around 20 villagers visited Sawara to see products made from lantana. Villagers in Sawara learned the craft of making products from lantana through programmes organized by us.

After this programme, we also organized a visit by this team to Usaripar village where some villagers have shifted to growing lemon grass and citronella in their fields where earlier they used to grow rice and wheat. Lemon grass and citronella are bitter grasses which wild animals do not eat and they are used to make soaps, perfumes and other cosmetics. Thus, besides providing lucrative returns, these grasses are also safe from wildlife depredation.

On December 12, Dilip led 20 children from Sawara village on a nature trail in the jungle adjoining the village. On the trail, Dilip spoke to the children about the importance of trees and wild life in our eco system. A similar nature trail was organized for 20 children of Kolitmara on December 23 by Bandu Uikey.

In December, our team conducted environment education programmes in 12 schools in our area of operations. 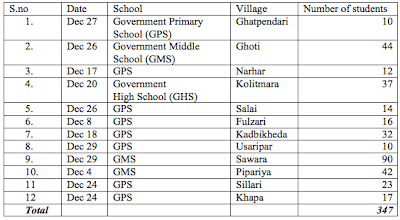 During the month of December, a tribal dance group from Sawara village earned Rs 19,000 through their performances. The group, which was formed under our guidance, earned Rs. 8,000 through 4 performances at resorts. We had spoken to the managers of the tourist resorts to organise the dance programmes. The group also earned Rs.11,000 by performing at Nagpur for Ministers of the State Government, who were in the city for the Assembly session.

There were 7 film shows on nature and wildlife conservation in December. 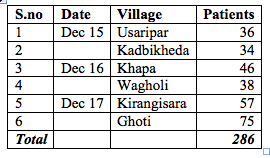 Posted by Rajashree Khalap at 8:06 PM No comments: