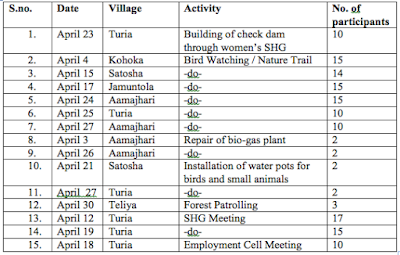 On April 23, SF organized a voluntary work programme to build a dam over a stream flowing along the village boundary 200 meters from forest area. 10 women from a local self-help group (SHG), “Shrushti” participated in the programme. The dam was build with the help of sand filled gunny bags, which helps in retaining water in the area for longer period. In the summers, the water body formed by the dam is the only water source in the area. The water body formed by the dam will provide water to both domestic animals (in daytime) and wild animals (at night). Spotted deer, sambar are spotted regularly and predators occasionally at night. This SHG is mentored by SF.

In April, six nature trails were organized by Niranjan for the children of Turia, Kohoka, Satosha, Jamuntola and Aamajhari villages. On the trails, he spoke to them about the various birds and wild life found in the area. He also explained their role in nature. 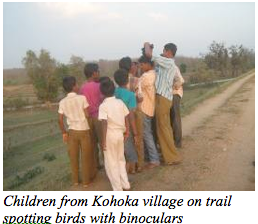 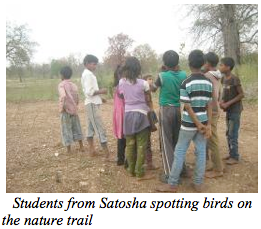 On April 3 and 26, Niranjan assisted two families from Aamajhari village in repairing their bio-gas units which had become inoperative due to lack of maintenance, Niranjan restarted the units and guided the villagers on how to maintain them properly. Use of bio-gas will reduce dependence on the forest for firewood. Photos below.

In April, SF continued its initiative to recycle plastic bottles by using them as bird feeders and water pots.

On April 28, a meeting of unemployed youths was organized at Turia. SF’s Employment Cell officer Mr. Ajay Poddar and Mr. Anoop Awasthi spoke to the youths and guided them on various employment opportunities.

In April, we provided field intelligence to the Chief Conservator of Forests (CCF) and Field Director (FD) of Priyadarshini Pench Tiger Reserve about violations in the buffer zone like operational brick furnaces. He was also informed about the Rhesus Macaques gathering along the National Highway no. 7 (NH7) due to tourists feeding them. We also pointed out some improvements which needed to be made to warning signs installed by the Forest Department along the Highway. All the topics were addressed by him and a letter was given to concerned ranger for proper actions to be taken on the illegal furnaces. Corrected warning boards were installed on NH7 to prohibit feeding of wildlife. 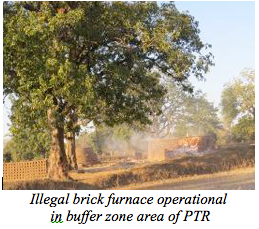 We also spoke to Janpad Panchayat, Kurai, CEO Mr. Parihar about lapses in solid waste disposal. The waste disposal tanks built through this project are not utilized properly; plastic waste was also dumped in the pits. The matter was raised with Collector and CCF and FD PPTR in LAC meeting. LAC has assured immediate action on the issue.

There were no environmental education programmes held in April due to summer vacations at the local schools.

There were no film shows on nature and wildlife conservation during April due to annual exams in schools, followed by summer holiday.

We held 8 medical camps in April, in which 211 patients were treated.

Posted by Rajashree Khalap at 12:27 AM No comments: