On October 10, a male tiger was found dead at compartment 590 near Chorgaon. Local officials said the tiger had been dead for at least 4-5 days and there were wound injuries on the body. The officials said it appeared to have been injured in a fight with another tiger.

On October 27, a tigress was found dead in a nallah off the Waghai road inside Tadoba. The tigress appeared to have died of poison from a snake-bite according to forest officials and the veterinarian at the scene.

·      2 nature trails for village children
·      Anti-plastic programmes in 3 villages
·      Cleaning of surroundings next to well in one village
·      Follow-up to plantation done during the monsoon in 3 villages
·      Cleaning of soak pit in one village
·      Environment education lectures in 10 schools – attended by 368 students
·      Film shows on nature and wildlife conservation in 10 villages, attended by 493 people
·      Medical camps in 6 villages  - 414 patients treated
·      Two visits to Bhagwanpur to follow up status of relocated villagers

On October 23, Bandu led 23 students of ZP Primary School, Kondegaon on a nature trail in the jungle adjoining the village. Bandu, who earlier worked as a guide in Tadoba-Andhari Tiger Reserve, helped the children identify local flora and fauna and explained the need for nature and wildlife conservation to them. A similar trail was organized on October 30 at Mudholi in which 26 students participated.


As part of our community assistance programmes, we organized a voluntary work project on October 16 at Sitarampeth in which 2 village youths and 2 students joined Bandu in cleaning the area around a well used to draw drinking water. Spillover water had gathered around the well, creating a bog in which mosquitoes and insects were proliferating. The team dug a channel to drain the spillover water and then cleaned up the litter and debris
Similarly, on October 25, Bandu led a programme to clean a soak pit next to taps in the school campus at Chorgaon.

During the month, Bandu also 3 organized programmes to follow-up on plantation done during the monsoon months. Earlier in the year, we had arranged for planting of saplings in different villages. Now, we are following up to ensure that the saplings get enough water as well as protection from grazing livestock. Details are given in the table above.

There were 10 film shows on nature and wildlife in October. 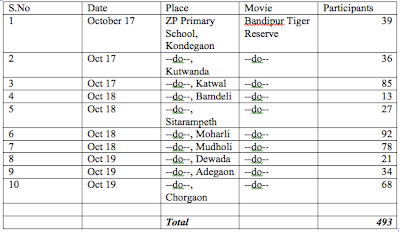 There were health camps in 6 villages in October.

Posted by Rajashree Khalap at 2:51 AM No comments: