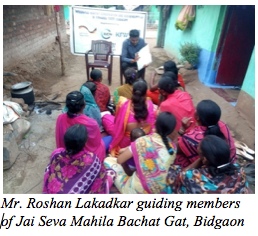 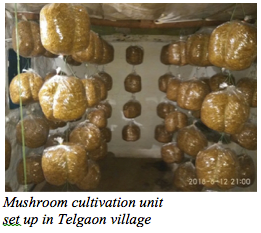 During August, Satpuda Foundation assisted two unemployed young villagers -- Shubham Gaidhane and Suchit Thakare – in setting up a mushroom cultivation unit in Telgaon village. Shubham and Suchit had taken part in mushroom cultivation training provided by Satpuda Foundation earlier, in July. A unit of 100 kg production capacity was set up by the young villagers. They invested Rs 2,000/-. Satpuda Foundation team also assisted them to market the mushrooms. They have received orders for their mushrooms from supermarkets and vegetable vendors in Nagpur. They will be selling the mushrooms at a rate of Rs 250 to Rs 300 per kilogram.

On August 11, Satpuda Foundation team rescued two non-venomous snakes (rat snakes) from Telgaon village. The snakes were inside houses and hence needed to be captured and released. On July 12, Satpuda Foundation had shown a documentary on snake bite prevention and snake conservation in the weekly bazaar of Telgaon village. As a result, the villagers, instead of killing the snakes, informed our Satpuda Foundation team and requested help. Mandar Pingle immediately informed Forest Guard Mr. Pauljhagade of Kalmeshwar range. After the safe capture of the snakes, Satpuda Foundation’s team and Pauljhagade released them in a forest patch away from the village. Young villagers from Telgaon helped keep the villagers calm during the rescue. Later Mandar requested villagers to keep their homes and surroundings clean to avoid such conflicts.

On August 31, Nilesh assisted Mr. Eknath Ranji Telkar, a villager from Jaitgad near Bidgaon in Saoner taluka, to apply for compensation for a goat killed by a leopard. On the night of August 30, a leopard killed a goat in the farm of Mr. Eknath. Eknath requested Nilesh to help file for compensation. Nilesh informed the Round Officer for Kelvadh, Mr. Rewatkar, and Forest Guard Mr. Munde. Nilesh helped Mr. Eknath to prepare an application along with the necessary documents. He also requested Mr. Eknath to not leave his livestock in the open during the night to avoid such conflicts in future.

Posted by Rajashree Khalap at 3:49 AM No comments: 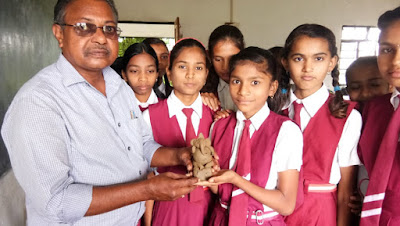 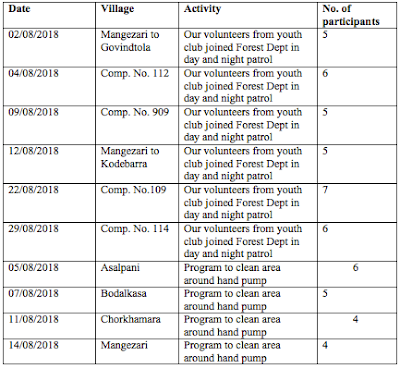 Our team organised 4 community assistance programs on August 5, 7, 11 and 14 to clear areas around hand pumps at Asalpani, Bodalkasa, Chorkhamara and Mangezari. Unemployed young villagers from Mangezari participated in all the programs, led by Mukund and Jivraj. Details of the programs are given in the table above.

Our team joined the Forest Department in day and night patrols on several occasions during the month. Details are listed in the table above. Besides our staff, volunteers from a youth club at Mangezari also joined in the patrols. The youth club was set up with our assistance and is mentored by our Conservation Officer Mukund Dhurve.

During the month, our team organised 4 anti-plastic programs to clean polythene/plastic litter from villages. The programs were organised on August 5, 7, 11 and 14 at Asalpani, Bodalkasa, Chorkhamara and Mangezari villages respectively. Mukund and Jivraj organised the programs which were attended by villagers and Village Eco-Development Committee (VEDC) members. The plastic litter has been kept in our Mangezari office and will be sent to Tiroda for recycling.

The Government of Maharashtra has issued the buffer zone notification for the Navegaon-Nagzira Tiger Reserve. Following this, doubts have sprung up in the minds of villagers as to how they will be affected by the notification. Due to the doubts, some villagers are opposing the notification. To clear these doubts and misgivings, we organised a total of 4 awareness programs during August in Umarzari, Thadezari, Pitambartola and Sodlagondi.

There were 5 classroom education programs in August 2018. 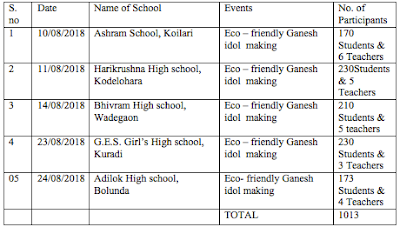 There were 6 film shows on nature and wildlife conservation during August.

During the month, we helped seven villagers get temporary employment with the Forest Department. 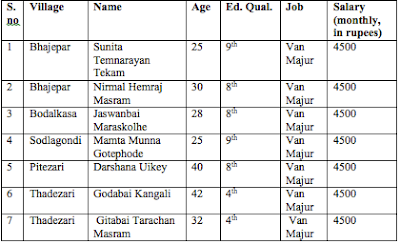 During the month, we helped 10 villagers attend a program which taught them housekeeping and hospitality skills suitable for the hotel industry. The program was held at the Pratham Arora Centre for Education at Sillari, Pench and was funded by the Pench Tiger Conservation Foundation. 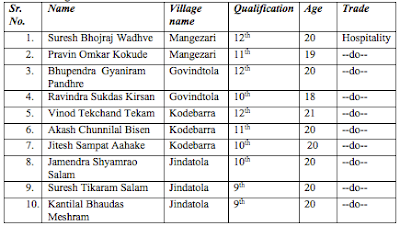 There were 6 health camps in August.

Posted by Rajashree Khalap at 6:58 AM No comments: