Highlights
·      One water conservation activity – voluntary work project to build check dam near Sitarampeth
·      Two awareness programmes on forest fires at Moharli and Junona
·      2 community assistance voluntary work projects – one programme to clean area around well at Mudholi and one programme at Dewada to clean area around hand pump
·      Anti-plastic programmes in 3 villages – Katwal, Kutwanda and Adegaon
·      Follow-up to plantation done earlier at Dewada, Kondegaon and Bhamdeli
·    Classroom visits to 10 schools as part of our environment education program – attended by 291 students
·      1 nature trail for students of Sitarampeth
·      Identified and sent 18 youths from Chorgaon and Bamdeli to Chandrapur for training in poultry farming
·      Health camps in 5 villages – 216 patients treated
·      2 visits to resettled villages of Jamni and Navegaon to follow up on status of  villagers 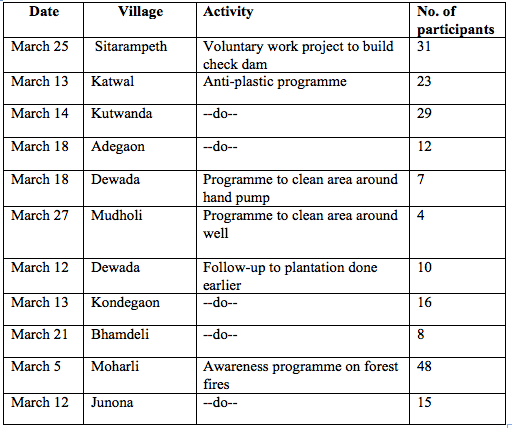 On March 5 and March 12, Bandu organized awareness programmes on forest fires at Moharli and Junona respectively. At these programmes, he spoke about the harmful effects of forest fires and the need for villagers to assist in fighting such fires. Photos of the Moharli programme below.

As part of our water conservation work, Bandu organized a voluntary work project on March 25 to build a check dam around 1 km from Sitarampeth on a stream in the jungle. Five adult villagers, two youths, 2 teachers and 22 students from the village’s Zilla Parishad Primary School (ZPPS) joined hands with Bandu in the programme. The resulting water body will benefit wildlife. Blue bulls, wild boars and chital are regularly seen in the area. Photos below: volunteers filling bags with sand to make the dam.

On March 13, Bandu organized an anti-plastic programme at Katwal in which 23 students of the village’s ZP Primary School participated. Bandu explained the harmful effects of plastic on the environment and the need to keep plastic litter and waste buried so that they aren’t blown away into jungle areas. The children first cleared the main road of the village of plastic litter and waste and later cleared the school premises as well. Photo below: the clean-up drive at Kutwanda.

Two other anti-plastic programmes were organized -- at Kutwanda on March 14 and at Adegaon on March 18.

Bandu also organized 2 community assistance programmes during the month. In both places water, which had spilled over while people drew from the well or hand pump, had stagnated, leading to proliferation of mosquitoes and insects. Our teams cleared the areas, removing scum and organic growth and dug canals to drain away the water. On March 18, he organized a programme to clear the area around a hand pump at Dewada. 7 youths from the village joined Bandu in the programme. A similar programme was organized on March 27 at Mudholi to clean the area around a well. 3 youths from the village joined Bandu in this programme.

On March 12, Bandu organized a programme at Dewada to follow up on plantation of saplings done last year. This is to ensure that saplings planted during the monsoon are alive and have sufficient protection from grazing livestock. 10 students from the village school joined Bandu in the programme. A similar programme was organized on March 13 at Kondegaon in which 16 students participated and on March 21 at Bamdeli in which 8 students participated. Photo below.

During the month, our team made classroom visits to 10 schools to educate children about nature and wildlife conservation.

On March 19, Bandu organized a walk in the forest for the students of Sitarampeth ZP Primary School. On the nature walk, in the forest adjoining the village, Bandu taught the students how to spot and identify birds. He also spoke to the children about the importance of nature and wildlife and the need for conservation. 21 students joined Bandu on the nature trail.

On March 21, World Forestry Day, Bandu organized a programme at Kondegaon ZP Primary School in which he spoke to the children about the importance of forests and the need to preserve forests. He also organized a drawing competition for the students, with the theme being nature and forests. 19 students took part in this programme. Photo below.

In March, we sent 18 youths to Bank of India’s Rural Self-Employment Training Institute (R-Seti) at Chandrapur for a training programme in poultry farming. R-Seti had invited us to identify suitable candidates from villages in our area of operations for this programme. We conducted a survey, spread awareness about the programme in villages to youths and explained the potential for income generation to the youths. The programme, which is residential, is funded by R-Seti. The programme ran from March 10 to March 15.

These are the details of the youths who attended the programme: 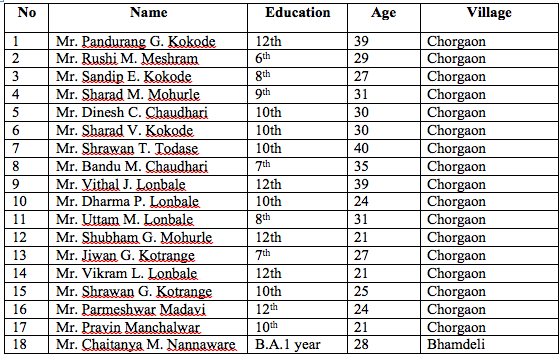 There were 5 health camps in March.

Posted by Rajashree Khalap at 9:46 AM No comments: