Pench and Tadoba in winter, January 2011

These are from last week.

I was in Sawra (Pench) to follow up on the sewing and lantana projects. Finished work quicker than I'd expected and reached Turiya by 3 p.m., so instead of wasting the rest of the day I decided to go into the park for a safari. Since it was a weekday the place was blissfully empty and the resort manager drove me himself in their gypsy. 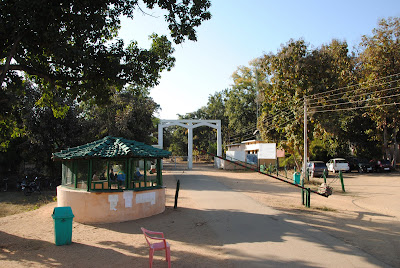 Haven't seen Turiya gate this deserted for a very long time! Actually since I had arrived late, the other tourists had already gone into the park - but there were only eight vehicles in the park, nothing like the hideous crowds on weekends. 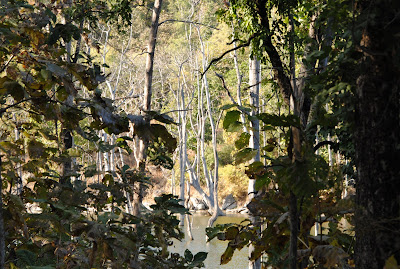 One of the many streams and water bodies of Pench. 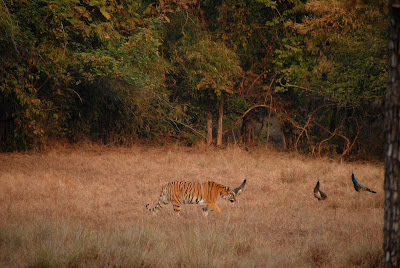 It was early morning and we had been in the park just half an hour. We were in the Moharli range, looking at an unusually large flock of peafowl - at least 12 hens in one group - when suddenly I saw through some bushes - stripes!! I'd always had a secret wish to spot a tiger before the guide or driver did, and it finally happened that morning. It was pure chance and not due to any skill on my part, as the guide and driver are obviously much better than me at wildlife-spotting. But I felt very pleased with myself anyway. 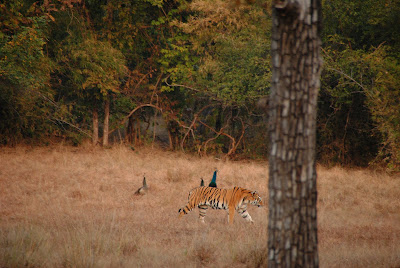 Other than one peacock who flew calling hysterically into the trees, none of the birds moved away from the tigress. Though of course they kept a close watch on her as she sauntered past. 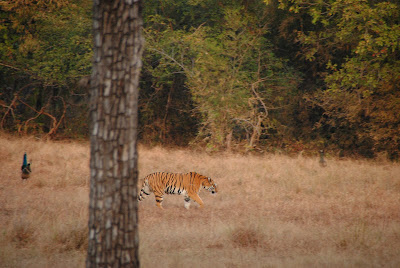 She is one of three tigresses in Tadoba who have cubs right now. 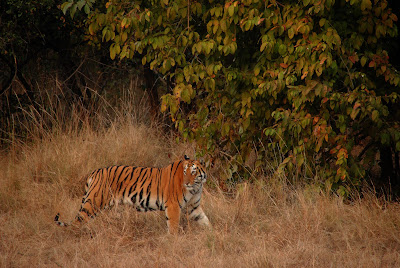 Of course all tigers are beautiful, but some are more beautiful than others...This is Miss Universe 2011. On par with my tigress of January 2008. 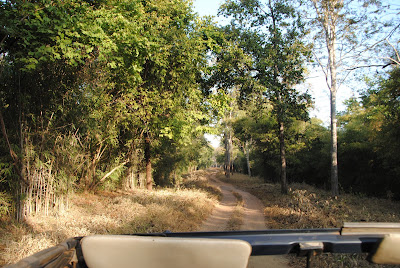 The last time I was in Tadoba, it was scorching hot, parched and dry. Now it's green and beautiful. And of course very cold for a Mumbaikar like me. 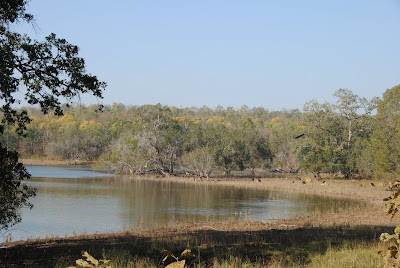 Tadoba Lake...Also a haven for birds including raptors. 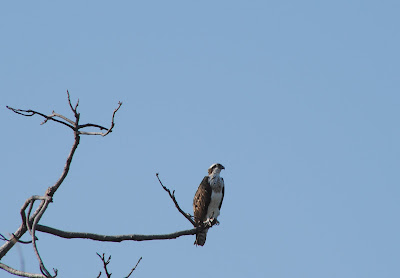 I saw an Osprey (above) and a Crested Serpent Eagle on this trip. On other trips I've seen a Grey-headed Fish Eagle and Oriental Honey Buzzards near the lake. 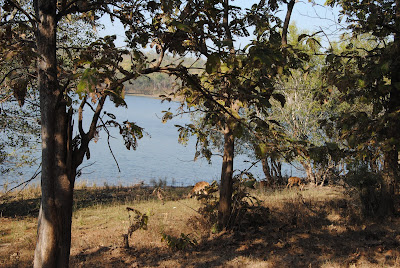 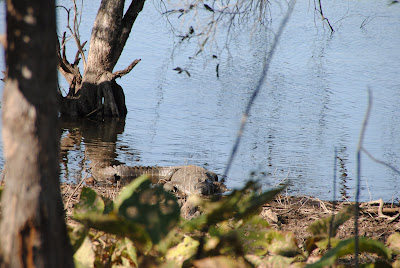 Nearby a large Mugger (Marsh Crocodile) basks in the sun. As the morning gets warmer, they come out of the water to bask on the bank. We saw another one some distance away. 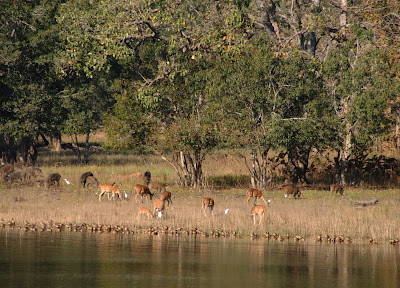 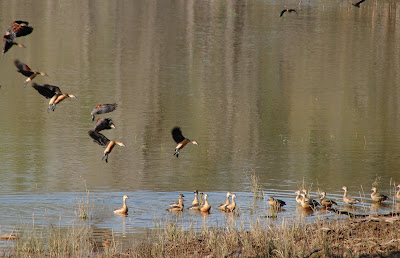 Lesser Whistling Ducks - there was a large flock that flew round and round the lake before landing together. 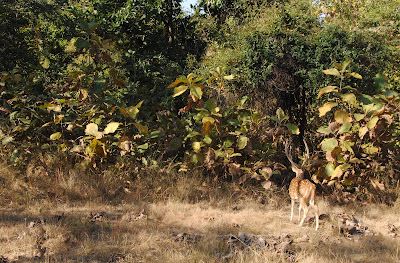 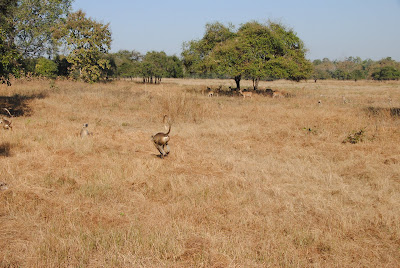 Pandharpaoni meadow. Last year there was a forest fire that burned the whole meadow. It's believed that villagers started it (they light fires to clear the ground to facilitate mahua collection).

Four villages still remain in the core of Tadoba; they are scheduled for resettlement as soon as all the villagers agree. 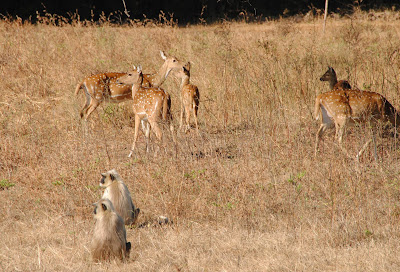 Pandharpaoni meadow: Langur and Chital, who often stay together 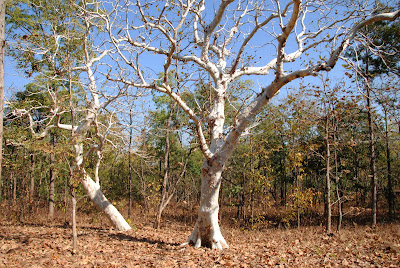 Ghost trees - I've forgotten the botanical name but it's a kind of Gum tree and the bark changes colour through the year. They look like bones in the forest, bare and white at this season till summer. In the evening they're a beautiful but eerie sight, shimmering through the other trees. 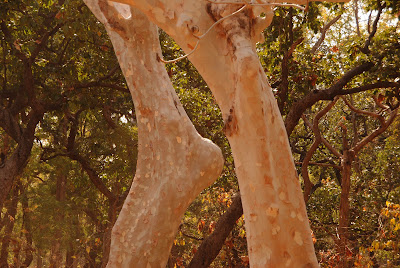 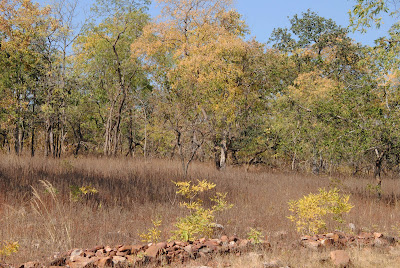 I wish I could remember the names of plants... 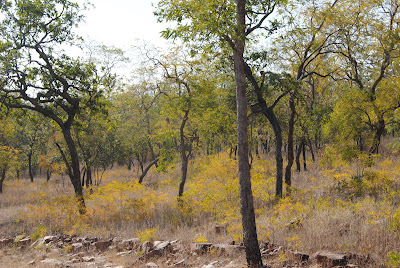 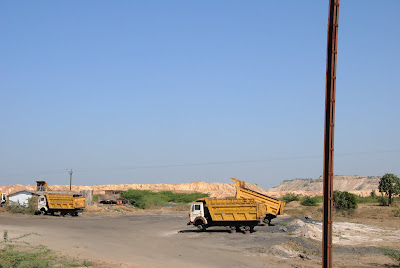 A short distance from the park, you'll see this horrible sight: a huge black hole, the Padampur open cast mine. By evening the air is almost opaque and it's tough to breathe. I pass it on every trip but I just can't get used to it. 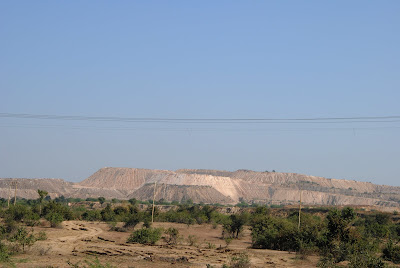 Posted by Rajashree Khalap at 2:27 AM No comments:

Email ThisBlogThis!Share to TwitterShare to FacebookShare to Pinterest
Labels: wildlife 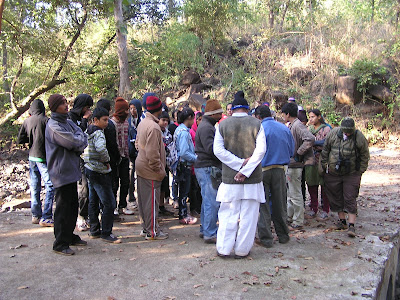 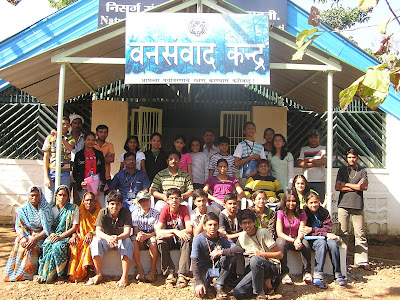 Around 23 students from Standard 6 to 8 participated in the training course. This special course has been launched by NCSA for schools since 2009, and Pune-based Krishnamurthy Foundation’s Sahyadri International school and Indus School of Indore had received the benefit of this course earlier.

(Photo attached:Students in the forest of Melghat and group picture at Community Resource Centre at Muthawa, Melghat)

Posted by Rajashree Khalap at 9:01 AM No comments: