On 27 February, Satpuda Foundation organised a one day program to train women in making non-precious jewellery and accessories. 15 women of 5 different Self-Help Groups (SHGs) from Telgaon participated in this training program.

During the program, Sawani Wakharkar, owner of 'The Creative Kona” from Nagpur, showed the women various designs of necklaces and earrings that are in demand in Nagpur. During the program, Mandar Pingle and Nilesh Telang spoke to the SHG members about market opportunities and how they could earn additional income. The trainees prepared various types of jewellery items during the training program. The Sarpanch (chief) of the village, Mrs. Chanda Gaydhane, also helped encourage ladies to take up jewellery-making as a livelihood option.

On 2 February, Satpuda Foundation celebrated 'World Wetlands Day 2019' at Sarvodaya Vidyalaya of Umari (B) village in Saoner taluka in the Pench-Bor wildlife corridor. Students of classes 7, 8 and 9 were taught the importance of wetlands, their biodiversity, natural processes and their importance to human life by Nilesh. He also explained to them how wetlands play a crucial role in maintaining the ecological balance and help to prevent the adverse effects of climate change. Teachers of the school, Mrs. Nikhalle, Mr. Raut and Mr. Chaudhari were also present.

On 24 February, Mandar and Nilesh took 14 students of Telgaon village on a nature trail near Kolar Lake near their village. During the trail, Mandar taught students how to spot and identify birds. Some of the birds spotted on the trail included bay-backed shrike, red-vented bulbul, yellow eyed babbler, and lesser cormorant.

Nilesh helped students identify flora during the trail. Students collected information on trees and plants and will prepare a field guide of trees to be used during future nature trails. When the students reached Kolar lake, Mandar explained to them the importance of the water body for both humans and wildlife, and why it is necessary to keep it pollution free.

Many of the students who had participated in an earlier nature camp at Pench Tiger Reserve, remarked that the biodiversity is considerably less near their village compared to the Tiger Reserve. The students have planned to repeat the trail later this month and will pick up plastic trash as well.

On 21 February, Abhijit Dutta, Assistant Director for Satpuda Foundation, visited Bidgaon and Telgaon villages of the Pench-Bor corridor and interacted with members of women’s Self-Help Groups (SHGs) from the villages. During the meeting, a further action plan to start micro-enterprises for these SHGs was discussed. Members of Jai Seva Mahila Bachat Gat have shown interest in starting a food processing micro-enterprise while members of Gayatri Mahila Bachat Gat are ready to undertake training in tailoring. These SHGs will continue with their existing activity of making paper bags.

On 22 February, Satpuda Foundation took Prakash Uikey, an unemployed young villager from Bidgaon, to Nagpur and taught him techniques of marketing paper bag products being made by women’s self help groups. Prakash has decided to take up the marketing of paper bag products. During the visit to Nagpur, he met with wholesale vendors and retail customers and provided them with samples of paper bags. During the visit, he also managed to sell 200 paper bags worth ₹550/- and get an order from a wholesale dealer from Itwari market in Nagpur.

On 20 February, Satpuda Foundation was felicitated for its livelihood and environmental awareness activities being carried out under the IUCN's tiger corridor project during the Shivaji Jayanti Mahotsav in Telgaon. The Sarpanch of the village, Mrs. Chanda Gaydhane, felicitated Satpuda Foundation for organising training programs on mushroom cultivation, making of paper bags and formation of women Self Help Groups. She also appreciated our efforts to inculcate awareness about the environment among school students through classroom programs and nature camps at Pench Tiger Reserve.

Posted by Rajashree Khalap at 6:29 AM No comments: 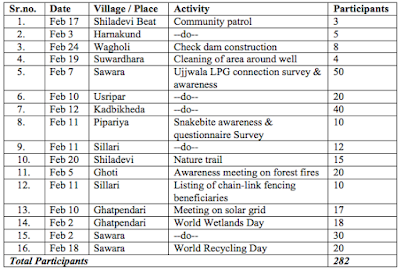 On February 24, a check dam was constructed in Wagholi by Dilip and women volunteers from the village. This will help ensure availability of water for nearby farms in the village throughout the year.

The check dam will also be a water source for nocturnal wildlife in the area.

On February 19, Balkrishna motivated villagers to volunteer for a program to clean the area around a well in Suwardhara. Such cleanliness drives ensure that the cattle or villagers don’t suffer from any illness due to water stagnation. It also helps prevent contraction and possible spreading of any disease from livestock to the wildlife.

On February 17, Balkrishna led a team of four Village Eco-Development Committee (VEDC) members from Shiladevi village on a foot patrol in the forest near their village. The VEDC members looked out for signs of illegal tree felling or poaching during the patrol in compartment no. 211.
Dilip joined the Forest Department staff on a foot patrol in the Harnakund beat on February 3. These community-based patrols are supplemental to the regular patrols being done by the Forest Department.

On February 20, Dilip organised a meeting in Ghoti to make villagers aware about the negative impacts of forest fires on the local biodiversity, air quality, farmlands, and the implications for climate change. Dilip motivated the women to inform the Forest Department about wildfires and also told them to send young villagers to such spots to assist the Forest Department.

On February 10, an awareness meeting was held in Ghatpendari regarding renewable energy. Issues related to the solar grid, set up earlier in the village, were discussed with the villagers. The operators for the two mini grids installed in the village were present along with the beneficiaries of this initiative.

World Wetlands Day was celebrated on February 2 at Sawara and Ghatpendari by Dilip and Balkrishna respectively through programs with school children. Our team explained the importance of wetlands to school children, and the need to conserve local wetlands.

In February, 17 school education programs were conducted by Dilip and Balkrishna in which students were given lectures on man-animal conflict, biodiversity conservation, climate change and other issues related to nature conservation. A total of 374 students attended these programs. 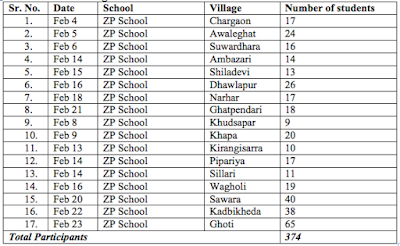 A total of 151 students and villagers attended these programs.

Satpuda Foundation has donated desktops as well as laptops to the Zilla Parishad School in Sawara village and has been conducting IT education program for the students free of cost since 2013. Basic computer skills are taught to the students to make them feel comfortable with the technology and improve their IT skills.

Sita Uikey, a resident of Sawara village works on an honorarium basis for Satpuda Foundation to teach the students.

Four such classes were held in February.

On February 5, Dilip conducted a meeting with SHG members in Ghoti. He discussed making cloth and paper bags and mushroom cultivation with the SHG members.

On February 19, Dilip conducted a meeting with SHG members in Khudsapar. He discussed making cloth and paper bags with the SHG members. He also provided training to SHG members on how to make paper bags.

Six free medical camps were held in February in which 201 patients were treated.

Posted by Rajashree Khalap at 4:00 AM No comments: