Highlights
·      Two programmes to clean water holes at Moharli and Khutwanda
·      Two programmes to place water pots for birds at Kondegaon and Khutwanda
·      Follow-up to plantation done earlier at Sitarampeth, Bhamdeli, Moharli and Adegaon
·      Fire awareness programmes in 2 villages – at Junona and Mudholi
·      Two conservation rally programmes at Adegaon and Sitarampeth
·       Drawing competition programme in 1 village on World Forest Day
·      1 youth placed as gypsy driver at Moharli
·      Classroom visits to 7 schools as part of environment education programme – attended by  194 students
·      2 visits to check on status of relocated villagers of Jamni and Navegaon 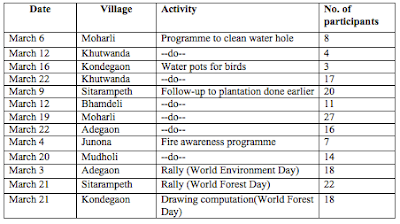 On March 6, Bandu organized a programme to clear a water hole at Moharli. The water hole was clogged with organic waste and was overflowing. Bandu and 8 youths of the village cleaned the water hole. A similar programme was organized on March 12 at Khutwanda in which 4 youths from the village joined Bandu.

As the rains have not yet started, and the temperature is high, birds are struggling for water. Bandu organized programmes to put up pots with water for birds in 2 villages – Kondegaon and Khutwanda.

On March 9, Bandu organized a programme at Sitarampeth to follow up on plantation of saplings done last year. This is to ensure that saplings planted during the monsoon are live and have sufficient protection from grazing livestock. 20 students from the village school joined Bandu in the programme. Similar programmes were organized on March 12 at Bhamdeli in which 11 students participated, on March 19 at Moharli in which 27 students joined and March 22 at Adegaon in which 16 students participated.

During March, Bandu made 7 classroom visits to speak to students of village schools on various aspects of nature and wildlife conservation.

One youth got a job as a gypsy driver thanks to our assistance.

Posted by Rajashree Khalap at 5:49 AM No comments: