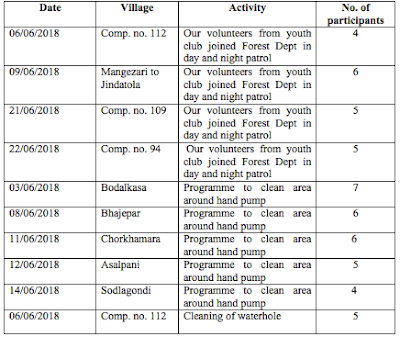 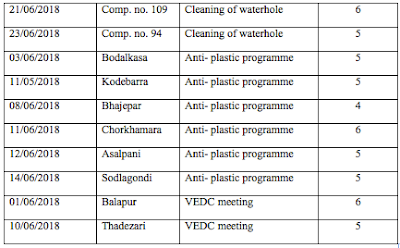 Our team organised 5 community assistance programmes in June 3, 8, 11, 12 and 14, to clear areas around hand pumps/wells at Bodalkasa, Bhajepar, Chorkhamara, Asalpani and Sodlagondi. Unemployed young villagers from Mangezari participated in all programmes, which were led by Mukund and Jivraj. Details of the programmes are given in the table above.

Water had spilled over while people drew from the hand pumps and had stagnated, leading to proliferation of mosquitoes and insects. Our teams cleared the area, removing scum and organic growth and dug canals to drain away the water. Our team joined the Forest Department in day and night patrols in Compartment no. 112, 109 and 94 and on the road linking Mangezari to Jindatola. Besides our staff, volunteers from a youth club at Mangezari also joined in the patrols. The youth club was set up with our assistance and is mentored by our Conservation Officer Mukund Dhurve.

Our team joined the Forest Department in day and night patrols in Compartment no. 112, 109 and 94 and on the road linking Mangezari to Jindatola. Besides our staff, volunteers from a youth club at Mangezari also joined in the patrols. The youth club was set up with our assistance and is mentored by our Conservation Officer Mukund Dhurve.

During the month, our team organised 5 anti-plastic programmes to clean polythene/plastic litter from villages. The programmes were organised on June 3, 8, 11, 12 and 14 at Bodalkasa, Bhajepar, Chorkhamara, Asalpani and Sodlagondi villages respectively.

Mukund and Jivraj organised the programmes which were attended by villagers and village eco-development committee (VEDC) members. The plastic litter has been kept in our Mangezari office and will be sent to Tiroda for recycling.

The Government of Maharashtra has issued the buffer zone notification for the Navegaon-Nagzira Tiger Reserve. Following this, doubts have sprung up in the minds of villagers as to how they will be affected by the notification. Due to the doubts, some villagers are opposing the notification. To clear these doubts and misgivings, we organised 2 awareness programmes during June in Balapur and Thadezari.

On June 5, we celebrated World Environment Day at Mangezari in a programme which involved local staff of the Forest Department and 26 villagers. During the programme, we spoke to the villagers about the environment, impact to humans from environmental degradation and the need for conservation.

On June 23, we organised a workshop at Kodebarra on fisheries in which Government officials gave information about various state schemes to promote fisheries in villages. Mr. Shahare, from the Fisheries Department, attended the programme in which 13 villagers of Mangezari, Jindatola, Kodebarra and Govindtola were present.

During the month, we assisted villagers in building 9 compost pits at Bagadband and Asalpani as part of our ongoing programme to promote organic farming and reduce the use of chemical-based fertilizers in areas adjoining forests.

There were 2 classroom programmes on environment education in June.

There were 6 film shows in June. 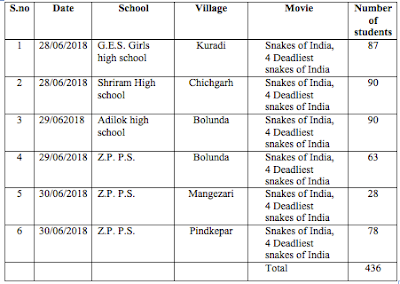 On May 12th, 16th and 30th, we organised cleanliness and anti-plastic programmes with villagers and students of Zilla Parishad (ZP) school of Katwal, Khutwanda and Bhamdeli village. Programmes were organised to clean the areas in and around the villages and around the hand pumps and wells as they choke the drainage. Wild growth and litter provide shelter to snakes and scorpions and attract scavengers.
On May 30th, we prepared 100 saplings of species like Bahera, Chinch, Babul, Neem etc. with the help of local children. 9 children from Khutwanda village participated in the preparation of the saplings. The saplings are stored in Zilla Parishad School’s campus and will be planted during the monsoon.
Celebrations:
World Migratory Bird Day: On May 14th and 15th, we organised programmes to celebrate World Migratory Bird Day 2018. These included activities like bird watching, nature trail, classroom lecture and drawing competition.  Children from Mudholi and Khutwanda villages participated in the programmes and learned about migration of birds. A total of 35 children participated in the activities.
International Day of Biodiversity: On May 23rd, we organised classroom lectures, presentation and biodiversity conservation awareness rally in Mudholi village. Children learned about floral and faunal diversity of central Indian landscape through the activities. Children chanted slogans in Marathi during the rally like “Vagh Vachwa, Jungle Vachwa” “Ek Mul, Ek Jhaad” etc. A total of 70 students participated in the activities.
World Recycling Day:  On May 17th, we organised an anti-plastic drive and awareness rally about recycling and its importance. More than 40 children participated in the programme, which was held in Katwal village.
Programmes: 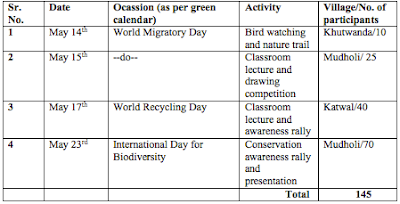 
We organised 2 Self-Help Group (SHG) meetings and 5 Village Eco-Development Committee (VEDC) meetings, focusing on alternative livelihoods which would reduce dependence on the forests. 113 villagers attended these meetings.
In the VEDC meetings, we discussed and explained short- and long-term benefits of fodder plantation, cattle stall feeding to reduce grazing pressure on forest areas. We also discussed and encouraged farmers to adopt organic farming.


We introduced the villagers to district-level vocational training and employment schemes like four-wheeler driver training and hospitality courses under Deen Dayal Upadhyay Gramin Kaushal Yojna (DDUGKY) etc.
Details of the programmes are given below: 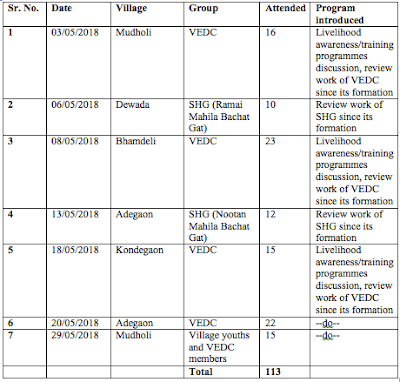 Mobile Health Unit:
Team:  Dr. Govardhan Bhasme, MHU driver: Mr. Gajendra Shanware, MHU coordinator: Mr. Shailendra Shanware
6 camps were organised by us in May in which a total of 375 patients got free treatment and medicines.

Posted by Rajashree Khalap at 6:45 AM No comments: