·      1, 200 saplings planted Moharli, 500 planted in Mudholi, 500 in Sitarampeth, 150 in Adegaon
·      Education programmes including showing of nature documentaries and lectures were conducted in 7 schools with 364 students
·      Our Mobile Health Unit treated 220 patients in 5 villages
·      Solar-powered water pump and inverter system was installed in relocated village Bhagwanpur with Selco in conjunction with Conservation Action Trust.

Sapling plantations and checking on condition of saplings planted in the previous month were conducted throughout the month of August.

1,200 saplings were planted by the Gram Panchayat of Moharli, while the saplings in most of the other villages had been planted in the previous month. Both Mudholi and Khutwanda had asked for more saplings from us for plantation and we provided 1,500 to Mudholi and 500 to Khutwanda.

Checking on the saplings that were planted in July and early August, we found those in Mudholi, Kondegaon, Katwal and Bhamdeli doing very well, as most of these had been planted in fenced off areas, were given tree-guards when planted by roads, or were planted by villagers in house compounds.

There were seven film shows in August. 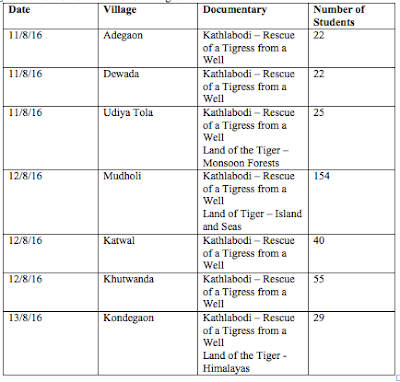 Students at all schools watched the Tiger Rescue from the Well in Kathlabodi most animatedly. They also enjoyed the Islands and Seas episode of the Land of the Tiger Documentary series, especially when there were colorful reef fish being shown, they enjoyed this much more than the Mountains and Rainforests episodes.

On 19/8/16, Bandu gave a lecture to the children of the Mudholi Zilla Parishad School on the denizens of the forests, how they interact with one another, and how they all have a place and a role in the ecosystem.

Posted by Rajashree Khalap at 1:09 AM No comments: 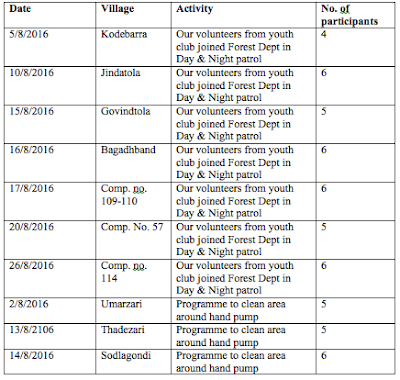 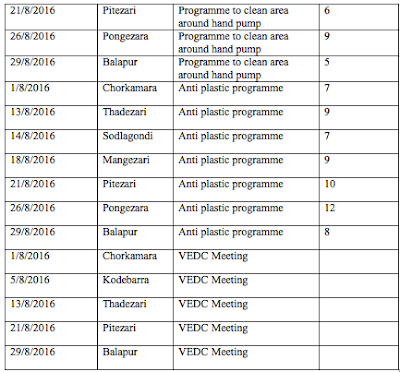 Our team organized 6 community assistance programmes in August to clear areas around hand pumps at Umarzari, Thadezari, Sodlagondi, Pitezari, Pongezara and Balapur respectively. Unemployed youths from Mangezari participated in all programmes which were led by Mukund and Salimkumar. Details of the programmes are given in the table above.

Besides our staff, volunteers from a youth club at Mangezari also joined in the patrols. The youth club was set up with our assistance and is mentored by our Conservation Officer Mukund Dhurve.

During the month, our team organized 7 anti-plastic programmes to clean polythene/plastic litter from villages. The programmes were organized on August 1, 13, 14, 18, 21, 26 and 29 at Chorkamara, Thadezari, Sodlagondi, Mangezari, Pitezari, Pongezara and Balapur villages respectively. Mukund, Salimkumar and Jivraj organized the programmes which were attended by villagers and village eco-development committee (VEDC) members. The plastic litter has been kept in our Mangezari office and will be sent to Tiroda for recycling.

The Government of Maharashtra has issued the buffer zone notification for the Navegaon-Nagzira Tiger Reserve. Following this, doubts have sprung up in the minds of villagers as to how they will be affected by the notification. Due to the doubts, some villagers are opposing the notification. To clear these doubts and misgivings, we organized a total of 4 awareness programmes during August in 5 villages – Chorkamara, Kodebarra, Thadezari, Pitezari and Balapur.

There were 6 education programmes during August 2016. 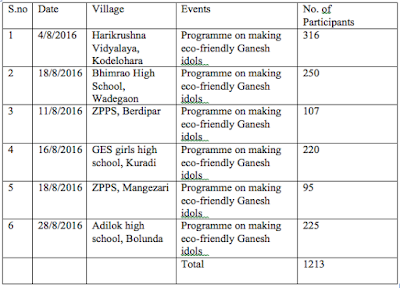 There were 6 film shows during the month of August.

There were 6 health camps in August at which 126 patients received free treatment.

Posted by Rajashree Khalap at 12:18 AM No comments: