New volunteer Kirti Chavan recently went to Tadoba-Andhari Tiger Reserve to help at the Mobile Health Unit camps. Some of his photos from the trip... 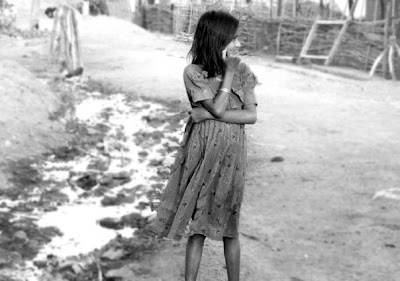 Above: A pensive little girl at one of the villages 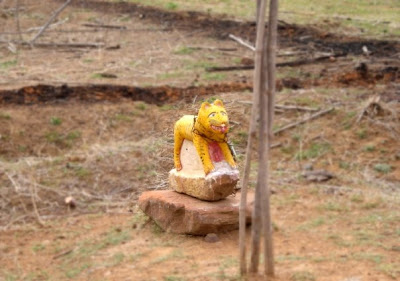 Above: A memorial for a village woman who was killed by a tiger at this spot. There is a lot of human-animal conflict in this region. 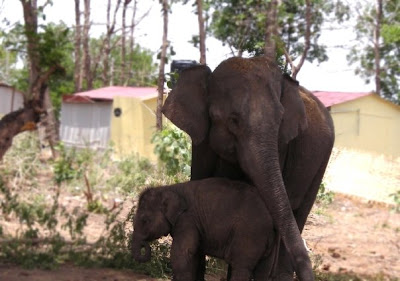 Above: One of the camp elephants with her baby 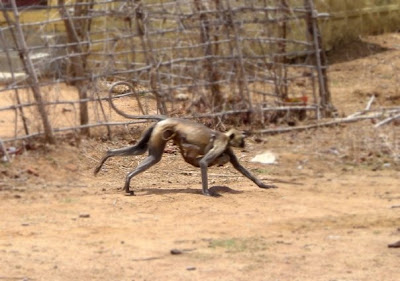 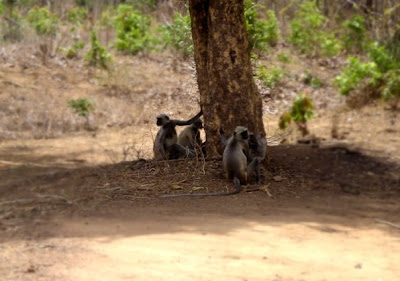 Photos: Kirti Chavan
Posted by Rajashree Khalap at 9:45 AM 2 comments:

Email ThisBlogThis!Share to TwitterShare to FacebookShare to Pinterest
Labels: programmes and initiatives, wildlife 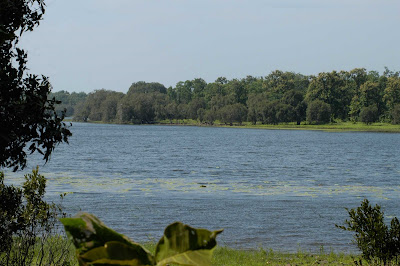 Above: These calm and placid waters are the lair of the Marsh Crocodile, or "Mugger."
If the tiger rules the jungle, it is this creature who rules the water...
at least in Tadoba Lake! 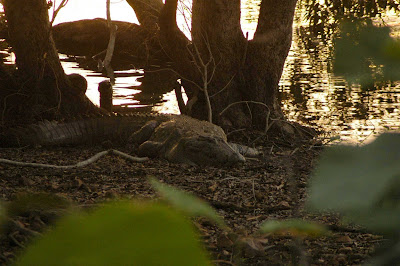 Above: On most of my Tadoba trips, my Mugger sightings have been restricted to heads bobbing briefly above the water, or equally brief glimpses of scaly backs.
Last monsoon I got lucky. I saw several of these magnificent creatures at the edge of the lake. 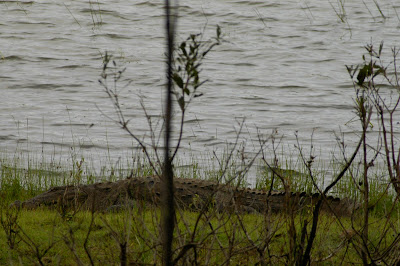 They seem to come from a much more ancient world than this; from the age of reptiles. 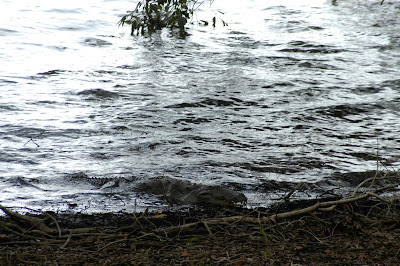 This one reminded me of a poem from Alice's Adventures in Wonderland...

"How cheerfully he seems to grin,
And neatly spreads his claws,
And welcomes little fishes in,
With gently smiling jaws!"

Posted by Rajashree Khalap at 8:06 AM No comments:

Pictures from some Mobile Health Unit camps this year. 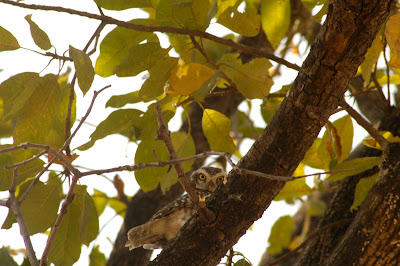 Above: An interested onlooker at one of our camps in Bori-Satpuda Tiger Reserve, March 2009 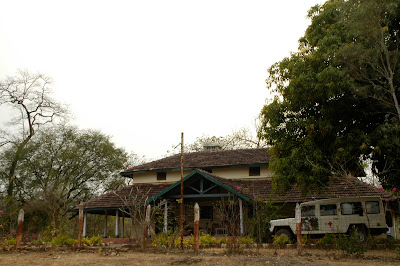 Above: Forest Rest House at Bori, where we stayed in March (Bori-Satpuda Tiger Reserve) 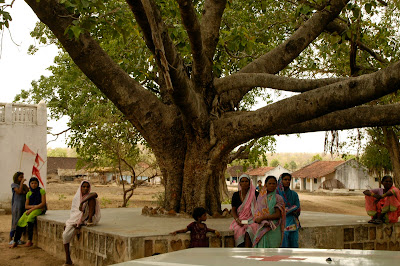 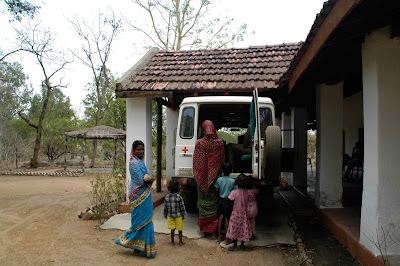 Above: Camp at Kumpani Resthouse 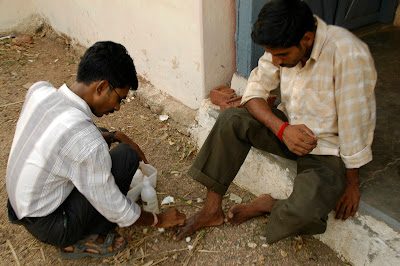 Above: Health Assistant Prashant Holey dresses a wound at Patri, Pench. This man had accidentally made a deep cut in his foot with a hoe, while working in the fields. 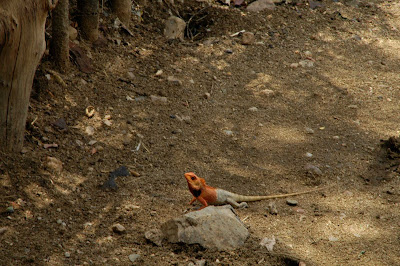 Posted by Rajashree Khalap at 5:39 AM No comments: 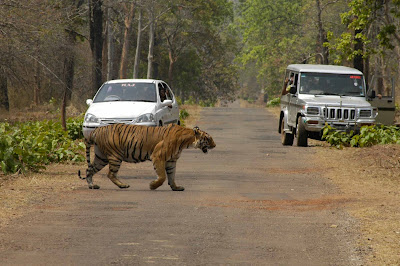 Being a frequent tiger tourist myself, I know I don't really have the right to criticize others infected with "Tigermania." If you've ever visited a tiger reserve, you'll know what this is. It's a kind of insane desperation to see a tiger, to get at least one "sighting" of our magnificent jungle king before we leave the forest. It makes us drive madly around the paths, chasing pug marks and alarm calls of prey animals. Every time another vehicle passes by, we anxiously scan the passengers' faces: you can tell from their smug smirks or dejected looks whether they've seen one or not. 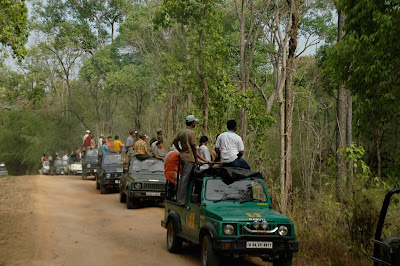 Tigermania doesn't affect only the wildlife enthusiast or the animal lover or the cat-worshipper (I am all three). Everybody gawks stupidly when the stripes finally appear, and even the noisy picnickers actually shut up. Whether it's the powerful muscles - something you'll never see in a zoo - or the expression of cold ferocity, somehow this animal holds one spellbound. Just for that brief span of time, I think we realize who is really at the top of the food chain...much as we insolent apes may have tried to usurp that position.

The unfortunate tiger has always been the victim of his own charisma, hasn't he? While our ancestors wanted to hang his pelt on their walls, today we obsessively want to witness a bit of his life at any cost, ignoring the fact that he is a cat and therefore rather fond of privacy and solitude. We want to see him crossing a road, taking a nap, having a bath, hunting, mating, yawning, anything. 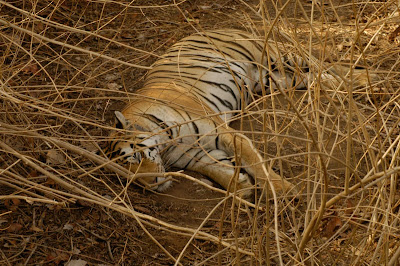 There is even this obsession some people have with wanting to cuddle tigers, something I don't understand at all, but it sends hordes of tourists to the famous, or perhaps infamous tiger temple in Thailand, to pose cheek-to-cheek with an animal which in its natural state would be ripping their heads off (my personal opinion here, so please don't attribute this to Satpuda Foundation!)

Some wild tigers seem to have got used to the attention and perhaps they dismiss us as harmless pests, something in the background like crows. But I have seen many others who are clearly distrustful of us, as any sensible animal should be, and though they make brief appearances, they keep a wary green eye on us at all times. 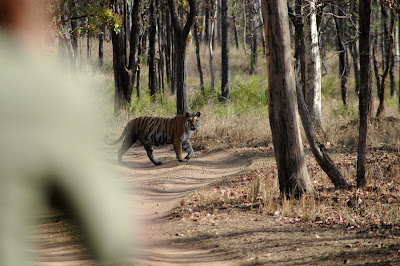 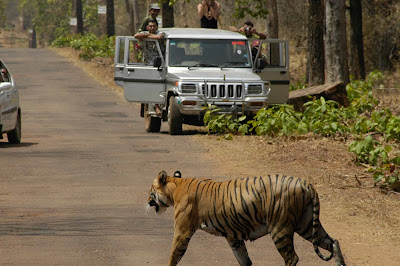 I am torn between a strong urge to stare as long as possible, and an equally strong one to leave them in peace.

And when it's time for us tourists to leave, I feel secretly relieved. Because for some hours at least, the forest will belong to the real animals again.

Let's not be tiger pests!

These are a few rules I follow when I visit wildlife areas.
They're simple - we can all follow them.

Posted by Rajashree Khalap at 12:20 AM No comments: