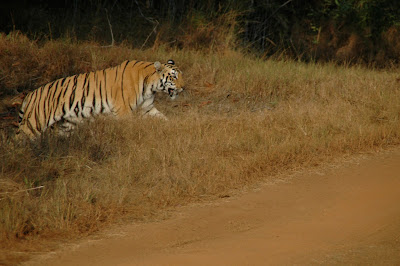 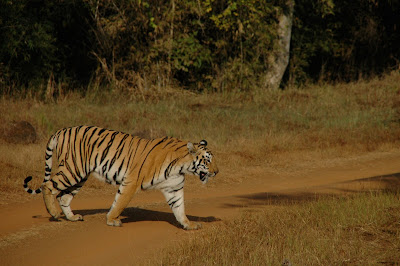 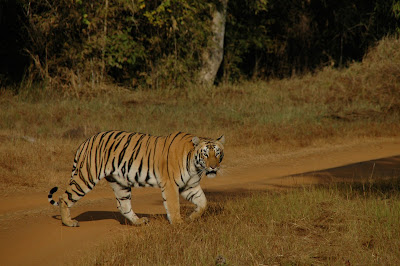 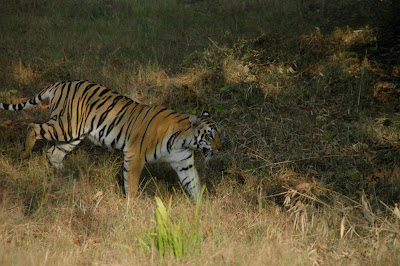 This is the most beautiful tiger I've ever seen. My photographs don't do her justice at all.

She crossed the path about fifty feet away from our gypsy, in Tadoba-Andhari Tiger Reserve last year. Around 9 a.m. on a Sunday morning.

Even after centuries of civilization, the aura of the top predator can still turn us into jelly. The one word that kept coming to mind as she passed was "flawless."

All too soon she disappeared back into the forest...leaving us gaping and speechless.

Once we got our speech - and our breath! - back, we could talk of nothing else all day. Seeing that tigress was a high point in my life, and for my friends too. In fact she was also a turning point for me, because she made me decide to work for tiger conservation.

I've never seen her again, on subsequent trips to Tadoba. But I keep looking.

And I'm eternally grateful for those few fleeting moments when her world overlapped with mine.
Posted by Rajashree Khalap at 9:06 PM 2 comments: 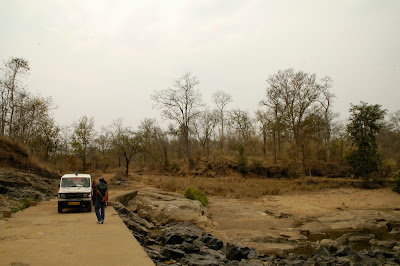 Above: The Mobile Health Unit ambulance 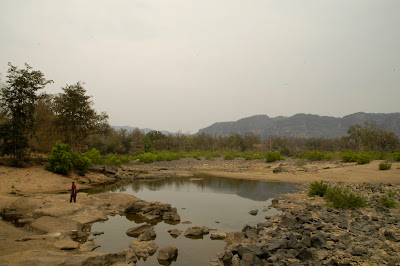 Above: Bori-Satpuda Tiger Reserve - one of the most beautiful places I've ever seen
Below: Tadoba-Andhari Tiger Reserve. The white tree is aptly named "Ghost Tree."


I am not one of those weight-obsessed women, but like many of us I do occasionally grumble about my BMI.

Whenever this happens my husband starts complaining about my complaining. He thinks I’m making too much fuss about a couple of kilos here and there.

“Look at her,” he’ll say, pointing out the most obese woman he can see at that particular moment. “Now that’s fat,” he’ll say triumphantly.

He should have been present at the medical camp at the village of Bamangaon in Tadoba. This was my first volunteering project for Satpuda Foundation and NCSA. At the end of the first hour, I was feeling really and truly enormous.

Here were women in their thirties, forties, fifties, sixties, but with very different and far more serious weight problems than the kind we self-indulgent city women whine about. One by one they stepped on the machine and I recorded shocking numbers on their case papers: 32 kilos…35 kilos…40 kilos…and this included women of average height. The rare healthy one reached 50 kilos. Almost all of them looked undernourished and anaemic, aged before their time.

The children were malnourished too, shorter than city kids, so they looked a lot younger than they actually were. Children who looked not more than ten years old turned out to be fourteen.

As for the adults, most of them didn't know their age.

Mentally surveying the box of clothes I’d collected for these villagers, I realized my blunder. Most of them were too large! 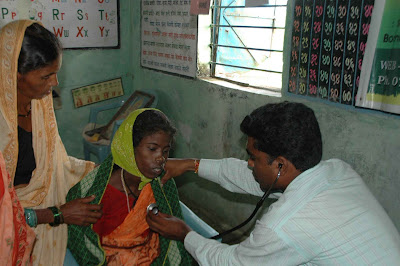 Travelling with our Mobile Health Unit to these remote villages in and around tiger reserves, I always feel I’ve crossed a vast distance, much much greater than I’ve actually covered geographically. I’m completely cut off from my old world with its familiar paradigms. My few little whinges shrink away and suddenly appear trivial. Now I enter a place where the problems are age-old, raw and very basic. It’s like travelling back in time…these villagers live without simple things we take for granted: electricity, health services, nutritious food, instant communication with the rest of the world, even soap - to name a few.

Then there are the unique risks of living in a tiger habitat such as Tadoba-Andhari: deer raiding your crops, or the danger of your livestock or you falling prey to the big cat. Forest villagers obviously do not crave the sight of these animals as we city-dwellers do: another huge difference between us. One of our patients in Pench was a man who had laid electrical wires around his fields to prevent wildlife from entering – an illegal practice that is unfortunately quite common – and while drunk had stepped on the wire himself. He had a deep gash in his sole that had turned septic. 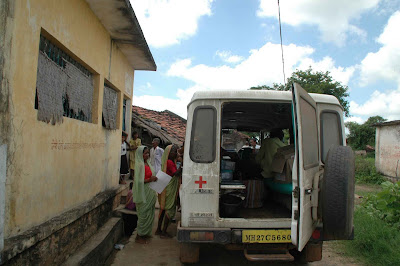 The patients’ surnames at my first camp were completely new to me, and I had to ask people to repeat them once or twice before I could spell them properly. It took some time for me to get the hang of it. These are common surnames among the Gonds and other tribes, and among the so-called “scheduled” castes of that region. The fact that they sound so alien is a telling sign that these people have not yet entered mainstream Indian life. After all, in modern urban India, we kind of know from a person’s surname where he or she comes from, and we meet or hear of or read about people from every corner of the country. Or so I thought until I came here. I hope that in my lifetime we really do become an inclusive and egalitarian society, and that we will one day meet Gonds, Korkus and other aborigines on an equal footing everywhere we go.

The only community work I’d done in the past had been rabies prevention education in Mumbai slums many years ago. This work with forest-dwellers is very different, and fascinating in its way.

Below: One of the health camps in Tadoba. In this picture: SF Conservation Officer Bandu and Health Assistant Prashant Holey, who organizes the MHU 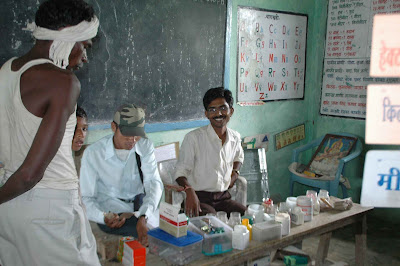 After each of these short jungle breaks, my city life seems unreal for a while. The Vidarbha Express chugs me back to “civilization”…and I’m back with a jolt in Mumbai. I reach home around the same time as the morning papers, something I haven’t seen for a while. I’ve just been away six days, but it seems like much longer. Coming back from a place where malnutrition is the norm, it’s quite funny to go through the burblings of a gourmet journalist about caviar and wine, the antics of Bollywood stars and sleazy politicians, and of course, my favourite: weight loss tips from some diet guru…

The whole urban circus, with the usual performers. People who simply don’t matter or even exist, in my other life.

It is the tiger that takes me back there, again and again. To work among his nearest human neighbours in whatever little way I can. We have to do everything possible to win their goodwill.

Without that, his end is near – and so is ours.
Posted by Rajashree Khalap at 6:38 AM No comments:

Email ThisBlogThis!Share to TwitterShare to FacebookShare to Pinterest
Labels: medical camps for villagers, programmes and initiatives

It was like a Hollywood thriller. It started with a single call of a sambhar deer which my guide immediately picked up. My city-noises-trained ears couldn’t hear a thing. We quickly reversed the gypsy and went towards the source of the noise – a craggy outcrop of rocks in the jungle. The langoors also had started to call which meant that a big cat was in the area. By the time we reached though all had fallen silent. The few other tourists there moved off after sometime….trying their luck elsewhere. We stayed on for a few minutes more. Just as we were planning to leave, the calls started all over again. Turning around I saw this leopard sitting majestically over the craggy outcrop. I was thrilled because I am one of those unlucky few who never get to see any ‘real’ animals in the wild. And here I spotted a leopard! Leopards, who are more elusive than tigers! In a real beautiful jungle in Pench. It felt like a NGC moment.

No, I was not on a wildlife vacation. In fact I was working. I had volunteered to assist in one of the weekend medical camps organized by SF in villages inside and outside the Pench Tiger Reserve in MP. My wildlife ‘non-luck’ followed me here too and the 6 villages chosen for the med camps this time were all outside the forest area. Usually, SF organizes med camps for villages within the forest reserve. That way you work closely with them, win their trust and a get them to resettle outside….thus lessening the harm to the ecology and conserving the wildlife there.

Just three days out of my regular city life and I came back with so much knowledge about wildlife, the impact of human existence on them, the outlook of the villagers in general and the dedication of the people who put so much effort to save these magnificent animals. Am waiting for my next such weekend work….then perhaps I will even get to see the majestic Royal Bengal Tiger.
Posted by BM at 12:12 PM No comments:

Email ThisBlogThis!Share to TwitterShare to FacebookShare to Pinterest
Labels: programmes and initiatives, wildlife 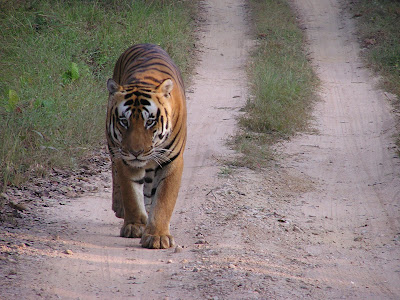 The tiger Bhola pads along a path in Kanha National Park. He is one of the 1300 - 1500 Royal Bengal Tigers left in India, according to the Wildlife Institute of India's 2007 census. That's less than half the number previously estimated.

Bhola means "innocent." And that's what the tiger is, an innocent victim of human greed and error. Only we humans can save him - if we really, sincerely care enough. This is our last chance.

This picture was taken by Satpuda Foundation President, Kishor Rithe.
Posted by Rajashree Khalap at 3:29 AM No comments: