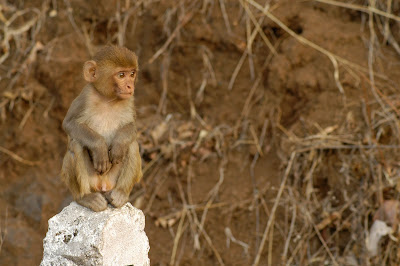 Baby Rhesus Macaque by the roadside. He begged for food for a while, making a cute noise at us and even standing up on his hind legs. Truck drivers and other people have got monkeys into the terrible habit of hanging around in the road for handouts. Many get killed in car accidents thanks to this stupidity. What a pity Indians think it kind to give unnecessary snacks to so many creatures. It would be kinder to leave most of them alone. 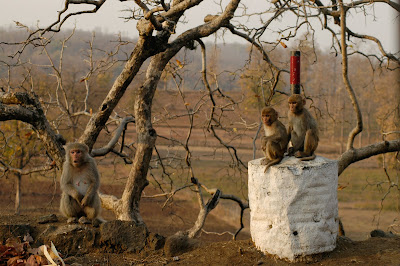 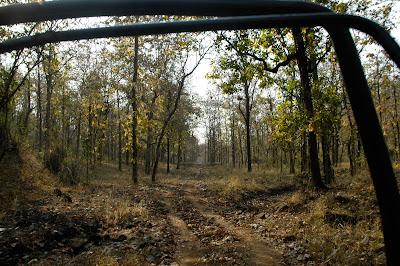 Above: In the forest 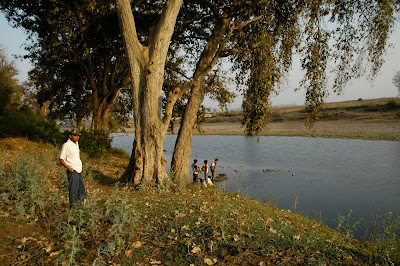 Above: Gajanan, who along with Pradeep conducts the education programme of NCSA in the 39 villages of Melghat's Multiple Use area. This is next to the Sipna river at Semadoh. 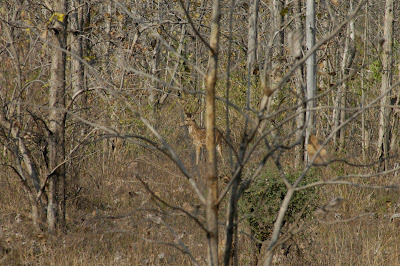 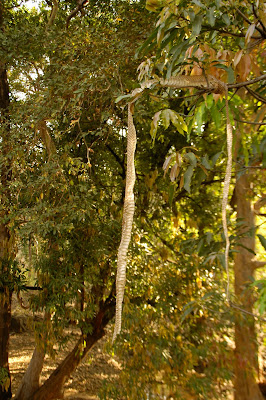 Below: Fallen Mahua flowers. These are used by tribals to make a liquor of the same name. It's ironical that there happened to be a matchstick lying next to the flowers. Villagers often start fires under Mahua and Tendu trees, to "clear" the ground before the flowers and leaves fall. They often "clear" large sections of the forest as well.

I made my first trip to Melghat Tiger Reserve earlier this week. It was a very brief trip, just one and a half days, but there was a lot of new information I tried to absorb in that short time and I am trying to let it all settle into my head!

This was the only SF/NCSA project area I had never visited. So I decided to make a quick visit after going to Pench for some follow-up work (more on that later). It's always a privilege to talk to SF President/founder Kishor Rithe, and I was lucky to have his company for the whole trip. As always I plagued him with hundreds of questions which he answered very patiently. This is such a vast region and the issues impacting the tiger are so varied and complex that my questions will probably never end, but I am certainly a lot clearer in my mind about lots of things - exactly how reforestation is being done at Akot (south of Melghat Tiger Reserve), how barren land is made fertile, agro-forestry, forest legislation from the 1870s till the present day.

The first part of the trip was spent exploring the Community Resource Centre belonging to NCSA. I'll put those pictures in another post. In the evening I accompanied the Duda education van to a village called Chikli. The next morning was spent exploring the tourist zone of the Reserve. This series of images are of the forest and wildlife.
Posted by Rajashree Khalap at 7:52 AM No comments: 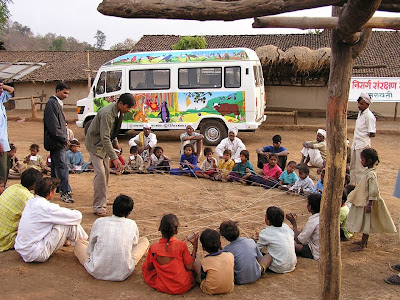 The schedule for NCSA's Duda education van, March and April 2010. For an earlier post about this programme click here.

The Duda van unlike the MHU doesn't return to Amravati/Nagpur after 4 days but travels from village to village for 2-3 weeks, covering all 39 villages in the buffer zone. Volunteers are welcome to join for five or six days or longer if they wish. Here's a post by one of last year's interns, Abhishek Surana, who accompanied the Duda van.

If you'd like to participate, please email vishal.p.bansod@gmail.com and manish.sawankar@gmail.com
Posted by Rajashree Khalap at 11:13 PM No comments:

Email ThisBlogThis!Share to TwitterShare to FacebookShare to Pinterest
Labels: programmes and initiatives

Nature lover Krishna Dave has been a member of our Facebook group "Tigers of the Satpudas" for some time. When she read our invitation to volunteer for the wildlife estimation exercise being carried out by Melghat Tiger Reserve, she jumped at the chance to visit and work in this beautiful forest. Her report about the experience brought Melghat alive for me - I have still to go there! Borrowed from her blog Forestogue: 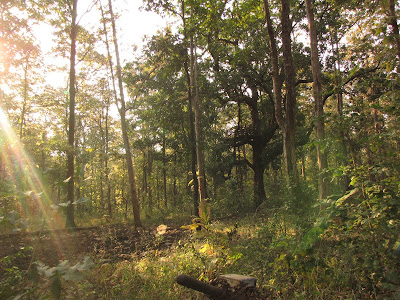 It's been almost a month since (part of me) came back from the forests of Melghat, and ever since then, I have been making plans of going there again...

January 2010 began for many of us with an ever increased concern of losing tigers. At a time when I get wrecked about the dwindling numbers going out of reality - with only 1400 or God forbid minus tigers left, the loss seems inevitable...in the midst of these, when I received an invitation message from Rajashree Khalap of Satpuda Foundation about an estimation exercise, I pounced on the opportunity and got myself to Semadoh, one of the ranges in the three divisions of Melghat Tiger Reserve (1676 sq km). It is located in the northern part of Amravati district in Maharashtra.

Semadoh, as my mum says, is a hindi colloquialism for borders, geographically I cannot say, but metaphorically this place is indeed of "borders," as I could vividly see the two distinct worlds - one that I came from and one that I lived in for seven days.

Travel to Semadoh was a joy ride - from Badnera/Amravati, the landscape on either side of my ST bus was only plains and plateaus and from Paratwada onwards it was only mountains and valley. Indian landscapes have always amazed me with this - anywhere between the radius of 50-60 kms, the landscape just alters and the beauty diversifies. Semadoh is situated on the banks of river Spina.

From 26 January to 2 February, I was scheduled to be in this forest! I was allotted a beat that was under the supervision of Forester Ms Sheetal Dhande, my camera went berserk taking photos when I would see her in the forester's uniform!

The Semadoh range has around 8 foresters, each has been allotted a beat of roughly around 3000 hectares (30 sq kms), along with three guards and around 8-9 choukidars. Semadoh is one of the five ranges in the division Spina, the other two territorial divisions are Gugamal and Narnala. Along with me the beat was supposed to have two more volunteers, who did not turn up.

My home-sweet-home was the checkpost at Kuwapatti (around 10 kms away from the Semadoh village). Less than 100 sq ft accommodated seven of us, with Your Highness having one room all to myself! At times like these I get inspired to write a book titled "This can happen only in India." 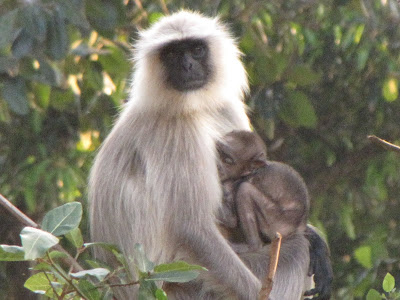 27 January evening, while on a rustic bamboo bench I was cross-examining - how within a span of just 24 hours, I was altogether in a different mental and physical paradigm, with the forest's incessant whistling, dusk falling on treetops, the gridded sky view through a dry canopy, and stars ogling through this grid, in the midst of these glades - was totally ballooned with the thought of being one with the forest for the 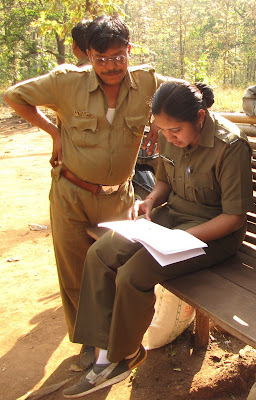 Each day was unique, special and a revelation: the first three days were for carnivorous animals estimation, for which we were given instructions to look for pugmarks, scats and any and all other evidence to estimate the presence of various species of carnivores in our allotted compartment. On an average, every day we climbed (the guards galloped) around 7-8 kms across our allotted area (please see the map below). 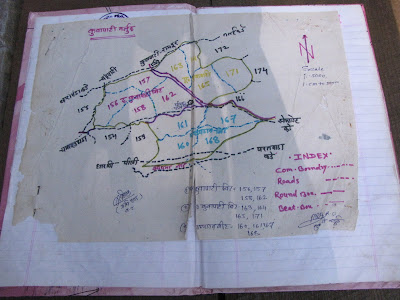 Our day would begin at 6 a.m., starting our march at 6.30, all the guards left in different directions, accompanied by one choukidar.

I was fortunate to accompany one on either day, we usually got back by 12.30 - 1 p.m. to our base camp, to have a bath, eat monstrously, write log, fill up forms, meet our forester, either visit her at her quarters in Semadoh or she would visit us at Kuwapatti, both were equally delightful, as that was the only time when our entire team would be together. The last three days we moved along the transect for the herbivore estimation, the guards and we had instructions to cover (to and fro) an allotted transect of 2.5 kms and thus make our observations. (To make it easier, rather than giving you a rundown on each day, I will provide a consolidated version of my overall observation about the forest a little later in my text). 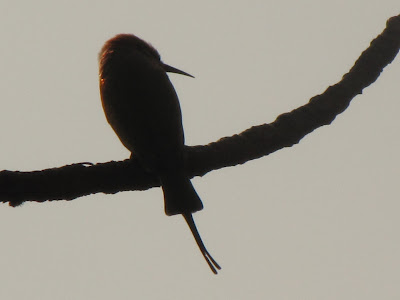 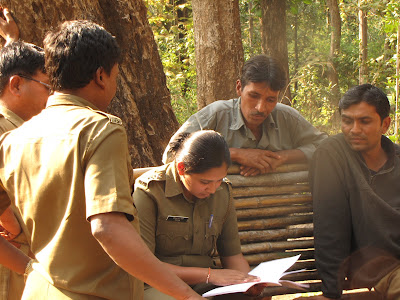 The evenings were for sharing endless talks, as I had a bagful of questions and so did Mr More, one of the guards, who had a strong affinity towards Mumbai - so he would often exhaust me with questions on and about Mumbai. Each time he would pause to dwell on what I said, I tried shifting the conversation asking about the Korku tribesmen, their history, culture and traditions, or to the guards about the forest life, management and their family back home, so this went on for almost all evenings. The evenings were also interspersed with some grocery shopping, cooking, singing folk songs and sighting of flying squirrels - best of all! 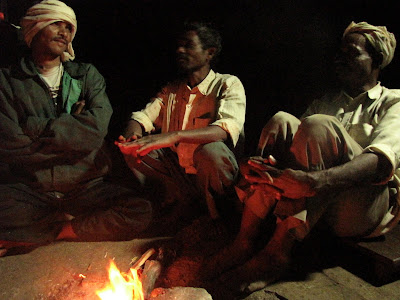 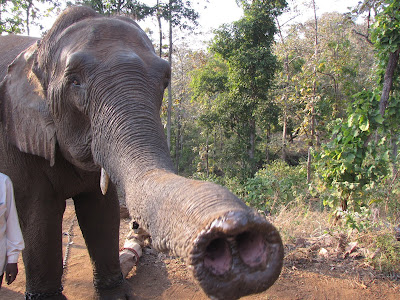 There was an excellent reason why all three guards stayed together in the same checkpost, in spite of them having one for each. The three checkposts wer Pipalpadav, Kuwapatti and Chadupatti, and we kept meandering between Pipalpadav and Kuwapatti as Chadupatti was home to an elephantess - Sundarmala - which indeed she was, a 55 year old beautiful majestic elephant. She gave us a very touching farewell by taking us on a 4 km ride. Wow! Totally electric.

As a southern dry deciduous forest, vegatative diversity varied from around 4-6 tree species per 100 sq mts (approximately), with around 50-60 individuals, the dominant ones are teak, medium sized babool and khaire. The soil is red and with good water retaining capacity. One of the key indicators here is the diversity of shrubs found other than mere lantana, as unlike many forests in the Western Ghats. This certainly confims that there is very little or no human interference. There were some patches, where the diversity was hardly 1-2 species in an area of 100 sq mts. Mainly these were teak and khaire. 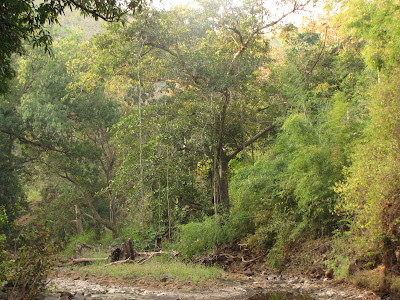 Bamboo bushes though planted were well spread across the forest, one of the two species that I noticed has just begun its fatal bloom. The canopy was unusually green due to the November shower. Bird sightings were comparatively poor; the best sighting was of the Serpent Eagle. 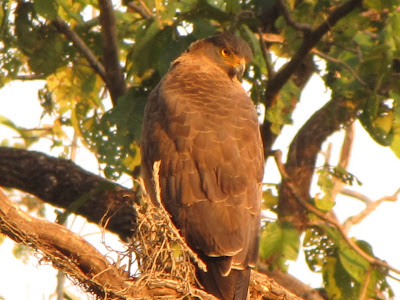 Also I must confess I was more gripped in experiencing the core forest than on tracking bird notes. Crows of treepie, bee-eaters, large and small barbets, racket-tailed, ashy and white-bellied drongos...yet the list is quite full.

There were some patches that we visited in the course of our survey which were now completely undisturbed, we were so prone to get lost in the teak labyrinth, eventually getting better with sense of direction. The choukidars seem to have inbuilt binoculars mounted in their eyes. From nowhere they could sight sambars, chital, bison, barking deer, wild boar etc etc...even identifying pugmarks and scats was done by them. 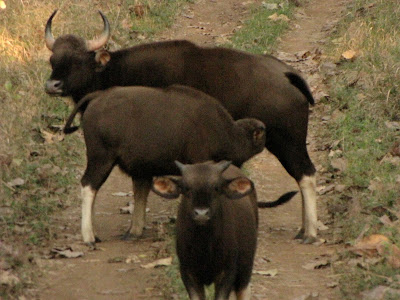 My last day's walk was with Thorat, a guard who was allotted the transect near Pipalpadav. It was known that a tigress (whom they are yet to name) has homed in this place since three years now and not bred even once, a lingering indicator of a shrinking gene pool perhaps??

We found fresh pugmarks of her graceful walk all across the banks of a stream that empties near a waterhole named Fitkaripani. One of the Arjuna barks smelt of her territorial marking; the spray was fresh and filled the space with her presence. Drinking water from this stream made me remotely eperience what it is to call a place "my territory" that is not confined to any department, or state, or country. There is no external significance to this territory, but a survival strategy that has worked over evolution, left the place with this thought of oneness and the water within, that has trickled from across forests - an experience that is simply irreplaceable. 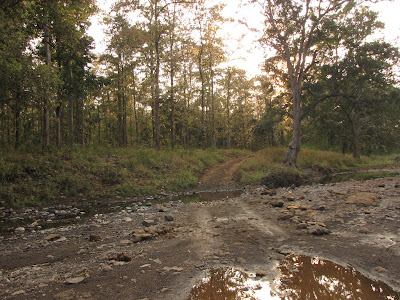 Even after extending my stay, like all good things, this too had to come to an end. While I write this to you, I can imagine that the forest will be in its complete fall, simmering golden forest floor with a clear sky embedded in bare branches, the star-kissed sky and the floating flying squirrels, all of these and more is my ticket back there! 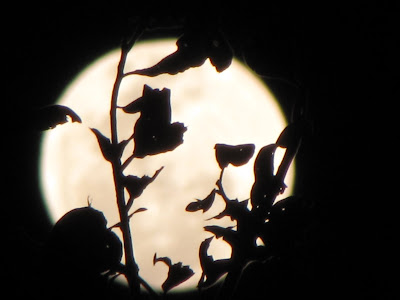 I deeply acknowledge Satpuda Foundation/NCSA for sending this angelic invitation, and also my two best friends who came down after my estimation, for whom I happily extended my stay!

Posted by Rajashree Khalap at 2:44 AM 4 comments: