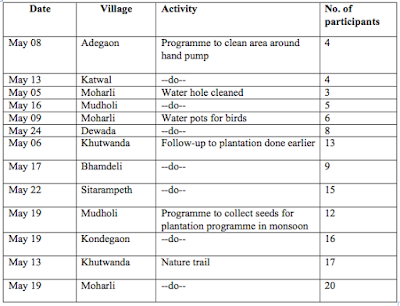 On May 5, Bandu organized a programme to clear a water hole at Moharli. The water hole was clogged with organic waste and was overflowing. Bandu and 3 youths of the village cleaned the water hole. A similar programme was organized on May 16 at Mudholi in which 5 youths from the village joined Bandu.

As the rains have not yet started and the temperatures are still high, birds continue to struggle for water. Bandu organized programmes to put up pots with water for birds in 2 villages – Moharli and Dewada.

On May 6, Bandu organized a programme at Khutwanda to follow up on plantation of saplings done last year. This is to ensure that saplings planted during the monsoon are live and have sufficient protection from grazing livestock. 13 students from the village school joined Bandu in the programme. Similar programmes were organized on May 17 at Bhamdeli and May 22 at Sitarampeth in which in which 9 students and 15 students participated.

Bandu has been organizing programmes to collect seeds for planting once the monsoon sets in. In the process, children are taught about the value of trees and the need to preserve the green cover and increase it. During June, seeds were collected by children in Mudholi and Kondegaon. Seeds collected included karanj, sitaphal, mango, neem and kaner.

On May 13, Bandu organized a nature trail in the jungle near Khutwanda in which 17 students participated. Bandu used the trail to teach the students about local species of plants and wildlife. The trail was also an opportunity to patrol the jungle and check for signs of illicit activities. Similar programmes were organized on May 22 at Moharli in which 20 students participated.

There were no classroom programmes in May as schools were shut for the annual summer holiday.

On May 18, Bandu organized programmes at Katwal and Mudholi at which officials from Bank of India’s Rural Self-Employment Training Institute (R-Seti) spoke to unemployed youths about various livelihood-related training programmes offered by the institute at Chandrapur. Mr. Viresh Trivedi, Director of the institute, spoke to the youths about programmes such as tailoring, repairing of mobile phones, courses in working in beauty parlours, electrical fitting, etc..
R-Seti has been working with Satpuda Foundation to reach out to unemployed youths in our area of operations. So far, we have sent more than 30 youths for various training programmes at R-Seti. The fees have been borne by R-Seti.

Posted by Rajashree Khalap at 9:58 AM No comments: