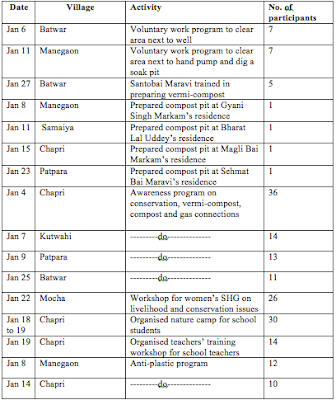 On January 6, Amit and Sampath led a team of 8 people in a program to clear wild growth around a well at Batwar. Due to heavy rains, wild growth had proliferated around the well and access to the well was affected. Our team, which comprised 5 young villagers and 2 women from the village, removed the wild growth and cleaned the area. A similar program was organised on January 11 to clear the area next to a hand pump at Manegaon. Following the cleaning, a soak pit was dug to recharge the water table around the pump.

Our team encourages organic farming as part of our strategy to reduce the impact of chemical fertilisers on fields adjoining prime wildlife areas. Part of our work includes assistance to villagers in setting up vermi-compost tanks and compost pits. During September, we helped 4 villagers dig compost pits – Gyani Singh Markam of Manegaon on January 8, Bharat Lal Uddey of Samaiya on January 11, Magli Bai Markam of Chapri on January 15 and Sehmat Bai Maravi of Patpara on January 23.

On January 27, our team provided training on how to prepare vermi-compost to Santo Bai Maravi of Batwar village. During the program, she was taught to prepare, maintain and use vermi-compost.

We held 4 programs during January to promote awareness about conservation activities in villages. Details are given in the table above.

Shri Dev Singh Saiyam, MLA of Mandla, and Shri Narayan Singh Patta, MLA of Bichiya (Mandla), and Shri Rai Singh Kurveti, President of Janpad Panchayat, Bichiya, attended a meeting with the Gypsy (jeep) and guides’ association at Khatiya gate. The meeting was convened to discuss problems faced by the association and also to address issues such as training of unemployed young villagers and improving the economic conditions of villagers near the gate.

On January 22, our team organised a workshop for women’s Self-Help Groups (SHGs) from 7 villages. The themes addressed at the workshop included conservation and livelihood issues.

On January 8, our team organised an anti-plastic program at Manegaon. Amit and Sampath spoke to the villagers about the harmful impact of plastic/polythene on the environment and motivated them to remove such litter from the village. The team of villagers and students went around the village, collecting plastic and polythene litter/waste, which were then buried in a pit on the outskirts of the village. A similar anti-plastic program was organised at Chapri on January 14.

Education
During the month our team organised environment education programs in 10 schools in the villages in our area of operations. 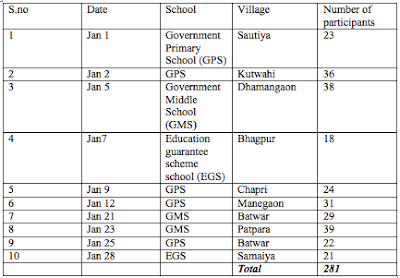 Our team organised a two-day residential nature camp for school students of buffer zone villages on January 18 and 19. The camp was attended by 25 students and 5 teachers. The objective of the camp was to raise awareness among students about wildlife conservation and protection of nature. The students were engaged in a variety of activities to arouse their curiosity about wildlife and to develop a liking for nature. The students participated in a nature trail and went on a bird-watching trip. They were also taken to a waterfall at Gidhli Ghoghra to appreciate the natural beauty of the region. Nature games were used to teach the students important concepts related to wildlife conservation.

On January 19, our team organised a teachers’ training workshop during the nature camp at Chapri. The objective of the workshop was to discuss issues such as climate change, water scarcity and biodiversity loss and what role teachers could play in educating the next generation to face these issues. The workshop focussed on interactive techniques that could be used to make students aware of these issues. Another issue which was addressed was the low level of confidence among students of the buffer region and what could be done to improve the situation.

We helped 3 young villagers get jobs during the month of January. 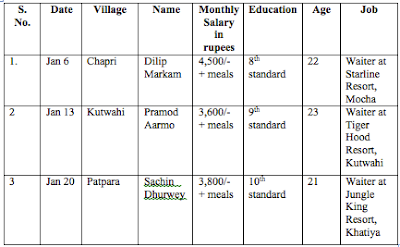 Posted by Rajashree Khalap at 5:02 AM